We have a set of Vogue Knitting Books in the Knitting & Crochet Guild's collections at Lee Mills, and I have noticed ads from a Huddersfield company in the issues dating from the later 1930s to 1950s.  I live in Huddersfield so I was particularly interested in these ads - although many of the well-known  British spinners of knitting yarns were, and still are, based in West Yorkshire, and Huddersfield is an important producer of woollen cloth, I don't know of any existing knitting yarn spinners based in Huddersfield.


"Greenwoods can supply you with all the Wools and other threads mentioned in this and other Vogue issues.  ... In addition, any of the garments can be supplied COMPLETELY HAND-KNITTED & READY TO WEAR at reasonable prices from 12/6 upwards. Ask for a quotation for your favourite garment made to measure."

It seems a bit odd to read a knitting magazine and then pay someone else to do the knitting for you, but the ad appeared for several years, so I assume that it was a successful service.

The Victoria Street business appeared in a 1937 Huddersfield trade directory as "Miss Greenwood, Wool and Handicraft Depot".  So it appears that at that time, the company was only supplying yarns made elsewhere - interesting that it was owned by a woman.  Towards the end of the war, Greenwoods started advertising their own yarns, and then from 1946 the Vogue Knitting ads featured their own designs as well. In 1946 (between the two issues of Vogue Knitting) the company changed its name to Wakefield, Greenwood, and moved to Railway Street.  I wonder what had happened?  Was Miss Greenwood still involved in the business?  Had she got married to Mr Wakefield?

Wakefield, Greenwood continued to advertise into the 1950s, and I hoped to find one of their patterns at Lee Mills. One eventually appeared a couple of weeks ago - from the early 1950s, I guess.  But it was still a bit mysterious.  They claim to manufacture the yarns they are selling, but there cannot possibly have been a spinning mill on Railway Street, or even a warehouse - there is nowhere to put one.  So either they were actually buying in yarn from other companies, or their mill was somewhere else - but then why wasn't their office at the mill?

Then this week, I found a whole box of W.G. patterns.  The styles appear to date from the 1950s and early 1960s.  By sorting them into numerical order, and looking at the ads in Vogue Knitting too, it's possible to follow the development of the company.  At some time in the late 1950s, the company was renamed W.G. Spinners Ltd, but remained at Railway Street. And then a little later, in the early 1960s, the address changed to "Wakefield Mills, Thornhill Beck Lane, Brighouse".
Brighouse isn't far away, but it's not Huddersfield.  I felt quite proud that Wakefield, Greenwood were a Huddersfield company, but it turns out that they decamped to Brighouse - or maybe the spinning was done in Brighouse all along.  A bit disappointing.  Still, Miss Greenwood's original business was definitely Huddersfield based - I like to think of all those posh Vogue Knitting readers who couldn't knit paying to have their knitting done in Huddersfield.
Posted by Barbara at 10:30 6 comments:


I was sorting through yet another box of papers at the Knitting and Crochet Guild store at Lee Mills last week, and finding mostly things we already have or don't want, but occasionally something new and interesting.  Near the bottom I came across some Patons and Baldwins patterns from the 1920s.  They were in poor condition, with the pages falling apart where they had been folded at some time, and pieces missing in some cases.  But they are mostly legible, and the illustrations are clear enough. Amongst them is a Fair Isle (or "Fair Island") pattern - and another that looks like Fair Isle but isn't.

I think the Fair Island jersey pattern dates from the very early 1920s, because Patons & Baldwins merged in 1920, but the pattern is evidently produced by Baldwins, and they were producing the  Beehive Knitting Booklet series before the merger. The cover photo is wonderful - she's off to play hockey on a cold winter's day (though you would think that the scarf might get in the way).  We also know what colours the outfit was knitted in, because amazingly there is a colour chart inside - red, peacock and navy, on a white background.
.

The other leaflet is slightly later, I think.  At first sight the cover pattern is also a Fair Isle type of pattern, but in fact the bands are embroidered in cross-stitch after the knitting is done. Again, there is a colour chart - the instructions say: "Each square represents a stitch.  A cross-stitch is worked over one square in width and two squares in depth."  The construction of the pull-over is quite simple.  It is knitted in one piece, starting at the bottom edge of the back, so that the only seams are at the sides.  It is mainly stocking stitch, but  the bands around the neck and armholes are knitted at the same time as the body, in garter stitch.  (I love that hat.)

There is another pattern in the same leaflet for a sleeveless cardigan, also embroidered, although this one is obviously not attempting to imitate Fair Isle.

Fair isle jumpers were very popular in the 1920s, so I suppose that the pull-over pattern was to cater for women who wanted to make one for themselves, but  were not expert knitters.  But then, once you get the idea of embroidering a design onto a knitted jumper, you can choose any kind of design you like. 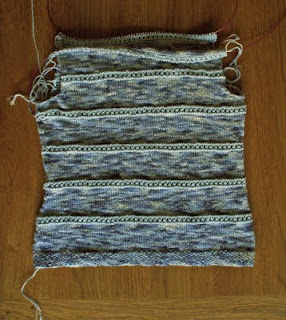 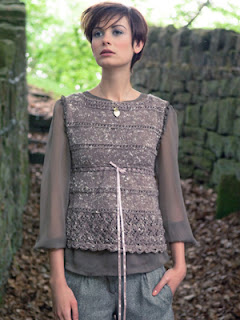 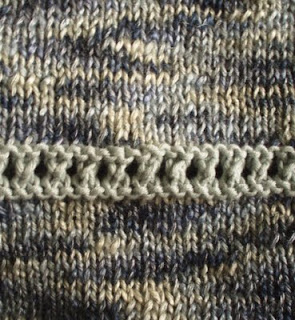 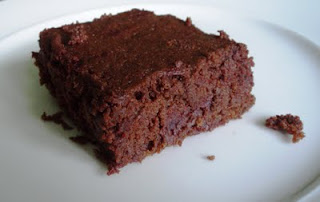 Back in March, I wrote about a visit to Todmorden, when we had coffee and cake at the whole-food cafe in the former Co-op, and I had a delicious beetroot and chocolate brownie.  (John said that the very idea was disgusting, which added a certain piquancy to the experience.)  Last week, we went to Northumberland to stay with friends at their caravan in Coquetdale, and I decided to look for a recipe so that I could take a batch with us.  You can find the recipe I used, by Hugh Fearnley-Whittingstall, at several web sites, including this one.

The brownies are easy to make, and very quick if you buy ready-cooked beetroot.  I stuck to the recipe, except that I put the beetroot through the food processor instead of attempting to grate it, which seemed potentially very messy. (I was extremely careful in handling the beetroot - the juice is very splashy and can easily get all over your clothes and the kitchen.)

The brownies were very good indeed, and even better after keeping for a day - rich and moist and deliciously chocolatey.  The beetroot adds texture and helps to keep them nicely squidgey, but there is no detectable taste of beetroot at all (which is probably just as well). So everyone at the caravan enjoyed them very much - except John, who could not be persuaded to taste even the tiniest piece.

It's a pity - I'm sure he would enjoy them if he would only try them.  I shall make them again, to share with friends - though not too often, as they are very calorific. Even if they do contain vegetables and so are good for you.
Posted by Barbara at 22:29 1 comment: