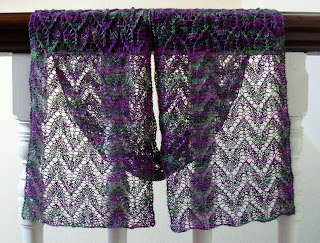 We went to a friend's birthday party yesterday, and I gave her the lacy scarf I have been knitting in Manos del Uruguay laceweight yarn.   The pattern is Mirabelle by Jennifer L. May, which is a free download from here.  It is designed for one skein of Manos Lace, which makes a good sized scarf.

I am really pleased with the result - it is amazingly light and delicate.  The yarn is a wonderfully soft mixture of mainly alpaca with some silk and cashmere, and this colourway (Titania, which is variegated purple and green) suits the pattern well. 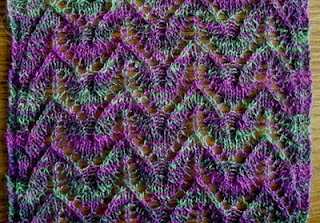 Being fairly new to knitting with such fine yarn, I am still surprised at how much difference blocking makes. Before blocking, the fabric is scrunched up and stretchy, and the lace pattern is not so evident. 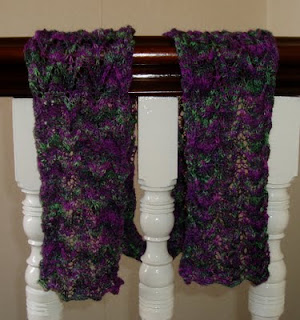 Blocking transforms the fabric completely.  It emphasises the spaces between the stitches, almost more than the stitches themselves.  The finished scarf seems to be made of air as much as yarn. 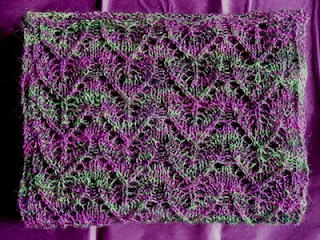 The long blogging silence is partly because we had a week's holiday in Galloway (south-west Scotland) over the May Day holiday weekend. We stayed at Barend holiday village - a quiet spot overlooking a small loch (with a pair of nesting swans) and only a few hundred yards from the sea. 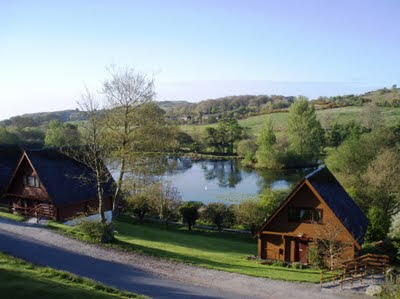 The fine weather in March and April continued for the whole week - blue skies, bright sunshine. We did see some rain on one day - we were walking along the coast, and it was very cloudy to the south, looking towards the hills of the Lake District. We could see that it was raining out on the Solway Firth, but the clouds passed us by.

We did quite a bit of walking. The countryside was surprisingly green, considering that it had been so dry for the past two months. One walk was from the tiny village of Durisdeer, following a Roman road up the valley towards the pass to the north, and past a Roman fortlet. We tend to forget (in England anyway) that the Romans did get beyond Hadrian's Wall, and that for a while the Empire stretched well into Scotland. The site of the fortlet can be clearly seen on the ground - it's a flat rectangular area surrounded by a bank and a ditch, on a spur overlooking the track that was the route of the Roman road.


On the day we were there, we had the valley to ourselves, apart from the sheep and the birds, and we could see right down the valley towards the sea. But it must have seemed beyond the edge of the world for the soldiers posted to the fortlet - especially in more typical damp and misty Scottish weather, when you wouldn't be able to see any distance at all. I think that back then the hills would have been thickly wooded, so it must have seemed very gloomy, claustrophobic and threatening - you might imagine a Pict hiding behind every tree.

We visited several churchyards and cemeteries and saw several war memorials during the week, J taking lots of photos. The war memorial at Maxwelltown (across the river from Dumfries) is very striking, with a figure of a soldier raising his arms, apparently in despair and horror. 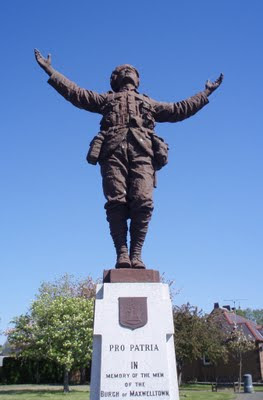 It's a long way from the "glorious sacrifice" kind of message of many WWI memorials.   And it's a great contrast to the Kirkcudbright memorial, not too far away, which likewise has a statue of a soldier.  You can see that he is heroic by his stern expression, and he is bravely defending a small child with a sword and shield - but with no clothes on. Hardly appropriate kit for trench warfare.

It was not quite a knitting-free week. I did some knitting in the evenings, and we found some knitted items in Dumfries museum, where there was a small display on Sanquhar knitting - gloves and socks. (Sanquhar is not far from Dumfries. It has its own museum, but I have not yet visited it.)


The gloves in the photo belonged to a local collector of antiquities.  He died in 1889, so that the gloves are well over one hundred years old. The Sanquhar patterns look attractive, but I don't have any desire to try them - I wouldn't have have the patience for something so fiddly.


Altogether, we had a really good week - beautiful countryside, wonderful weather, lots to see, good company.  The end of the week was not so good - I managed to injure myself by falling off a bench and bashing my ribs, so for several days after we got back I didn't do very much apart from a lot of knitting  (and so I have nearly finished the Martha cardigan).  But I'm getting better, though some movements (reaching up, lying down) are still a bit difficult, and sneezing and coughing are a very bad idea.
Posted by Barbara at 11:08 No comments: