The spinners J. & J. Baldwin & Partners of Halifax and John Paton, Son & Co. Ltd. of Alloa merged in 1920 to form Patons & Baldwins, probably the largest manufacturer of knitting wool in the country.  Before the merger, both companies had published knitting patterns:  Baldwin's Beehive Booklets and Paton's Helps to Knitters series.  In spite of the merger, the component companies continued to operate more or less independently for several years, with the two separate series of pattern leaflets.  But eventually, they were merged into a single Helps to Knitters series.

Some of the (very few) 1920s Helps to Knitters leaflets in the Knitting & Crochet Guild collection list the current leaflets on the back.  This is the beginning of one such list:

(Click on the image to enlarge it.)  The jump in numbering after 84P marks the start of the new series, which began with Helps to Knitters No.101.

(Geeky note: The earlier leaflets had been numbered from 1, but it seems that neither series had reached more than 90 leaflets by 1927, so 101 was a good starting point.  A few of the earlier leaflets remained in print for several more years, but were re-issued as Patons & Baldwins' Helps to Knitters, with their original number.  A 'P' was appended if the leaflets had originally been a Paton's Helps to Knitters leaflet; so for instance, there were two different leaflets numbered 69 (formerly a Beehive Booklet) and 69P (formerly a Paton's Helps to Knitters leaflet.))

But the most intriguing leaflet in the list is No. 101:  Hand-knitted spats, in various wools.  Whenever I have seen that entry, I have regretted that we don't have the leaflet.  In the 1920s,  men wore spats over shoes, to cover the ankles and top of the shoe, but they were quite formal, city wear - worn for instance by Bertie Wooster and his ilk in the P G Wodehouse stories, and were definitely not knitted.  So what were the Hand-knitted Spats like, and were they for men or women?
Then, a little while ago I was looking in the excellent Trove archive of Australian newspapers (for something else entirely, of course) when I found the pattern!  It appeared on the women's page of  The Examiner (Launceston, Tasmania) in April 1927, under the headline "Hand-Knitted Spattees".  I have transcribed the pattern below.

I think there's no doubt that this is copied from the Helps to Knitters leaflet 101, even though it calls them spattees and not spats.   It's clear from the instructions that the spattees start off like knee-length socks, with a turn over, but the foot part is not like a sock, and there's something complicated happening, involving short rows.  I did some digging, and found this 1927 ad showing a woman wearing a knitted 'sports coat', a knitted 'stocking cap' (a cap and muffler combined), and 'knitted woollen spattees in a jacqard design'.
I think that's what the spats/spattees in Helps to Knitters 101 would look like.  But I was intrigued by the last part of the instructions (labelled as 1st to 17th rows) which use short rows.  After knitting the part which eventually goes round the calf, with a turnover just below the knee, you split the stitches into two lots of 35,  and that's where the short rows come in.  I didn't want to knit a pair of spats, or even just one, but I wanted to find out what the short rows are doing, so I decided to start from the point where you start working on half the stitches.
The fabric is supposed to be a sort of broken rib, and you are supposed to "work in pattern" as you increase and decrease, but I thought that would be confusing (it would confuse me, anyway) so I used stocking stitch instead.  And to make the shaping given by the short rows clearer, I knitted in stripes of two colours, changing after every two rows. Here's the result: 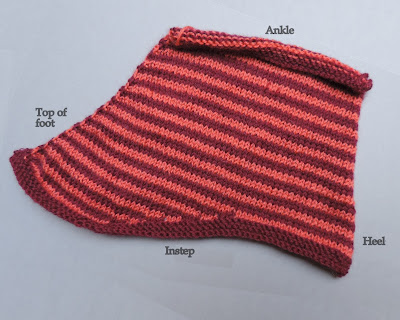 It's clear from this piece how the spat fits the foot, over a shoe.  The short rows shape the bottom edge of the spat,  The instructions are just to turn at the end of each short row, so there is a row of little holes just above the garter stitch edging - techniques like 'wrap and turn' which prevent the holes weren't in use then.  But in that position, the holes are not very noticeable. 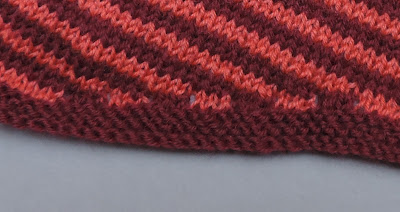 There seems to have been a brief fashion for wearing wool spattees for country wear, and I found a newspaper article which pinpointed their introduction, in The Scotsman in August 1926:

Despite the heat and the fact that August has drawn the majority of society folk from London to the moors or Continental holiday resorts, there was quite a number of people who responded to Lady Strathspey's invitation to her "At Home" at the Savoy Hotel on Wednesday. .....
Tea and many delectable dainties for a hot afternoon were particularly acceptable in that cool, shaded room, but Lady Strathspey had arranged a novel interlude for her "At Home" which took the form of a mannequin parade to display the new Highland "spattees" which are to be such a chic adjunct for the sportswoman's wear. They are intended to replace Russian boots, the ugliness of which made them unpopular with most women. The new "spattees" are of shower-proofed wool or tweed and shaped to fit the leg, spat fashion, extending to the knee, with a fancy turnover top. Naturally, the guests were immensely interested in the novelty, and one or two caused no small amusement by trying on the "spattees" then and there.

Another report of the same "At Home", in the Leeds Mercury, suggests that spattees were not just intended for country wear, but for wet weather in town, too.  The rising hemlines of skirts and dresses in the 1920s had revealed the silk stockings of ladies who had the money to buy such things, and also exposed the stockings to splashes of rain and mud - and the ankles to cold and wet.

New Ankle Wear.  Many people have complained of the free display of the modern ankle, but even more have complained of its encasement in the unbecoming Russian boot. A cure for both ills was introduced at a reception given by Lady Strathspey in the Savoy Hotel this afternoon.

This new fashion for protecting silken ankles in wet weather is called the Highland Spattee, and is made of showerproof wool, or wool and cotton, with a fancy top. Being made spat fashion it is easily slipped over the shoe and stockings, and it fits without the heavy creases which make the Russian boots so ungraceful.

I think that spattees for town wear may have been a very short-lived fashion - the despised Russian boots (knee-length leather boots, I think) would have been much more practical in wet weather.  Suppose you went out for afternoon tea wearing your spattees in the rain, and took them off while you had tea.  Imagine how horrible it would be to put the wet, muddy spattees back on to go home again. But for country wear the fashion might have lasted longer.  And if you wanted a pair of knitted spattees, making your own would have been easy and economical.  The pair shown in the Debenham & Freebody ad, for instance, cost 19 shillings and 6 pence - almost £1.  Taking inflation into account, that would now be worth more than £60.  If they were hand-knitted (it doesn't say), that might be justifiable, but making your own would be much, much cheaper.
It would still be good to have Helps to Knitters No. 101 as it was published in the U.K., if only to have an illustration, but failing that, the Trove pattern is nearly as good.  And it's fascinating to see that designers in the 1920s were quite able to use short rows to make complicated shapes like these spats.
P.S.  Since writing this post, I've done some more digging in Trove, and found an ad for Helps to Knitters 101M, from June 1927. 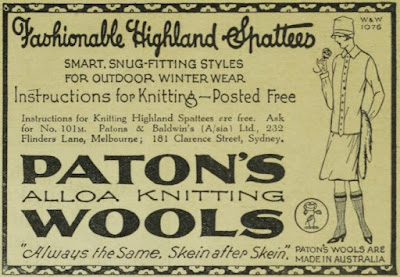 This confirms what the spattees looked like as part of a complete outfit (though it shows them with a coloured stripe on the turnover, which doesn't exist in the instructions given earlier in the post).  It also again gives the number as 101M, and not 101.  I now think that this was an Australian version of the  leaflet (M for Melbourne, perhaps, where P&B's Australian base was) and a separate printing might have been necessary to allow the leaflet to be free in Australia, whereas the British version cost 3d.
Posted by Barbara at 18:25 6 comments: