Volunteers at Lee Mills have been sorting the Knitting and Crochet Guild's collection of pattern leaflets for months now, first by spinner and then numerically.  There were dozens of boxes to sort - mostly they were completely mixed up at the beginning, and so we labelled them "Patterns Unsorted".   I showed a photo of some of them a couple of weeks ago here.  For a long time, it seemed that going through all the "Patterns Unsorted" boxes was such a huge task that we would never get to the end of it - there aren't many volunteers, we all have other things to do.

In the office is a wall of shelving, with boxes labelled for the different spinners,  and as we went through the unsorted patterns, we would put each one into its proper box. When a box was filled, it would be moved out onto another set of shelves. There are about 65 sorting boxes, from Argyll to Woolworths, via Bairns-Wear, Bestway, Copley, Emu, Robin, Sirdar, Wendy and many more.  Patons has several boxes all to itself,  and there is a "Small Spinners" box, because even 65 boxes is not enough to cover all possibilities.

And then last week, I finished the last few of the "Patterns Unsorted" boxes!  Woohoo!   This is a significant milestone on the way to getting the pattern leaflets completely sorted.  We still have to sort the boxes of each spinner's patterns into numerical order, but we have been doing some of that in parallel, and we are more than a third done already.

And so now the wall of boxes will no longer be needed.  We can re-use the space and make it look more like a pattern library than a mail sorting office.   I feel very pleased.
Posted by Barbara at 09:31 2 comments:

It's been a busy week and I'm behindhand with posting.  Apologies.

Last Saturday we went with some friends on an expedition to Barton-on-Humber.  It was a beautiful day, sunny, warm and dry - the first nice day for weeks. Barton is a little town at the southern end of the Humber Bridge, with an important Saxon church, now in the care of English Heritage. (The town also has a medieval church only a couple of hundred yards away - more churches than it can use these days, but at the time that the later church was built, Barton was an important port and presumably needed another to cope with the population.)    There is also a string of nature reserves along the Humber bank, on the edge of the town, with several ponds in the clay pits of the former brick works. We saw a lot of birds there - mostly ducks, but some more interesting birds too, including a grebe which was fishing very successfully.

The town itself is very pleasant to wander around.  There are many independent little shops, still - and there were evidently many more at one time.  A knitting connection:  one of the former shops was a yarn shop, with advertising stickers for Lister Lavenda wool in windows either side of the door. 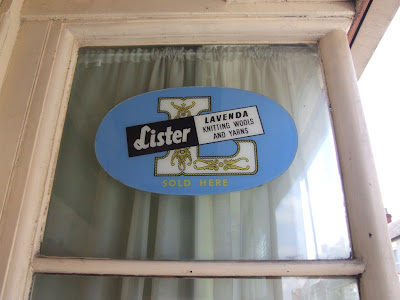 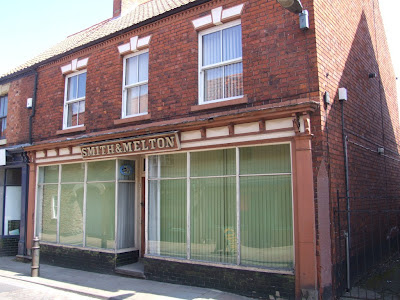 I think that the ad must date to the 1960s or earlier - although Lister & Co. were producing knitting yarn long after that, the Lavenda brand name was dropped around then.  (I'm glad to say that Bartonians still knit - there is a long-established yarn shop elsewhere in Barton, The Knitting Box.   It looked enticing, but I resisted the temptation.  I do not need more yarn.)
Posted by Barbara at 13:40 No comments:

A Wedding Dress and Buttons 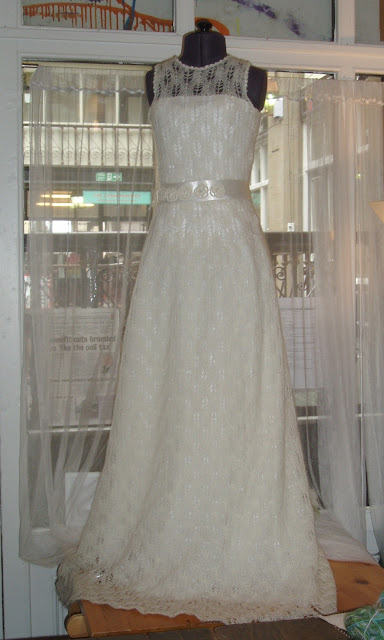 Lydia and Ash are now back from their honeymoon, so Lydia's knitted wedding dress, which I wrote about last month here,  is now on display in the window of her yarn shop in the Byram Arcade.  There was an article about it in the local paper, the Huddersfield Examiner, with a photo of her wearing it.  I went to the usual Thursday Knit and Natter at the shop this morning and took photos of the dress.

I wrote in March that I bought some Fimo jewellery from my friend Steph.  She is developing the techniques that she uses all the time, and now produces some wonderfully intricate results.  She brought a new batch of jewellery and buttons to the shop this morning.  A lot of really pretty brooches and earrings, and the buttons were irresistible.

The photo shows just a few of the buttons.  I felt that I should immediately plan lots of knitting - a cardigan with a single large important button, for instance.  It was a hard choice, but in the end I picked the card of two rectangular buttons in the photo.   I might make a collar/cowl/neckwarmer thing - something with two buttons to fasten it.    I'll look for some thick yarn that picks up the colours in the buttons. 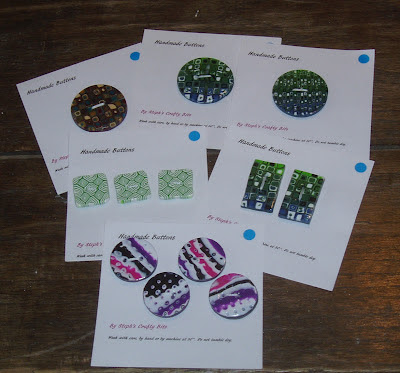 If you should be in Huddersfield, do go and see Lydia's wedding dress.  And you will find a selection of Steph's Crafty Bits in the shop.
Posted by Barbara at 22:55 1 comment:

I have done more sorting of Templeton's patterns  at Lee Mills, from the 1950s and 1960s.  One thing that you notice, when you're sorting leaflets that started off all mixed up with patterns from other spinners, is that some patterns turn up over and over again, while others we only have one copy of.  I assume that the ones that we have most of were ones that sold a lot of copies in the first place.    And in this case, the winner is.... a pattern for a women's jacket with a collar, issued in 1960. 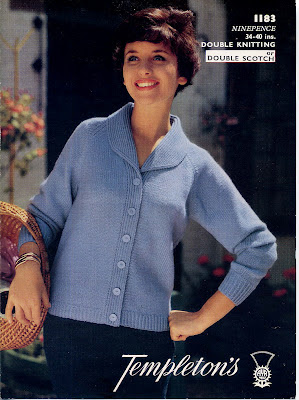 I think that cardigans/jackets with collars were popular at the time, and this one is nicely designed - there is some neat detail in the shaping of the collar.  It looks attractive.  But one thing I notice about the leaflet  that has nothing to do with the jacket:  the model is carrying a gondola basket.  I had completely forgotten them.  They were very popular for several years, I think.  A few of the Templeton's patterns produced around the same time also feature a gondola basket.  It's quite possibly the same basket in all the photographs - leaflet 1160 shows it in glorious detail.  And the model in leaflet 1160 is wearing a stretchy hairband, by the look if it - my sister used to wear one, around that time (she was only 9 or 10 at the time, though, so she didn't quite get the model look). 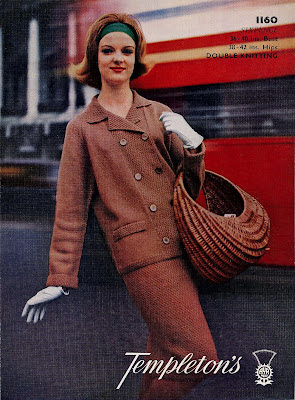 My mother never had a gondola basket - I'm sure she would have found it completely impractical.  It's only suitable for carrying, elegantly or otherwise, over your arm; if it rains (as it does) everything inside gets wet; and it's totally insecure - if you had your purse in it, it could easily be stolen.

But it's very useful if you are doing cookery lessons - the wide base means that you can carry home whatever you have made and keep it flat.  I remember that a lot of girls at my school who did cookery had gondola baskets, later in the 60s.  (I was never taught to cook - at my school you only did cookery if you weren't good enough at languages to do Latin or German.  I don't know what the reasoning was - maybe they thought that with a knowledge of Latin you could learn to cook from cookbooks.  It worked for me, though I don't think that the Latin had anything to do with it.)
Posted by Barbara at 11:57 1 comment:

On Saturday, three of us who work at Lee Mills went to the Annual General Meeting of the Knitting and Crochet Guild in Birmingham. There was a "Show and Tell" session in the morning - some of the members brought things they had made.  All unusual and interesting - covering hand and machine knitting and crochet.   I talked about the shrug I made last month, and showed the original pattern leaflet that inspired it - appropriate, since the pattern is in the Guild's collection, and I took along a small selection of other patterns from the collection.

At the AGM, I gave a presentation on the collections (the publications and the knitted and crocheted items) on behalf of the collections manager, who couldn't be there.   To prepare for the presentation,  last week I counted all the boxes of pattern leaflets at Lee Mills.  It was a very cheering exercise.  We have been sorting pattern leaflets for months now, and for a long time it seemed that we were making very little impression on the huge number of "Patterns Unsorted" boxes.   But, all of a sudden, we have nearly finished!  There were only 15 boxes left on Saturday (and I have done 3 more since then).  And of the boxes that have been sorted by spinner, there are 92 boxes of leaflets that have been put in numerical order, leaving a further 138 boxes still to do.    I was amazed - I had no idea that we had done so much.  (And since I did a lot of the work myself, I feel pretty good about it.)

As you might realize from the numbers, we do have a lot of pattern leaflets.   One estimate was 150,000, but that includes duplicates.  Excluding those, there must be tens of thousands of different patterns.  A lot.  One day, I will count them.  An amazing collection - now that it's becoming a collection and not just a mass of paper.