Quite a while ago, I saw Norah Gaughan's Here and There Cables design on Ravelry.  It's a lovely textured scarf, covered on both sides with cables which wander about, split and rejoin.  It's reversible, so the cables do the same thing on both sides, and I've been trying to figure out, with absolutely no success, how they are done.  But following the reversible cables workshop last week, I had another look.  Still couldn't work it out.  So I decided I needed to get the pattern - I really wanted to understand it, and I wasn't going to do it any other way. 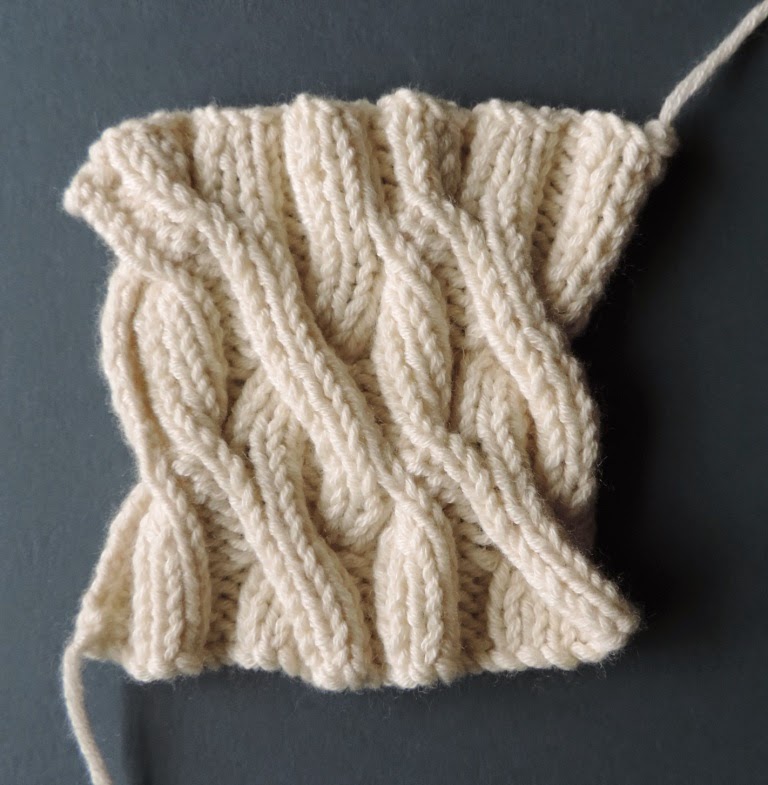 And the stitch pattern is the same on the other side!

Now that I have seen the instructions, it's actually a very easy pattern to remember, and quite easy to knit.   I feel there's going to be a cabled scarf on my needles very soon....

One downside of finally understanding how the Here and There Cables work is that  trying to work it out in my head was an infallible way of getting back to sleep, if I woke up in the middle of the night.  Perhaps I'll have to try designing some variations instead.
Posted by Barbara at 11:13 No comments:

Friends came to stay last weekend and brought me a knitting-related gift - a Patons Turkey Rug Wool Gauge.   It's a piece of wood, 8½ inches (21.5 cm) long.

The instructions are printed on it: "Wrap wool with even tension round gauge and cut along groove"- the groove is on the under side.

The gauge was intended to be used when cutting thick rug wool into short pieces for making a hooked rug - the pieces are 2¾ inches long, or just over 7 cm.  (I've tried it.)  Rug making was evidently popular in the 1930s - there is a Patons & Baldwins catalogue from 1935 in the Knitting & Crochet Guild collection that has several pages on making rugs.

The woman seems to be working with large skeins of wool, so she must be cutting off short lengths of wool before hooking them into the canvas.  Presumably she is using a wool gauge, though it's not shown in the sketch.

The KCG collection also has several booklets of rug designs, from the Patons archive.  The earliest, I think, is a Rugcraft booklet. There seem to have been several editions of Rugcraft; this one is later than the one illustrated in the 1935 catalogue, but still shows vaguely Art Deco designs, so possibly dates from the late 1940s. 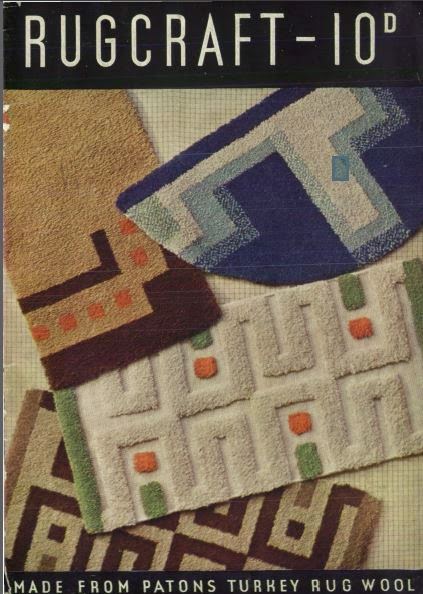 My mother used to make rugs, up to the 1970s.  (My mother-in-law too.)  But I don't remember my mother having a rug wool gauge -  she bought Readicut kits, with a printed canvas, and bundles of  wool already cut to the right length.  So no need for a gauge. 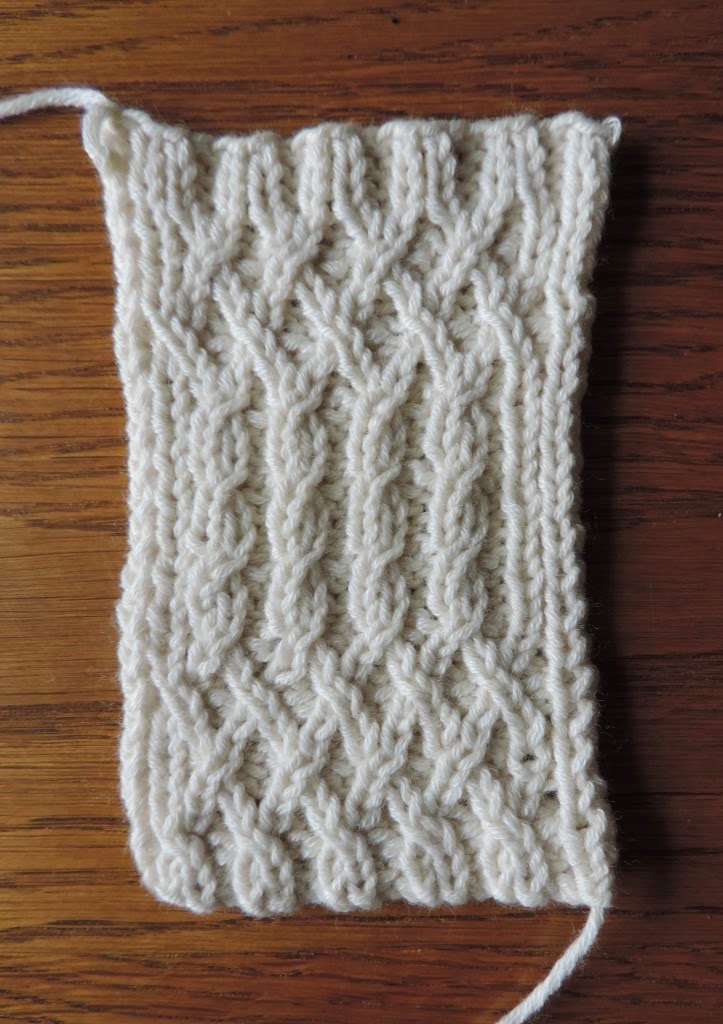 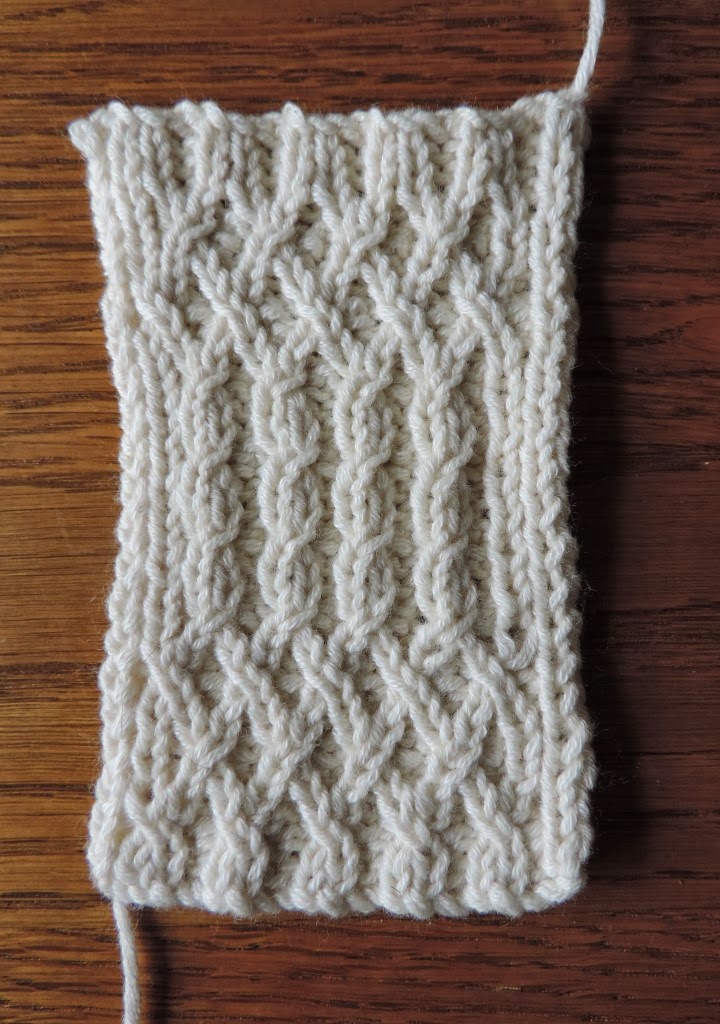 I changed the design of this blog a month or so ago, in preparation for launching my First World War blog, and at the time I warned readers that I would change the title shortly.  Now I've done it.   I got bored with the old title - I've been writing this blog for more than four years and I wanted a change.

(More than four years - isn't that amazing?  I'm amazed, anyway.  I didn't start writing with any kind of time limit in mind, but I don't think that I expected that I would still have things to write about after so long.  But then I got involved with the Knitting & Crochet Guild and started sorting out all the publications and got interested in the history of knitting and crochet....  And here we are.)

And apart from the change of title, it's business as usual.
Posted by Barbara at 12:54 3 comments: 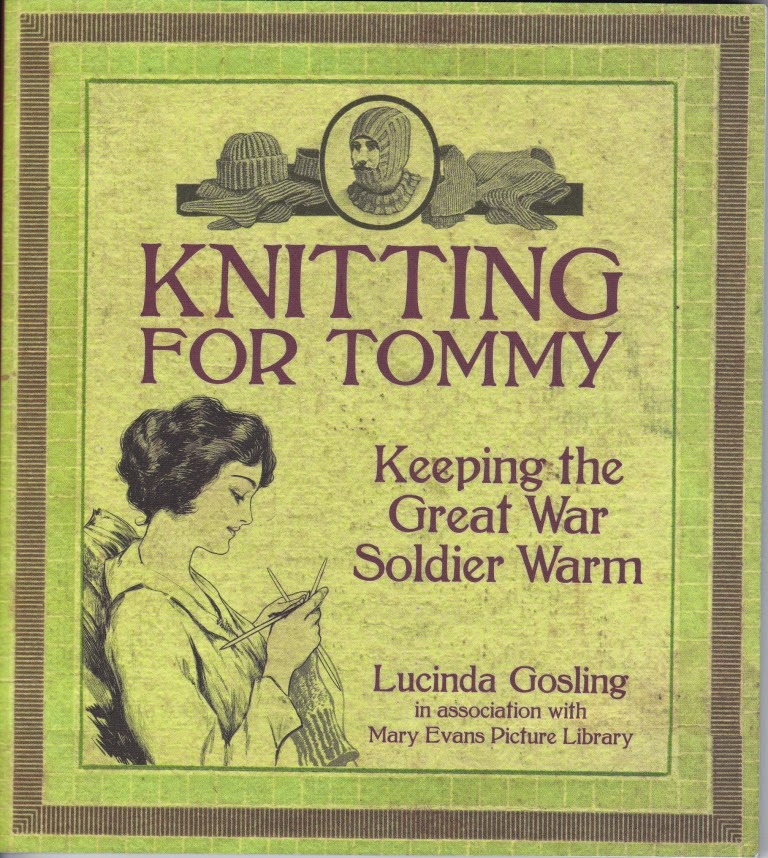 Apologies for the long gap since the last post - been busy.

One of the things I have been doing is reading a new book on knitting in the First World War - Knitting for Tommy by Lucinda Gosling.  I  have been waiting for it for several months, because  I supplied some of the images, from the Knitting & Crochet Guild collection, and also saw a draft version of the text.  And a couple of weeks ago, Luci sent me a copy of the finished book (which was actually published on 4th August, for the centenary).  It's lovely to see it all come together, with lots of other images from the Mary Evans Picture Library.  And here and there I recognise the ones from the collection - a couple of ads for spinners, promoting their khaki yarn, and several pages from Woman's Own magazine with knitting patterns for comforts for the troops.

Luci has done a lot of research in publications of the time - there are no other books on First World War knitting that I know of, so hers had to be based on original sources.  The Mary Evans Picture Library has runs of several magazines of the period, including The Queen, Punch, The Tatler, that she has been able to use.   The Queen had a needlecraft column and during the First World War, it published several patterns for knitted comforts designed by Henrietta Warleigh - as Luci points out, an unusual instance at that time of a named designer.

The Library also has a collection of First World War postcards, including several with knitting subjects -- usually sketches or cartoons, sometimes featuring winsome little girls. Some of these illustrate Luci's chapter on Knitting Fun, along with cartoons from Punch.

The book reproduces several knitting patterns that are readable, although perhaps not as easy to follow as we would expect these days.  So it would be possible, with a bit of interpretation and perhaps some experimentation in adapting them to modern yarns, to knit a wide variety of comforts from this book.  There are socks, body belts, waistcoats, mufflers, and cardigans.  There are several caps and helmets, and an amazing variety of gloves and mittens, with and without fingers, including the rifle glove that has an open thumb and first finger, and a mitten part to cover the other fingers. And as well as garments intended for serving soldiers, there are specialised garments for the wounded, to cater for a range of injuries.

For anyone who is interested in the topic, this is an indispensable book.