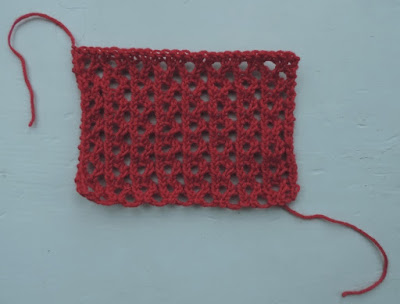 The casts were taken off my wrists on Monday, hurray.  So now I can use my hands again and not just my fingers.  The wrists are very stiff and achy, but there's already some improvement since Monday.  I still have a brace on my knee - this one allows for some bending.  It's currently set to a maximum of 30°, and that will be increased in stages.  (That's the summary - non-knitters can stop reading now.)

The next question is: can I knit?  I already have a knitting project on the needles since before my accident, but I didn't want to go straight back to that.  I didn't know how easily I would be able to knit, and my tension might be different at first.  And you don't want a change of tension in the middle of a piece of knitting.   So instead, today I knitted a swatch.  It's a lacy scarf pattern, Different Breeze - a free pattern on Ravelry designed by Sachiko Uemura, and a candidate for the Juniper Moon yarn I saw in Ribbon Circus.

And while knitting the swatch, I didn't feel that my knitting style was any different at all - so I think I can go back to my work-in-progress and carry on.
Posted by Barbara at 21:05 11 comments: 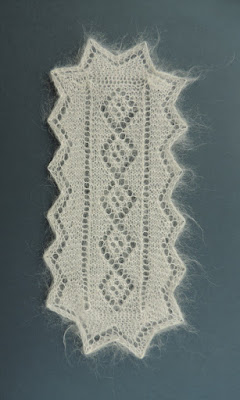 Yesterday evening, we had the monthly meeting of the Huddersfield Knitting & Crochet Guild, and I managed to get to it (with some help).  The theme of the meetings this year is 'Around the world in knitting and crochet', and yesterday we were in Russia.  Marie had done a lot of research (and a lot of work) on Orenburg lace shawls, and gave us a fascinating talk on its history.  She had bought a hank of Volgograd goat down yarn to show to us, and had acquired a sample of the original goat down - you can feel how warm and light it is just by letting it sit on the palm of your hand for a little while.  (Or so I'm told - the palms of my hands are still covered by the casts on my wrists, and it doesn't work quite as well on fingers.)  To make the yarn stronger, it's plied with another fibre - silk for the finest shawls.

Marie talked about the construction method used for the shawls: you knit the bottom border first, in a long strip;  then turn the corner, and pick up stitches along the straight edge of the border; then knit the centre of the shawl and the left and right borders all together, side to side; then turn the corner at top right and knit the top border, taking in the stitches from the top edge of the centre part as you go.  then finally at the top left corner, you join the top border and left border by grafting.  Not the grafting that you use on sock toes (aka Kitchener stitch), but Russian grafting.  Which was amazing to me, because I wrote about Russian grafting on this blog way back in 2010.  I had never heard of Orenburg lace back then, and it never occurred to me to wonder what Russian knitters might use Russian grafting for - I just thought it was a really neat way of joining shoulder seams (which it is).   But it is also (and I suppose originally) used for finishing Orenburg lace shawls.

Marie talked about the traditional motifs used in Orenburg lace, and had knitted a lot of samples to show them. The samples are constructed in the same way as a full-size shawl, with a border. Most of them were knitted in Rowan Kid Silk Haze, including the rectangular one at top, and this one with the lovely chain of hearts motif.


And to emulate the finest Orenburg shawls, Marie had knitted a sample in an incredibly fine yarn -  Heirloom Knitting's Ethereal CashSilk (70% cashmere, 30% silk).  There are 1500m. of yarn in a 25g ball,  amazingly - it's finer than sewing thread, and I don't know how it's possible to knit with it. But evidently some people can, including Marie.  (Ethereal is an apt name, I think - "Extremely delicate and light in a way that seems not to be of this world".)

It was a great evening - I'm so glad I managed to get to it.  Thanks very much to Marie for a fascinating talk, and for all the work she had done beforehand. 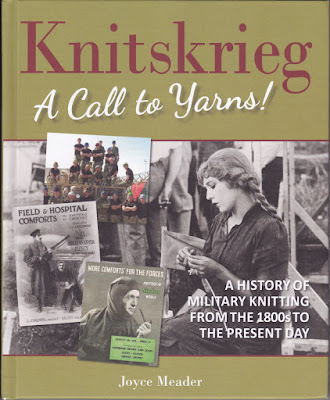 I have been reading a new book, Knitskrieg! A call to yarns by Joyce Meader - subtitled "A history of military knitting from the 1800s to the present day" (published by Uniform Press - full details here).   I have met Joyce several times over the past  few years, most recently in Glasgow last year, at the Knitting in Wartime study day, when she gave a fascinating talk, covering a lot of the same ground as the book.  The book is lavishly illustrated - many of the illustrations are from Joyce's collection, and there are also photos of replica garments made by Joyce and modelled by her friends.

Joyce starts with the Napoleonic Wars, represented by a knitted forage cap of the 33rd Regiment of Foot.  The original is in the Bankfield Museum in Halifax - a rare survival, if not unique.


(A digression: I went to a talk and demonstration recently by John Spencer in the 33rd Foot re-enactment group. He said that the group had had a set of replica forage caps made - you can see them in one of the photos on their website.)

The forage cap was part of the official uniform; in later wars, the emphasis of the book switches to unofficial knitting, of  'comforts'.  The Crimean War of 1853 to 1856 was the first war that Britain was involved in that was reported almost as it happened, and was notoriously badly managed.  For the first time, the British public were concerned at the plight of the men fighting on their behalf, and the terrible conditions in the Crimea, especially during the winters.   Joyce writes about the book of knitting and crochet patterns, Comforts for the Crimea, published in 1854  by Mlle Riego de la Branchardiere, a prolific author of books on needlecrafts, and describes aristocratic ladies frantically knitting comforts to be sent out to the troops in the Crimea.

Later chapters cover knitting comforts in the American Civil War, the South African War of 1899 to 1902, and the First and Second World Wars.  One or two original patterns are given in each case, in the original words, which are sometimes more or less incomprehensible, though Joyce also gives 'translated' versions of a few patterns at the end of the book.  I was delighted to see a photo of a gentleman with a suitably military moustache wearing the striped sleeping helmet that Joyce showed in Glasgow.  (If you feel inclined to knit a striped balaclava, there is an updated pattern using modern yarn and needles in the book.)

The Second World War chapter shows pattern leaflets produced by the spinning companies (American and Australian as well as British) for a wide range of Service woollies.  There are also more unusual illustrations, such as a combined 'Knitting and Recipe Leaflet' from Batchelor's Peas, with the message "Save Time by using Batchelor's canned ready-cooked foods - spend it in knitting for yourself and the Services!"   And some ephemera which must be very rare - a chit from the Board of Trade allowing a representative of a comforts group to buy wool in Service colours off ration,  and little brown paper packets used by spinners to send out samples of Service wools.

(Another digression: I remember Batchelor's Peas from when I was a child - they were usually marrowfat peas, aka processed peas, which were dried and then soaked and cooked before being canned. They were a lurid, unnatural bright green.  Canned garden peas, which were fresh before they were canned, were a bit of a luxury.  You can still buy both - as well as Batchelor's canned mushy peas.)

There is a chapter on later 20th century wars that Britain was involved in:  Korea, Rhodesia and the Falklands. This includes a section on the virtues of 'string' vests, and another on the Guernseys issued to British soldiers in the Falklands.  The book comes right up to date covering Iraq and Afghanistan, and knitting by soldiers, as well as for soldiers.  Joyce also mentions knitting used to protest against war, and her pattern for knitted Remembrance Day poppies is illustrated with white peace poppies as well as red.


Joyce has an enviable collection of military knitting patterns, equipment and ephemera, as well as all the replicas she has knitted, and has put them to good use in this book.
Posted by Barbara at 13:27 7 comments: 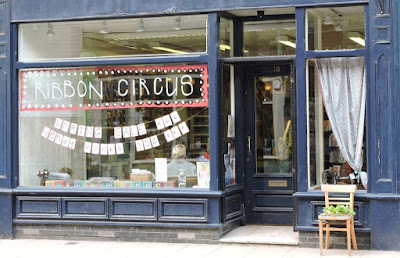 Back in February, I went to a fund-raising sale for Ribbon Circus in Hebden Bridge, one of the many businesses and houses in the Calder Valley that was flooded last December.   The shop re-opened in March, and I intended to visit shortly afteerwards, but it snowed on the day I was planning to go, so I didn't.  But finally, last Saturday, I got there.

It was a beautiful, sunny, warm spring day and Hebden Bridge was busy - it was great to see so many visitors returning.

And there were some very tempting yarns in Ribbon Circus.  I didn't buy any - it would be too frustrating to have new yarn when I can't knit.  (Due to two broken wrists, if you missed the earlier post.)   But I will.  The Juniper Moon 75% alpaca, 25% nylon was especially enticing - I'll be going back for some of that.  (It's sock yarn, but would be wasted on socks if you ask me - I'm not much of a sock knitter.)


Two more weeks until the casts come off my wrists, and the splint on my left leg gets changed for something that allows some bending of the knee.  Can't wait. 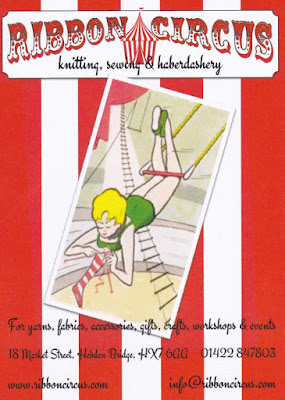