I started knitting the Wetwang jumper a couple of weeks ago, from Ann Kingstone's book, Born & Bred.   Wetwang is a Yorkshire village with black swans on the pond and a pub called the Black Swan. (And is well-known to archaeologists as the site of an Iron Age chariot burial.)  Ann's design is based on the black swans;  it has a yoke in stranded knitting with pairs of swans around it, and her sample jumper has the swans in black.   But I am knitting mine in navy blue (actually a darker blue than in the photo). 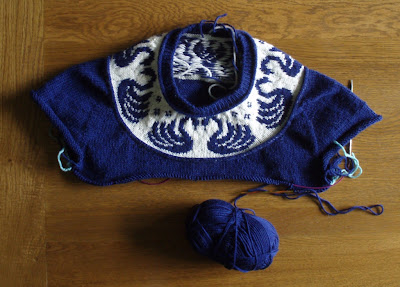 It's very clever design, but easy to follow.  It's knitted top down, and is completely seamless (hurray!).  So far I have knitted the yoke and the sleeve caps, and I am knitting the main part of the body, which is plain stocking stitch.  You can see that the ends of yarn around the yoke still need tidying up.  The bits of turquoise yarn under the sleeves are from the provisional cast on of the underarm stitches. 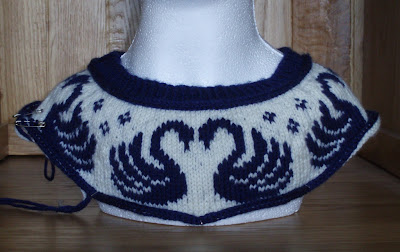 I love the swans around the yoke; they are so elegant. The yoke is bordered, top and bottom, by applied i-cord.  I have not done that before but I'm really impressed by it.  It gives a very neat edge.  Then there's a section of short rows, so that the back of the yoke sits higher than the front, and at the same time you increase for the sleeve caps.

I've been watching a lot of Broadchurch over the last couple of days - I have recorded every episode but never got around to watching any, until I realised that the last episode is tomorrow.  I am trying to catch up by then so that I can watch it live.   So now that I am on the plain stocking stitch part of Wetwang, I can knit it and watch Broadchurch at the same time, without missing anything.  And then try it on - one advantage of knitting top-down in one piece is that you can keep trying on as you go.  It fits very well - it's going to be really good.  Of course, now that Spring has finally arrived, I shan't be able to wear it until the end of the year, but never mind.

We were sorting more Patons patterns from the 1960s and 1970s this week, at Lee Mills, including patterns for a thick yarn called Totem.   Someone pointed these out, as a post-war innovation.  But although we think of thick yarn as new in the 1950s, it was only 'new' compared to what was available during the war.  Patons & Baldwins had had a Totem yarn in the 1930s, that was at least as thick as the 1950s version.  Here are two of the 1930s Totem patterns to prove it.

The Lady's Jumper pattern is knitted to a tension of 4.5 stitches to the inch (approx. 18 st. to 10 cm.) over stocking stitch with size 4 needles (6mm.).  I imagine, from the cover photo, that that is a reasonable tension for the yarn - not too loose, not too tight.  So that would make Totem somewhere around an Aran or Chunky yarn.

The House Coatee is knitted to a much looser tension - 3 st. to the inch on size E needles (whatever they are).  I'm not sure how well the House Coatee would wear, in practice.  It's knitted loosely but is intended to be close fitting - I think it would pull against the single button and stretch out of shape.  In fact, it already seems to be doing that a little bit in the photo.   Maybe if you were very slim, and didn't move and didn't breathe, that could work.

What to wear on a desert island

I have been sorting more patterns from the Knitting & Crochet Guild collection.  The latest batch are Patons patterns from the late 1970s and early 1980s.  Not an especially exciting batch, to be honest, but I found this bright and cheerful picture sweater from 1981 - evidently meant to be a summer sweater, in spite of being knit in D.K. wool.


I think that Kirsty Young ought to wear a sweater like this for Desert Island Discs, to get her guest in the right mood. (Though as it's a radio programme, we can't see what she's wearing - maybe she already does.)

I also found a companion sweater for the winter. Not as bright, and I think less popular, judging by the fact that I only found one copy of the pattern, whereas there were several of the desert island pattern.  I don't know why they weren't equally popular - I think that if you wanted a wintry picture sweater in 1981, this one is not bad.  And it doesn't have any snowmen, reindeer or other Christmassy elements, so you could have worn it all winter.  Not now, though - I know that there are some picture sweaters around this year, but I don't think that sweaters with a landscape all over the front have been revived.  They still belong in the 1980s.

I wrote a month ago about visiting Knit Purl in downtown Portland, where I bought Heidi Kirrmaier's Boardwalk pattern, and the Brooklyn Tweed Loft to knit it with.  I finished it last week - it was a quick knit and a really nice pattern to work with. 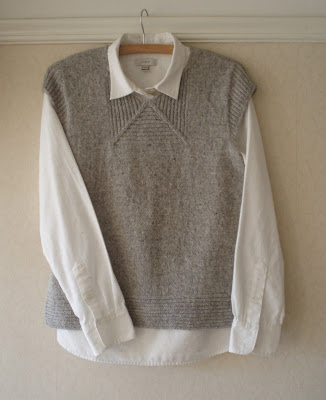 It's very well thought out.  I love the way that the cap sleeves curve over at the top, rather than sticking out - very simply done but it works.  And the bottom band with side slits is also simple but effective. To do the neckline, you leave a square opening in the front, and then pick up stitches around three sides, decreasing along the diagonals as you fill it in.  I usually don't like picking up stitches, but this was really straightforward.  You pick up two stitches for every three rows - easy. 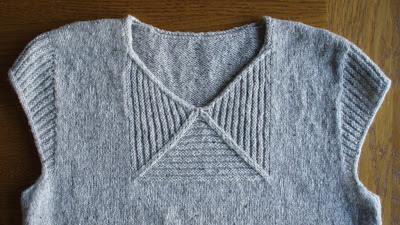 I modified it slightly: I made it a little bit longer than the pattern specifies, and I knit the front and back separately rather than in the round.  That's because that way I can knit without looking very often, if it's a simple stitch pattern, so I could read at the same time.  (One day, I'll be able to knit in the round as easily - I'm practising.)

I also bought the shirt in Portland, at J. Crew.  I had read that J. Crew are opening a store in this country later this year, so I wanted to see what sort of things they sell, and bought this really nice white shirt.  I am always on a quest for a nice white shirt - they are surprisingly hard to find.  Plain white shirts are not as common in the shops as you'd think, anyway, and I have strict criteria as to the quality of the fabric.  It has to be pure cotton, soft, but thick enough to be opaque.  I don't ask for much, but usually I have to settle for something that is only OK.   But this fabric is really nice, and has tiny flecks of bright colours in it, to make it more interesting.  The design of the shirt has to be good too, of course, and this one is just right.

I haven't yet been able to wear my new outfit - it's been much too cold.  There is still some snow on the ground, from a heavy snowfall we had a couple of weeks ago  - it has been bitterly cold.  We are past the Spring equinox, we've put the clocks forward, it's April - what we need is some Spring weather, asap.    But I think it's a bit warmer today, so maybe Spring is just around the corner.
Posted by Barbara at 17:30 2 comments:

We were sorting some 1960s and 1970s Patons pattern leaflets at Lee Mills recently and found a pattern for Blue Peter sweaters from 1969 - i.e. children's sweaters with the Blue Peter galleon on the front.  (In case you don't know, Blue Peter is a very long-running BBC children's programme.)


A fellow volunteer at Lee Mills borrowed the pattern to show to her grandsons, and they were very keen to have Blue Peter sweaters of their own  - the galleon emblem is still used for the programme, more than 40 years on.  She used the pattern to machine knit sweaters for both of them  - you can see a photo on her blog here.

It's not the usual vintage knit that you might find in books like Susan Crawford's  A Stitch in Time, but it's great that 1960s patterns can still appeal to people today.
Posted by Barbara at 22:03 2 comments: