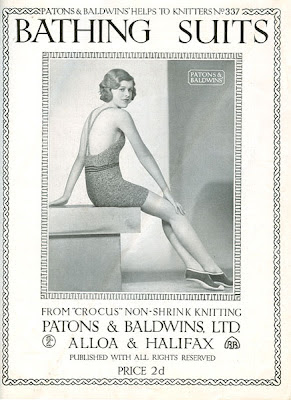 I am researching a short article on 1930s knitted woolly swimsuits for Slipknot, the magazine of the Knitting & Crochet Guild, based on the publications in the Guild's collections at Lee Mills.  Although some of the 1930s magazines have useful material (patterns or ads), we don't actually have many pattern leaflets for knitted swimsuits.  So I bought a copy of one from the Vintage Knitting Lady.

The leaflet includes patterns for two bathing suits in Patons & Baldwins "Crocus" non-shrink knitting wool.  All the patterns I have seen for hand-knitted wool swimsuits of that era stress that the yarn is non-shrink.  The implication is that other yarn would shrink in sea-water, but I don't know if these yarns represented a technical innovation, and if so what it was.

This leaflet was advertised in a magazine in May 1933, and as you can imagine, the ad is lyrical about the joys of swimsuits knitted in this yarn:
'"Crocus" bathing suits flourish gaily at fashionable seaside resorts. Smart designs - unfading colours - easy to knit - inexpensive.'
'"Crocus" Wool is unequalled for Bathing Suits.  It does not shrink, and neither sun nor salt water can fade it, also, being pure wool, it is deliciously cosy.  Marl colourings are very much in favour for this season's beach wear, and the models illustrated combine marl and plain shades in an attractive fashion.'


However, the fly in the ointment, the skeleton in the cupboard, is revealed in the instructions in the pattern leaflet. At the very beginning, in bold, is the message:
"As Woollen Fabric expands a little when wet, a Swimming Suit must fit the figure firmly before it is worn in the water, otherwise it will be liable to sag. The sizes given in the recipe are, therefore, not those of the finished garments, but such as will stretch in wear to the required dimensions."
I think this means: unless your bathing suit starts off too small for you, it will sag horribly, and will not cover you decently by the time you leave the water.

(Thanks to The Vintage Knitting Lady for permission to reproduce the photos from the pattern leaflet.)
Posted by Barbara at 17:22 No comments:

"And now an urgent SOS message"

Two weeks ago, BBC Radio 4 broadcast a fascinating programme on SOS messages, presented by Eddie Mair.  When I was a child, SOS messages were a regular feature of news programmes.  They were usually something like: "And now here is an SOS message for Joseph Peter Bloggs.  Will Joseph Peter Bloggs, believed to be working in the Stockport area, go at once to Ambridge General Hospital, where his mother, Mrs Ethel Mary Bloggs, is dangerously ill."  In an era when mobile phones had not been dreamt of and many households didn't have access to a phone, such messages were often the only way to get a message quickly to absent members of the family.

The programme reminded me of an ad for Sylvan soap flakes that I saw in a knitting magazine from 1946.  At that time, even though the war was over, most things were still rationed and in short supply - clothes rationing for instance went on until 1949.

The ad is completely incomprehensible, if you don't know about SOS messages.  It also helps if your mother always told you to make sure that your underwear was in a respectable state, in case you got knocked down by a car and taken to hospital in an ambulance, and people would see.

Since the radio is announcing "Here is a police message", I think this is a variant of the SOS message, put out following a road accident to appeal for witnesses.

In case you can't read the dialogue easily, Girl A says "Turn it off!" and Girl B says "But darling, it might be someone we know." (The two young women are evidently expecting that the names of people injured in the accident will be given out.)

A: "I don't care.  I always think it might have been me and I start worrying about my undies."
B: "But you used to have such dainty ones."
A: "I still have. But I simply daren't wear them.  However could I get them washed?"

And Girl B goes on to advise her to use Sylvan Flakes, and tells her how to get them.

But the obvious question is, if she wasn't wearing her "dainty undies", what was she wearing?
Posted by Barbara at 16:03 No comments:

Last week, I was in Winchester for the In the Loop 3 conference - The Voices of Knitting.  John came with me (to Winchester, not to the conference) so we had a week's holiday there.  While I was at the conference, John went to various military sites along that part of the south coast, such as the Napoleonic War forts on the hills around Portsmouth.  And while I wasn't at the conference, we went to places that would interest both of us - the old town of Southampton, Buckler's Hard, East Meon,..... And of course Winchester itself.

In the Loop was my first knitting conference.   It was fascinating - the talks covered a huge range of topics, all related to hand-knitting.  You can find the programme here.  Amongst many other things, there were papers on knitting and the Olympics (of course),  knitting therapy groups in the NHS, Shetland knitting (three different talks on that),  1930s knitted swimsuits,  the Faroese jumpers in The Killing, yarn bombing, the knitwear worn by early polar explorers,....    Several things I wanted to emulate - in one of the talks on Shetland knitting, there was a photo of a Shetland garden fence that someone had knitted, in the traditional Print o' the Wave lace pattern, but in garden twine using sharpened curtain poles.  I immediately started trying to think of somewhere in my garden to put up a similar fence.  Tom Van Deijnen (aka "tomofholland") showed a Curiosity Cabinet of knitting samples that he has made to demonstrate techniques, such as different methods to cast on or increase - you'll find a photo of part of it here.  And someone showed Schiaparelli's trompe l'oeil jumper with a white collar and floppy bow at the neck and white cuffs - whenever I see that, I think that I should knit it one day.

I took some knitting with me, of course, and finished my lace ribbon scarf during the second day of the conference.  The lighting was dimmed during the talks, but it is a simple enough pattern to do in poor light - I haven't made any permanent mistakes that I can see, at least.  I wore the finished scarf on the third day of the conference, straight off the needles, though it looks better now that it is blocked.  After that, I started the cuff of the second of the pair of gloves that I am making - the fingers of the first are not yet finished, but I needed something simpler to do than knitting fingers in the dark.