We are in the process of scanning the covers of the patterns in the Knitting & Crochet Guild collection, focusing for now on the earliest leaflets, from before 1950. Many of them are very attractive, and here's a batch of patterns from the 1940s that I particularly noticed. They are unusual, because instead of relying on the cover illustration to sell the design, there is a bit of description inside telling knitters why this was up-to-the-minute and fitted in with the fashions of the day. I find that helpful, because it's hard to judge the designs otherwise except by modern standards.

The designs are all knitted in 3-ply wool, to a tension of around 32 stitches and 42 rows to 10 cm. in stocking stitch. That's typical of 1940s clothes rationing, when a little knitting wool had to go a long way.

The first design is a neat blouse with bands of lace.

"In perfect accord with present-day simplicity, this model is knitted in wide bands of stocking web and lattice lace. The welts and borders are in twisted ribbing and a lace collar adds softness to the neckline."

The next design could be knitted with long sleeves, instead of the short sleeves shown, if you had enough wool.  The pattern also suggests the colours to use.


"Diagonal lines are very much the vogue now and this little model is a happy example. It is knitted mainly in stocking web in a Dusky Pink with Wine-coloured diagonal stripes on yoke and sleeves, a rib welt and narrow rib roll at neck. It fastens on the shoulders. The stripes are simple to knit, a long strand being used for each with only one ball of main colour at a time."

The diagonal lines on the yoke and sleeves are really eye-catching, and quite simple to achieve.  All these patterns give quite detailed instructions, and so knitting the diagonal stripes is described very clearly:


"Each diagonal stripe is 2 sts. wide and moves over 1 st. every row from the centre to the sides, right and left. A separate strand of W [Wine] wool about a yard long is used for each stripe and the P [Pink] and W [Wine] wools are twisted round one another once at each change of colour to avoid gaps. The long ends of W [Wine] wool are easy to draw out when they become entangled and a fresh length can be joined on as needed."

I'm not sure I believe that  the lengths of Wine wool could be  easily untangled, but maybe it's true.

We associate the 1940s with broad shoulders emphasised by shoulder pads, and  here's a waistcoat designed to be worn with that style.

"Designed for added warmth over the new wing-sleeved models, this Cardigan is knitted in stocking web, with double epaulettes slightly flaring round the upper sections of the deep armholes. Single ribbing is used for welts and border. The lower sections of the armholes are neatly faced for strength."

And finally, another blouse, knitted sideways in narrow stripes.


"A cleverly designed model reflecting the mode of the moment is knitted with a raised red pin-stripe on a white ground. The entire garment is knitted sideways with a firm welt on smaller needles, and a neckline which can be buttoned high or worn with open revers. It is easy fitting, snug, and will make a delightful Summer as well as cooler weather blouse."

Lee Target pattern leaflets at that time often specified carefully how to make up the garment once you had knitted it.  The instructions for the striped blouse say:  "It is an excellent plan to tape the shoulder seams and back neck to prevent stretching." - another  reminder of clothes rationing.  Clothes had to last a long time, so it was worthwhile putting extra effort into the making up,  if it would help them to last longer.

I'm not tempted to knit any of these designs (and not just because 3 ply wool is so fine).  But it's fascinating to see how they fitted into 1940s fashion, as well as being so economical with wool.
Posted by Barbara at 18:47 No comments:

We are gradually recording and cataloguing the pattern leaflets in the Knitting & Crochet Guild collection, of which there are a lot.  (I may have mentioned that before.)  Recording (i.e. listing the numbers) is nearly finished, cataloguing is only just starting.   We are focusing on the earlier ones, particularly the 1930s, and many of the designs could be adapted to wear now.  But some garments have gone out of use completely - including the hand-knitted shorts for little boys in this Bairns-wear booklet.  (I call them shorts, but actually the leaflet calls them knickers. Times change.)


The booklet has several designs for jerseys and jersey suits (jersey + shorts) for boys aged 18 months to 3 years.   They are very pretty, and feature embroidery.   The designs are named after characters in children's books and comics, though the names seem to be randomly assigned - a design doesn't show the character it is named after. For instance, the cover design is called "Mickey Mouse", but doesn't seem to have any connection to the cartoon beyond its name.

Two other designs are named after Brer Fox and Brer Rabbit.


The "Brer Fox" suit is embroidered with little flowers above the pockets on the jersey.  "Brer Rabbit" does have a family of rabbits embroidered above the welt , but they are Mr Rabbit, Mrs Rabbit and Master Rabbit, according to the booklet.  And not very realistic rabbits, especially as the embroidery on the sample has "blue rabbits with pink eyes and tongues".

There are two other jersey patterns in the booklet, without matching shorts.  Tiger Tim was a cartoon  character in the Daily Mirror.

The embroidery on the jersey, disappointingly, is a rather crude dog, and not a tiger. It's described as a "ferocious animal", but saying it's ferocious doesn't make it look ferocious.

Teddy Tail was a cartoon mouse, from a comic strip in the Daily Mail.   Again, the jersey design doesn't feature a mouse, though it is a rather nice design with a zigzag pattern in garter stitch at the neck and hem, and a few embroidered crosses and dots.

Although the booklet is illustrated with black-and-white photos, the instructions specify the colours to use.  And some of the colours are surprising.  The Mickey Mouse design is to be knitted in sky blue and Tiger Tim should be mauve.  But Brer Fox and Teddy Tail are to be pink - pink is now so associated with girls that I doubt if anyone would knit something in pink for a boy.  And the Brer Rabbit suit is white - so impractical for an active toddler.

The jerseys, by themselves and without the unnecessary embroidery, are nicely designed - I like the ones with square necks particularly.  In a stronger, more practical colour they could work very well.  And I know that if I say that no-one nowadays would want to knit shorts for a little boy, some knitter out there will already be planning to do just that.  So I will only say that if you are a member of the Knitting & Crochet Guild, you can have a copy of the  booklet.
Posted by Barbara at 21:26 1 comment:

I love old magazines, so when I saw a 1963 copy of Flair magazine in an Oxfam bookshop, I bought it.  Flair was a monthly fashion magazine launched in 1960, and I remember reading it occasionally as a teenager.  (Sadly it died in 1970, merged into Woman's Journal).

It's fascinating, especially the ads.  We think of 1960s fashion as revolutionary - the era of miniskirts, Mary Quant, Vidal Sassoon hair cuts, shift dresses, skinny rib jumpers,...  But really that was the later 60s, and it had barely started in 1963.

Many of the clothes shown look very formal, like the suit worn with long gloves, an organdie scarf  and a big hat (modelled by Grace Coddington?)

Admittedly that's from an article How to Stand Out in a Crowd and deals with  "important social events" such as weddings, race meeting, regattas and committee meetings.  (Committee meetings?? No committee I've ever been on had meetings that were important social events.)  But elsewhere in the magazine, too, the clothes look rather stiff by today's standards, and although the possibility of wearing 'slacks' is mentioned occasionally, none are actually shown.

A feature "Underneath it all" suggests one reason why the clothes look more stiff and formal than we are used to - you were supposed to wear a corset.  And perhaps they were more comfortable than earlier corsets, because "in these days of miraculous man-made fibres, a featherweight corselette or pantie girdle will exert real control for all figure types".    Even under slacks - the feature shows a "pantie girdle that gives a really smooth line under slacks",  reaching to just above the knee.  And they were made for slim women as well as "the most ample figure" (size 40 in. bust, that is).

There are several ads for different brands of corset in the magazine, including the famous Silhouette ads, showing corsets worn over a  kind of black body stocking.

As the suspenders attached to the Silhouette corsets show, women still wore stockings, not tights. 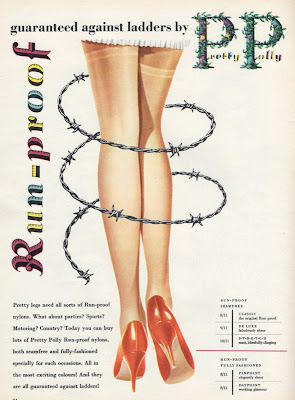 The magazine has a surprising number of ads for perfumes and perfumed products like talcum powder. (What happened to talcum powder?) Some of the French perfume brands still exist, and there's an ad for Chanel No. 5, already 40 years old in 1963.  But other names like Morny have gone, I think. 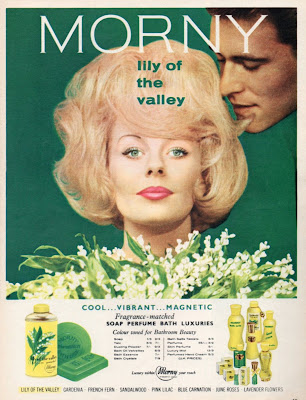 I was too young to be affected by most of this, though I did wear stockings for a short while . (Hated them.)  Women's clothes are so much freer and more comfortable now than in 1963 - a huge improvement.

And... knitting.  There is a knitting pattern in the magazine, although perhaps you shouldn't really expect much woolly knitwear in a June issue.  It's a collarless cardigan knitted in two colours. 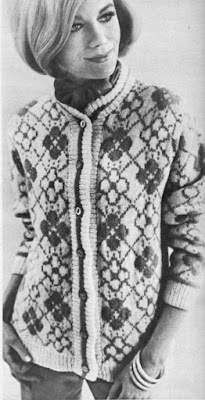 It's really not too bad - it wouldn't look too extraordinary if someone wore it now. The yarn is Lee Target Gaelic Floss, so I imagine something like a Shetland wool.  It's knitted mainly on 4.5mm needles, so possibly a DK weight.  For me, it's the most forward-looking thing in the magazine.  (But then, I'm a knitter.)
Posted by Barbara at 23:28 4 comments: