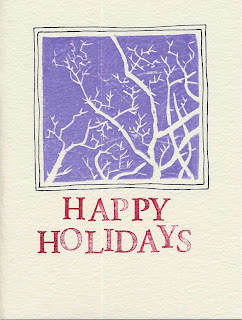 Yesterday, a large box arrived through the post from the U.S.,  with our Christmas cards and gifts from our daughter and her girlfriend.  (Slightly late, but never mind - it's nice to get presents over several days.)

Everything was beautifully wrapped in thick paper.  There were:

- a really useful miniature wind-up torch - I have a little torch on my key ring which was very handy until  it stopped working.

- a book of drawings (bought from an actual artist in an actual art gallery), How to Draw Your Family by Gabriel Liston, with useful advice, like "... once an event occurs you will want to draw it.  While you are drawing it other moments will be happening and you will miss them forever because your eyes were down."    I can't draw, but that certainly happens with photography, if you're not careful .

- and Peter Ackroyd's Venice, which we shall enjoy a lot.  We have been reading about Venice ever since we got back from our holiday - we shall have to go again.

We are very fortunate. 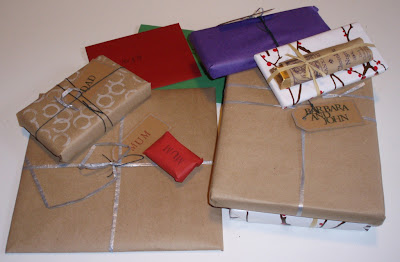 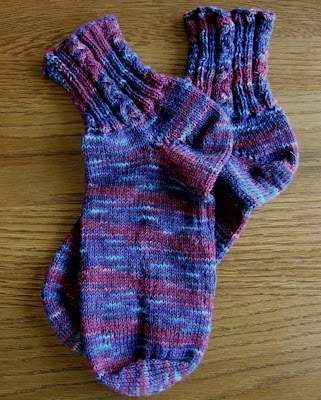 Now that Christmas has arrived, I can reveal - tada!- that I have been knitting more socks, as Christmas presents.  (The pair of fluffy socks that I wrote about here were also a Christmas present.)  I made one pair from the sock yarn that I dyed at the workshop I went to at Spun in November.  They are photographed straight off the needles and look rather weird without feet in them  I used plain stocking stitch for the foot part, to show off the colours of the yarn, but introduced four little cables into the double rib around the ankle, to make it more interesting.  I am very pleased with them.  The yarn is very soft , and should be hard-wearing too, as it's merino and nylon.  I have enough yarn left to make myself a pair of fingerless mitts, I think.


I have also knitted another sock (only one so far) in Cygnet 4-ply yarn, in a lovely blue-purple colour. The pattern is a modification of Wendy Johnson's diagonal lace socks. 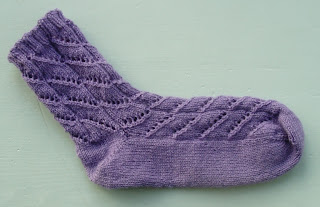 I did at least manage to finish the first sock in time to show it to the recipient (by webcam) on Christmas Day.  I think I have mastered a good set of techniques for toe-up socks - magic cast on, short-row heel, 'surprisingly stretchy bind-off' - although I this was the first sock where I was happy with the look of the short-row heel.  So now I'm getting bored with knitting socks.  When I've finished the second diagonal lace sock, I'll knit something else for a while.


The hand-dyed socks were for my daughter, and we also sent her a Henderson's Relish t-shirt (black with an orange design, to match the labels on the bottles).  She has never tried Henderson's Relish, but she can relate to the slogan (Strong and Northern).

By the way, we noticed Henderson's Relish on sale in Waitrose in Sheffield when we were there to buy Christmas food.  (For overseas readers, Waitrose is an upscale supermarket chain.)  According to the Henderson's web site, this is the only branch of Waitrose where you can buy Relish.  We were pleased to see that the locals had been stocking up on Henderson's for Christmas - the other sauces (Lea and Perrins, HP sauce and the rest) were untouched, but there was hardly any Henderson's left. 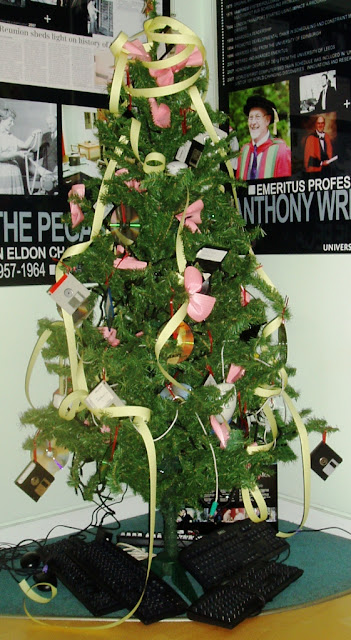 Yesterday I went to Leeds University to meet some friends I used to work with.  There was a Christmas tree in the School of Computing which I much admired, decorated with computing paraphernalia.   The yellow streamers are paper tape and the pink bows are made from (un)punched cards. There are floppy disks and a few CDs (nice and shiny) hanging from the branches and keyboards strewn around the base.

When I first got worked in computing, paper tape was on its way out and punched cards were the main input medium, although I don't recall ever using pink ones.  Someone must have kept a secret stash of them for the past 30 years or so.  I am very envious.  After they became obsolete, I acquired a box of unused cards.  They are excellent for shopping lists, but we used them all a long time ago.  And now floppy disks are obsolete, too - and not much use for anything except hanging on a Christmas tree.

It's a splendid display.

I was at Lee Mills yesterday with two of the other regular volunteers who have been working on the Knitting and Crochet Guild collections. It was of course a cold day, and the only part of the building that we can heat is the little upstairs office, so as a treat for ourselves we worked up there, sorting pattern leaflets.  We dealt with several boxes of mixed patterns, separating them by spinner. And we found three more Jester patterns over the course of the day.

I think that like the Winter Sports outfit I showed in the last post, these all date from around 1947.   The little scenes show a leisured lifestyle that was probably beyond the reach of most people in this country, but they certainly make the jumpers look enticing.  These are easily the prettiest of all the pattern leaflets that I saw yesterday.

I have found two especially attractive knitting patterns while looking through some of those that we have sorted so far in the Knitting and Crochet Guild store at Lee Mills.  They were produced by the Jester Company in Leicester, and are illustrated with charming drawings.  These are the only two Jester patterns I have seen at Lee Mills, and I think the company must have closed long ago.  They advertised their yarns in Vogue knitting in 1947, and the ad mentions pattern number 1019, so I guess that the winter sports outfit dates from around then.  I love the reindeer motifs on the jumper and around the hat - there are reindeer on the mittens, too.  Very seasonal.  The shoulders of the jumper are maybe too wide for today's fashions (although I think they are exaggerated in the drawing), and it is knitted in finer wool than we would probably choose for outdoor winter wear, but otherwise it's right in line with the patterned jumpers that are in fashion this winter. 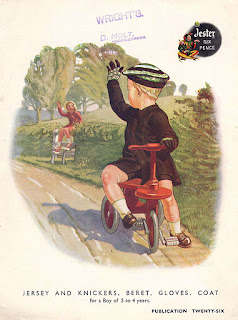 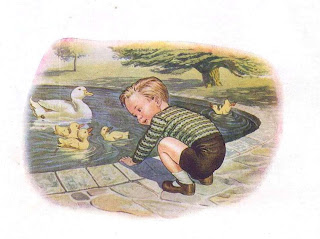 The second pattern is number 26, and I guess dates from the 1930s. The illustrations seem to be showing some story-book idyll, where little boys of four can ride their tricycles down a country lane to a duck pond, completely unsupervised. I love the drawings (apart from feeling slightly nervous about the dangers of that duck pond), but it's not an outfit that you would put a child into these days, especially not the knitted wool shorts.

I'm looking out for more Jester patterns - they must have produced a lot more than these two, and we have many, many boxes of unsorted patterns leaflets still to go through.
Posted by Barbara at 23:17 6 comments: 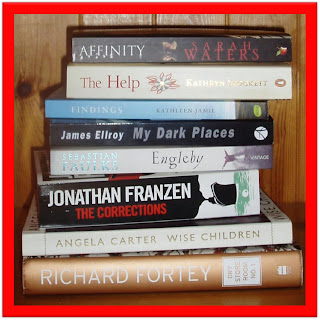 Yesterday, one of the two book groups I belong to had its Christmas dinner, and I made Christmas cards for the other eight members showing a stack of some of the books we have read.   The group has been running for nearly four years, and we have read  about 30 books over that time, so only a small proportion appeared on the card - I had to choose from those that I still have copies of.  The books I bought but really did not like have gone to charity shops, and a few books I borrowed from the library.  We borrowed a set of 9 copies of one book (Pyongyang, a graphic novel by Guy Delisle) from the Readers Group support section of our excellent local library service.   And I have lent my copy of the last book we read  (Jamrach's Menagerie by Carol Birch) to a friend.  What's left is a fairly random selection.

We have read quite a variety: mainly novels, but also non-fiction, short stories, poetry, .... One of the good things about belonging to a book group is that you read a wide range of books, and find that you enjoy some that you wouldn't normally have chosen to read.

And the photo makes a nice card, if not especially Christmassy.  The message is more:  "Happy Reading in 2012".
Posted by Barbara at 15:14 No comments:

Knit, Natter, Have a party 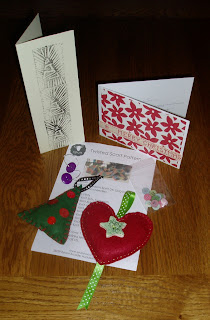 There is a knit-and-natter session every Thursday at the Spun shop in Huddersfield, which opened just over a year ago.   Yesterday, the  knit-and-natter regulars had a Christmas party.     Everyone brought some food  (all excellent), and there were Christmas crackers and mulled wine.   Lydia had made up a goody bag for everyone from the shop, with knitting patterns, some buttons, a magazine, a balloon, ....    And several people had brought hand-made gifts and cards for everyone, which was lovely.     We all got Christmas tree ornaments and a pair of stitch markers (the colour chosen to suit each person, so mine are purple - I do knit quite a lot of purple!)

Good food, good company, and we even did some knitting - it was a really good do.
Posted by Barbara at 20:32 No comments: 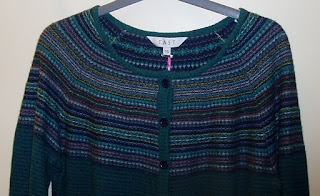 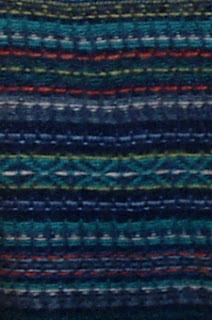 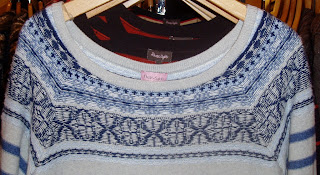 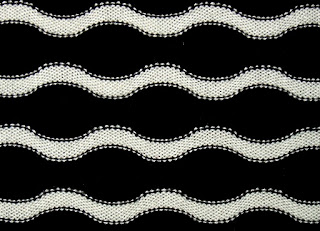 I wore it when we went out for lunch to celebrate having been married for a long, long time - 33 years and 4 months, or a third of a century.   That's not an anniversary that is recognised much, though I think it should be - we celebrate quarter and half centuries, so why not a third?
Posted by Barbara at 22:13 3 comments: