I am knitting Véronik Avery's Lace Ribbon Scarf for myself just now.  It's a free pattern that first appeared in Knitty in 2008 - a very popular pattern, with over 6,000 projects in Ravelry.  I have made a scarf for myself to this pattern before, as described here.  That's very unusual for me - I don't recall knitting a pattern twice before (and in fact I get a bit bored with knitting socks and mitts because when you've finished one, you have to start all over again and knit another.) 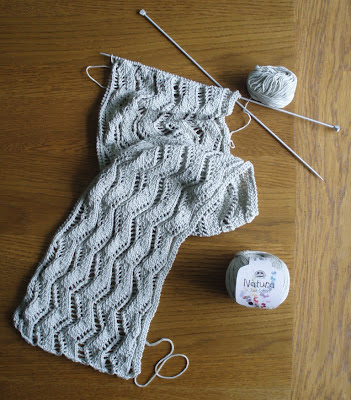 But it's nice to knit - the stitch pattern takes some concentration, but it's easy to learn.  I'm also knitting a pair of gloves (more later) but they need more attention.  It's useful to have a more straightforward piece of knitting in progress at the same time, so that I can read or watch TV while I am knitting.

I have changed the stitch pattern a little bit this time.  The scarf I made before, in variegated sock yarn, has a tendency to roll inwards, in spite of my best efforts to block it.  So this time I have put a few purl stitches on the right side to try to avoid that.  It makes the stitch pattern more textured, which I like, though some people might not, and it does seem to be keeping very flat so far, though that might be because of the yarn, I suppose.

Véronik Avery's introduction to the pattern says that she is emulating stylish people who wear scarves all year round.  Her model does look very chic, sitting outside in the sunshine, pouring a cup of tea.  That's the look I'm aiming for - though I don't claim to be chic, and I don't drink tea.  At least I'll have the scarf.
Posted by Barbara at 17:30 3 comments:

I usually find 1930s knitting patterns for jumpers and cardigans quite attractive - many of them could be adapted for today without much difficulty, except that they are usually in a small size and often stop at the waist.  But one thing about 1930s fashion that I don't like is that women were not properly dressed out of doors without a hat.  I never wear a hat except to keep the weather off, so I would have found that hard to cope with.  And proper hats from a milliner seem to have been very expensive (I have vague memories from books and films of indulgent husbands suggesting that their wives should buy a hat to cheer themselves up, or wives guiltily spending the housekeeping on a new hat.)  So if you had to have a hat but hadn't got the money, what did you do?  Obviously, you made one. 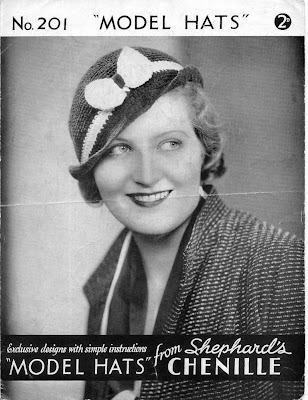 This pattern leaflet for two hats in Chenille yarn is from the Lee Mills collection - one is crocheted and the other knitted.  The description of "Marian", the crocheted model, is a period piece in itself: "On the side of the head, over the right eye, over the face, or off the face, this model lends itself to any wearing angle.  The brim is most accommodating, it stays put in the "line" most suitable for the head it is to grace. A cheeky bow at the front gives just that required finishing touch for such a jaunty little hat." 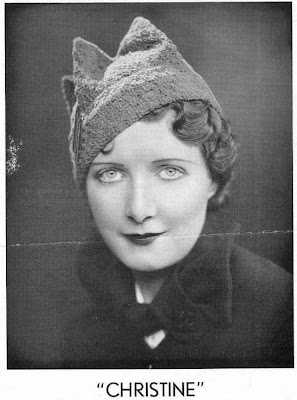 The other model, "Christine" is knitted in the same yarn: "This is perhaps the newest hat of the season.  It has height which strikes quite a new note.  A plain bar chromium pin fastened at the side is the only decoration.  The original of this model was carried out in Royal Blue."

I can't help feeling that "Christine" would be quite difficult to carry off successfully.  (It's a knitted hat with sticking up pointy bits!  It's ridiculous!)   If you were aiming at looking fashionable and ladylike,  the rest of the outfit, and your hair and make-up, would have to be immaculate.  Not one to be revived, I think.
Posted by Barbara at 10:27 3 comments: 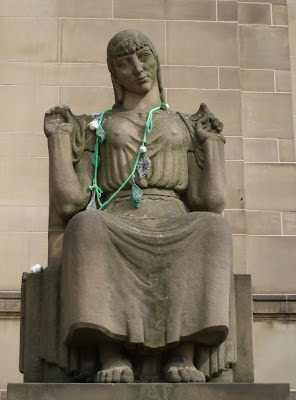 There are two Art Deco statues in front of the library in the centre of Huddersfield.  Earlier this month, one of them had a garland of knitted white roses.  I assume that it was put there for Yorkshire Day (1st August), the white rose being the symbol of Yorkshire.    If so, it had been there for a couple of weeks when I took the photo, so was perhaps past its best.  And now it has disappeared.  A pity - it was nice while it lasted.
Posted by Barbara at 22:33 No comments:

Whenever Team GB has won a gold medal in the Olympics, the Royal Mail has painted a postbox gold in the town that the medal winner comes from.  So we now have a gold-painted postbox in the centre of Huddersfield (on Railway Street) for Ed Clancy, who was one of the winning team in the men's team pursuit in cycling. 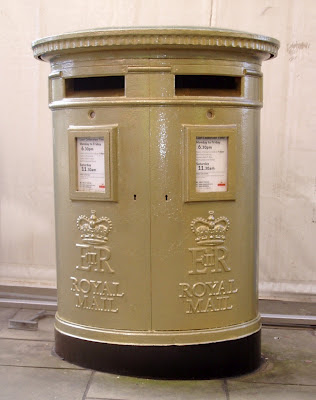 Strictly speaking, Ed Clancy doesn't come from Huddersfield but from Holmfirth, a small town 8 miles away, or even more  precisely, from Upperthong, a village on the edge of Holmfirth. But the Royal Mail has evidently decided that Huddersfield is near enough, and for those of us that live here, it's good to see the gold pillarbox and think of a local person doing so well.   (What's more, Yorkshire athletes have done very well indeed - the county has done better than many countries, and would have a respectable place in the medals table in its own right.  But Yorkshire folk are famously modest, so I won't dwell on that.)
Posted by Barbara at 18:50 3 comments:

An Echo of Blackcurrant

I've finished a jumper I have been knitting in Twilley's Echo, a recycled DK cotton yarn.  It's made from old clothes - one of the colours looks like denim jeans.  The colour I chose is a sort of dark purply pink - a bit like a blackcurrant fool, I think.  ( We have blackcurrant bushes in the garden, so I have been I have been eating a lot of blackcurrant fool and similar dishes lately.)  It has tiny flecks of other colours in it, too - white, blue, red.  So either it has not been dyed at all (though in that case, where do they find a consistent supply of old clothes in that colour?) or dyed before it is spun. 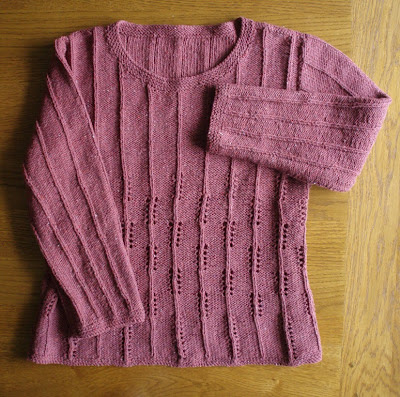 The stitch pattern I chose is mostly reverse stocking stitch, but with ridges of stocking stitch.  I made a pattern of eyelets either side of these ridges on the lower part of the back and front.  I liked the idea of varying the stitch pattern, and I wanted to experiment with shaping the waist by hiding the increases or decreases in the eyelet pattern. The eyelet pattern is made by yarn-overs either side of the ridge, balanced by a 3-into-one decrease with the central stitch (the ridge stitch)  ending up on top of the other two.  (I used a cable needle to do that.)  It's easy to do an extra pair of increases or an extra pair of decreases at the top of a column of eyelets, and they are not noticeable.    So the waist shaping isn't just at the sides, but all round.  The distances between the ridges decrease and increase, but without looking closely, it's not easy to see where it's been done.

I was planning to do something similar on the sleeves, but then decided that increases and decreases aren't very visible in reverse stocking stitch anyway.  So I did the sleeve shaping by gradually increasing the number of stitches between the ridges from 5 to 8.   It gives an interesting look to the sleeves.  (Not an original idea, though - I got it from a book by Marianne Isager.)

I'm pleased with the neckline, too - it's nicely shaped.  The neck edge, cuffs and bottom edge are all in garter stitch.  I used not to like garter stitch, and still don't use it for large areas, but for an edging it looks good.

I finished the jumper about 10 days ago, when the Olympics had already started.  I did a lot of the sewing up (which I do not like at all) while watching the men's cycling time trial event.  A good event to watch while sewing - it lasts well over an hour, there are few sudden crises or dramas, and it's quite easy to understand what's going on.  (Unlike the Tour de France, for instance - I watched that for several evenings in a row with my brother-in-law and found it completely incomprehensible, ins spite of his explanations. Or the keirin, which is just bizarre.)   And it gradually gets more exciting and faster, because the most likely winners start last.  And Bradley Wiggins won!  Brilliant!