Swatching for a Scarf

I have been trying out stitch patterns for a scarf I'm planning to knit for my sister.   I bought the yarn at Ribbon Circus in Hebden Bridge, at the Crafternoon Tea at the beginning off this month.  And I knitted a swatch of a possible pattern, Different Breeze, some time ago - the first thing I knitted when I was able to hold knitting needles again after breaking my wrists.  But although it's a very pretty lace pattern, there are no easy rows - you need to concentrate on every one.  It's going  to be a long scarf,  and so I'd like some rows in every pattern repeat where I can knit without thinking.

For other possibilities, I've swatched a couple of stitch patterns from Barbara Walker's Treasury of Knitting Patterns.  The first is Lace Rib.  It meets my criterion - every other row is a repeat of p3, k2, so doesn't need much thought.


So that was a strong candidate.  But being based on rib, it naturally concertinas inward - the swatch has been pressed to flatten it out, and even then it is perhaps not as drapy as I would like.

I have also knitted a swatch of Dewdrop Pattern.  It's an 8 row pattern with 6 rows of k3, p3.  The lacy increases and decreases all happen on the 4th and 8th rows.  So it will be quite fast to knit, I think.


(By the way, if you look at Dewdrop Pattern in A Treasury of Knitting Patterns, you'll see that my swatch doesn't look very like Barbara Walker's.  Hers seems a bit more stretched out, vertically.)

On the 4th and 8th rows of the pattern, you do a three-into-one decrease, which according to the instructions should be done as slip one, knit 2 together, pass slipped stitch over.  But I found that the slipped stitch gets quite stretched when is passed over, and that stitch becomes a prominent part of the pattern, so that it isn't symmetrical.  You might be able to see that in the bottom half of the swatch. (Again, Barbara Walker's doesn't seem to look like that.)

So I tried a different 3-into-1 decrease, where the centre stitch is on top.  That's also easy to do.  First, slip the first two stitches together, knitwise,   That puts them on the right needle in reverse order.  Then knit the 3rd stitch, and pass the first two stitches over it, either one at a time or both together.  The result is that the 2nd stitch, i.e. the middle one of the three, ends up on top, with the other two tucked underneath it.   I've done that in the top half of the swatch.

So I think dewdrop stitch will be my choice for the scarf.   It's easy to knit, it lies flat, it drapes nicely, it's pretty.  And another plus: although the pattern isn't reversible, and the wrong side looks completely different to the right side, it's quite presentable.

I wrote here in January about a hugely long sampler that we have in the Guild collection, made by a knitter called Gladys.  There are about 940 stitch patterns in it.  Gladys intended to reach 1,000 but had to give it up because of arthritis in her hands - she never cast it off, though, and when it was given to the Guild after she died, it was still on the needles, so perhaps she had hoped to finish it.

The London branch of the Guild has been studying the sampler and is planning a couple  of projects based around it.  One is to add another 60 or so stitch patterns, to reach Gladys' target.  Another, which is under way, is to re-knit some of the most interesting stitch patterns and maybe publish them.  I volunteered to knit two of the patterns, and have just finished and posted them.  We were asked to knit 20cm. squares, with a garter stitch border. They are all in the same wool - 4-ply merino in cream.

My first square, pattern no. 491, is a very pretty pattern of cables separated by open-work panels. 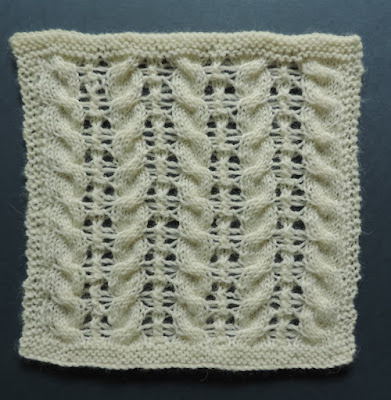 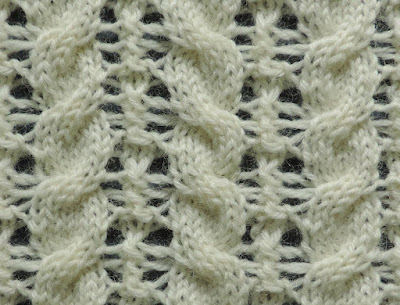 The other (pattern 370) is not as successful, I think.  It has bands of reverse stocking stitch, knitted on size 10 (3.25mm.) needles, separated by two rows of a more open stitch knitted on size 7 (4.5mm.)  needles. But the two fancy rows don't show up as much as I think they should, partly because of the tendency of the stocking stitch to curl - even after I stretched the swatch quite a lot.  All you get is a general impression of horizontal channels between the bands of reverse stocking stitch, punctuated by little holes.  It seems to have looked better in Gladys's original, so perhaps it doesn't work well in this yarn. 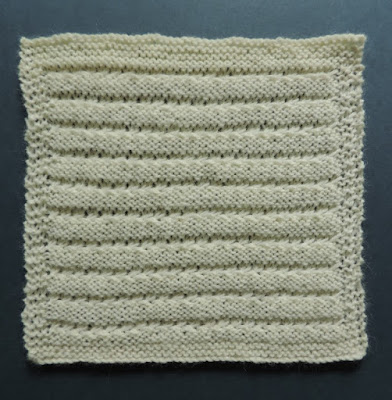 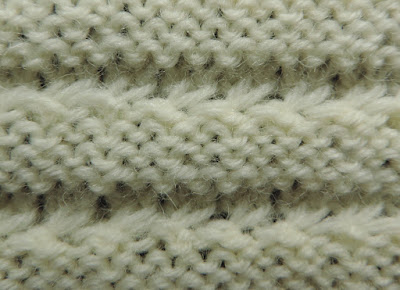 Imagine knitting swatches of over 900 different stitches! Would you be able to remember them all, even if you could find that many in the first place?
Posted by Barbara at 21:06 2 comments:

The local Women's Institute (Marsh, Huddersfield - aka Cupcakes & Cocktails)  have been making planting 'braskets' out of bras.  They have made a display of the results alongside the main road through Marsh, outside the Junction pub - very eye-catching. 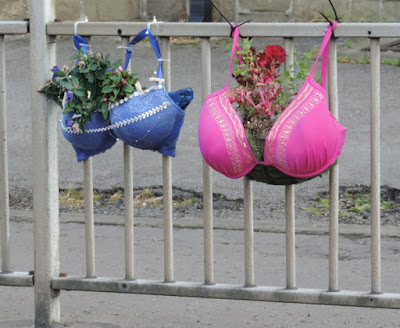 It's all to encourage recycling of old clothes, allegedly.  Though this particular approach works best with larger sizes - the less well-endowed will have to find some other use for old bras. 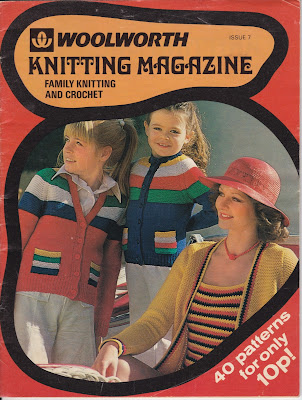 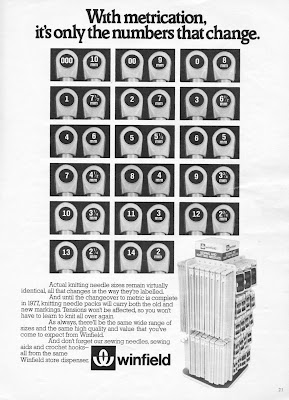 Yesterday, I went with a friend for the monthly Crafternoon Tea at Ribbon Circus, the yarn shop in Hebden Bridge.  A knit-and-natter with tea/coffee and lots of very good cake on offer - a lovely way to spend a Sunday afternoon.

And I bought some yarn - Juniper Moon's Herriot, for a scarf for my sister.  It's mostly alpaca with some nylon (she can't wear wool), and is very, very soft.  The colour is Travertine - a silver-grey. It will make a delightful warm scarf. 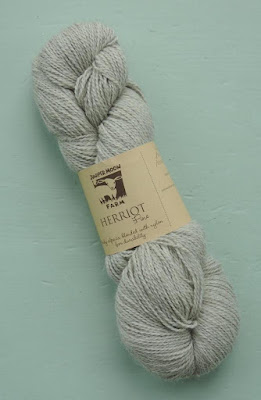 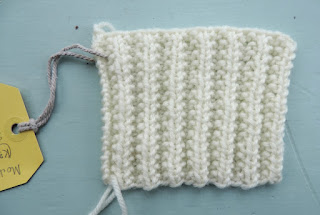 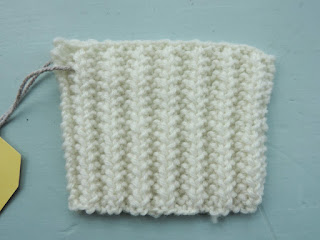 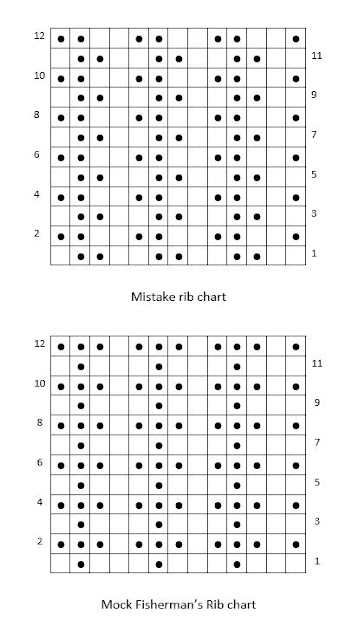