It was a beautiful day today with clear blue skies and sunshine, and it was warm.  I was working at Lee Mills sorting knitting patterns for most of the day, and the store only has north facing windows, so we aren't really aware of what the weather is doing outside - the internal temperature varies over the year between cool and very cold.  But it was warm today enough to sit outside to eat our lunch-time sandwiches - astonishing for March.  The surroundings aren't very beautiful - it's a rough stretch of tarmac with our cars and the skip parked on it, with a backdrop of various large bits of metal that belong to the other businesses on the site.  Even so, it was lovely to enjoy the sun.

Most of the pattern leaflets in the collection were produced by spinners and other companies who published lots of them - it was part of their normal business. But I also have a file of "oddities" - knitting patterns that were produced by companies or organisations that normally had nothing whatever to do with knitting.   Several oddities turned up today.  Three of them are "oddities: subsection soap" and were published by manufacturers of soaps and detergents, to promote use of the product.


I suppose if you want to persuade knitters to use your product to wash their hand knitted garments, it makes sense to offer a free knitting pattern.  It is an idea that has occurred to several manufacturers over a long period.  The INO Flakes pattern dates from the 1930s, and was one of a series - this is no. 38. The Dreft pattern is from the late 1960s, I guess (before decimal currency was introduced in 1971).  The Stergene pattern is more recent, from the era of picture knits.   (Why the elephant?  No idea.)

The final oddity is just very odd indeed. What's the connection between British Coal and knitting? Was the pattern free with a sack of coal, or what? 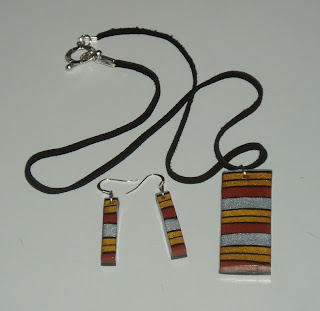 A few weeks ago, my craft-y friend Steph ran a workshop on making buttons in Fimo modelling clay for the Thursday Knit and Natter group.  She has made a lot more things in Fimo since then.  She bought a pasta machine to help - it makes softening and rolling out the Fimo much easier, and gives more even results.  (Not to be used for making pasta afterwards, though.)  At the Knit and Natter session today, she brought along some jewellery sets that she has made, and I bought the one in the photo.  I love the combination of colours.  Two of the clays she has used are slightly sparkly, and the finished pieces have been glazed.   A long way from plasticine.
Posted by Barbara at 22:35 No comments:

I don't usually write about my knitting projects until they are finished, because sometimes they don't work out.  Sometimes I have to unravel the whole lot and use the yarn for a different project entirely, and writing about that would be very disheartening.   So for instance,  I was knitting a cardigan for several months last year which has not gone well at all - I have knitted most of it twice and it looks like I shall have to abandon it.   I was following the pattern rather than tinkering with it as I usually do, so it is annoying that it hasn't worked.   And I don't want to write any more about it.

But I think that maybe I should write more often about work in progress, when I am modifying a pattern or making it up as I go along.  So here's one I'm knitting now - though actually it's nearly finished and I'm confident that this one is going to work, because it's made top down and I can try it on as I go.

The yarn is some 1970s yarn, that we found at Lee Mills, called Twilleys Spin Knitting.  I had never heard of it until I was sorting the Twilleys pattern books, and found one for Spin Knitting which seemed intriguing.  Then the following week, I saw a pack of it in a pile of odd balls of unwanted yarn, and bought it. 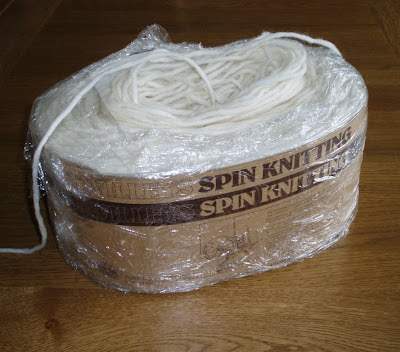 The pack contains 550g of yarn in a single length.  It is a single ply, and it gets twisted slightly as you knit it and that "completes the spinning process", it says, hence the name.  It's oiled wool (so makes your fingers soft but smelly) and a natural creamy colour. The pack label warns you to keep the plastic wrapper on, except for a hole in the top for the yarn to go through - otherwise there is a danger that the whole lot would fall out of the paper band into a horrendous tangle. 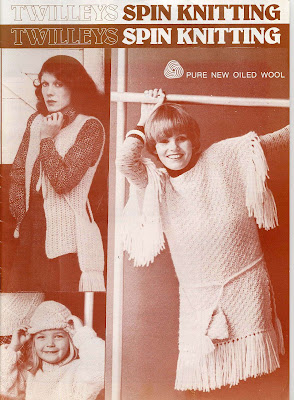 The pack does not give the length of the yarn, except for saying that it is much longer than the same weight of other yarns of similar thickness, so it would have been difficult to estimate what I could knit with it, without the pattern book.  But there was a pattern for a long sleeved jumper in my size, that would use exactly one pack, so that's what I planned to make.

Although the original plan was that I would knit something like the diamond pattern jumper in the pattern book, I wanted to knit it top down rather than bottom up (in case I ran out of yarn, which would be easier to cope with around the hem than around the neck) and in the round.  I based it on Barbara Walker's book Knitting from the Top, and followed her instructions for a raglan-sleeved pullover.  Except that she adds the neck band afterwards, by picking up stitches around the neck, and I do hate picking up stitches.  So I figured out a way to start with the neckband - tricky, because as well as doing short rows to make the front of the neck lower than the back, I had to decrease at the front after the neckband, because the front of the neckband is longer than the back.

That all worked fine, except that I had originally planned that the jumper would be in reverse stocking stitch, like the one in the pattern book, but then I decided that the knit side looked neater than the purl side, so I turned the whole thing inside out.  And then when I got to the diamond pattern, I thought that it would not show up so well against the knit background, so I switched back to reverse stocking stitch. 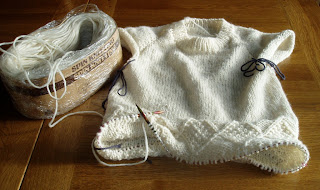 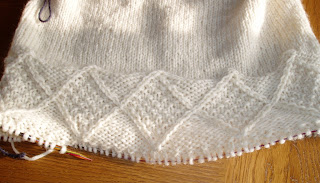 So far, the jumper has been knitted with a single continuous thread, although I shall have to break it to knit each sleeve.  And there will not be a single seam in the whole thing, yippee.  I guess it's a bit retro, really, though as I can remember the 1970s perfectly well it seems a bit strange to think of it that way.

I don't think the Spin Knitting yarn can have been a great success - it's not very portable and not very economical either. If you wanted to knit a larger size of jumper, you would need to buy two packs of yarn and then have a lot left over - the pattern book is full of patterns for hats, scarves and mittens to use up the surplus.  But I think my jumper will turn out well - warm but light.  (I'm hoping that I can get rid of the oily smell when I wash it.)  I'll post about it again when it's finished.

By the way, someone has yarn-bombed Saltburn pier, with an Olympic-themed scarf, 50 yards long.  Do take a look - it's wonderful.
Posted by Barbara at 18:35 5 comments: 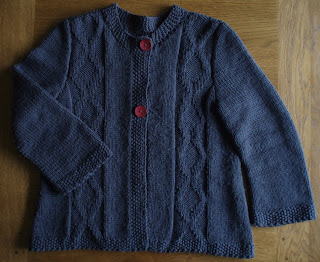 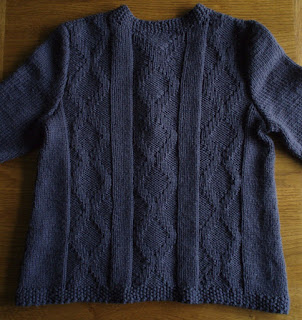 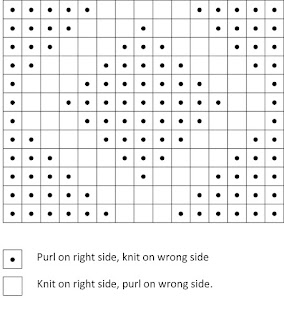 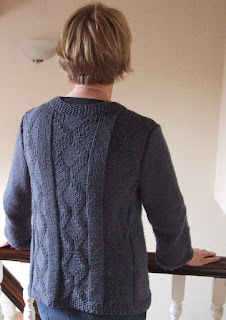