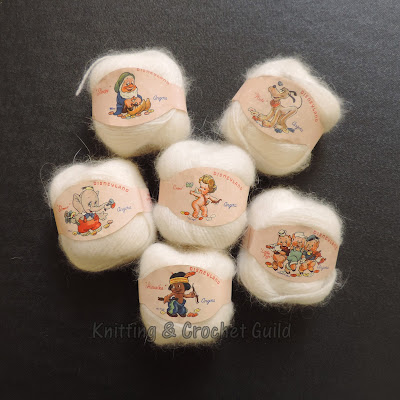 These six balls of angora knitting wool were added to the Knitting & Crochet Guild collection this week.  They were found in a charity shop by one of the volunteers working on the collection.  The brand is Disneyland, and each ball band has a Disney cartoon character on it - Sleepy (one of the Seven Dwarves), Pluto the dog, Elmer the elephant, the three little pigs, Hiawatha, and Cupid.  The ball bands say that there were 26 Disney characters in all, and that it is Hand Knitting Wool, though oddly they don't give the weight.  They are in fact quarter ounce balls (7 gm.), which is remarkably small.

I had heard of Disneyland Wools before, because we have a few of the knitting patterns.  Most of the designs are straightforward and have no cartoon connection, apart from a child's Mickey Mouse twin set (below), although most of the leaflets do have a group of Disney characters on the back, including Snow White and all seven dwarves.

Several of the designs are multi-coloured, and shown on the leaflets in very bright colours.

But there are also simpler designs in single colours.
None of the pattern leaflets that we have are for angora - they all specify 3-ply Botany Wool (merino).   So I can't tell what garments were to be knitted with ¼ oz. balls of angora. Or perhaps they were intended for trimming on garments mainly knitted in botany wool.
From the style of the designs, the leaflets appear to date from the late 1940s or early 1950s. The leaflets give the name of the producers of the yarn - the British Wool Company, of Wembley.  (Rather a presumptuous name, I think, given all the other British wool companies in existence at the time.)  Grace's Guide gives a little information about the company, and shows some very nice ads for Disneyland Nursery Wools (the botany wool) and Disneyland Angora, dating from 1947, when the company exhibited at the British Industries Fair, to 1953.   It's interesting that the botany wool is referred to as nursery wool, i.e. for babies and very small children, when the pattern leaflets are obviously aimed at a much wider age range.
I have not seen any ads for Disneyland Wools in the needlecraft and knitting magazines where the bigger spinners advertised.  But I have searched the newspapers available in FindMyPast for Disneyland Wools.  There are mentions of the brand from late 1948 to 1954 (though most are in 1949 and 1950), mainly in ads for yarn shops in local newspapers.  One intriguing piece appeared in the Dundee Courier in 1949:

CARTOON CHARACTERS FOR COLOURS
Children familiar with fairy and animal characters on the screen will be able to tell their mothers the colour of wool they would like in their clothes. They will not name the colour, but the character which stands for that shade, provided a particular brand of wool is purchased. The 26 choices include:—Mickey Mouse— scarlet; Pinocchio—blue; Donald Duck—navy; Dopey—yellow; and Bambi—brick. Menzies have a window display in their Princes Street (Dundee) shop of this "Disneyland" nursery wool which is 1s 10½d an ounce. Each ball has a character-stamped paper band, and boxes containing 1 lb. [i.e. 16 balls] of a particular shade are available, though the balls may be had singly.

(I am a bit disappointed that Bambi isn't fawn, though I suppose that brick might be approximately the colour of a deer.)  This must have been the original way that the company used the cartoon characters, i.e. on botany wool, with a character for each colour.  From a couple of ads I have found for the angora, it was only sold in about 8 pastel colours, so it made more sense to use all the characters on each colour.
More colour-character combinations appear in the instructions for the Mickey Mouse twin set.  Snow White is, of course, white, and sky blue is represented by the Blue Fairy in Pinocchio.  Figaro the black-and-white cat, also in Pinocchio, is black.   The colour names are not used in the patterns for adults or older children: the company perhaps felt that referring to colours by cartoon characters might deter older customers.  And perhaps they were, in the end, right — even though the cartoon characters on the ball-bands are charming, the brand doesn't seem to have lasted very long.
Posted by Barbara at 16:59 2 comments: