I know that for most people, the words "fascinating" and "crochet hooks" don't naturally go together, but bear with me. Early crochet hook designs are very varied - the handle gives a lot of potential for decoration, and there are some ingenious methods of combining two (or more) hooks with only one handle, and ways to protect the ends of very fine hooks.  I am not a crocheter, except very occasionally, and I'm especially not a crocheter with the size of hook that you can barely see, used with thread no thicker than sewing thread. But even so, I do find many of the crochet hooks in the Knitting & Crochet Guild collection fascinating.

And last week, at our usual Thursday morning knitting session, a friend brought several things to give to the collection, including these 15 crochet hooks.  In case you think they look interesting too, I've written about some of them below. 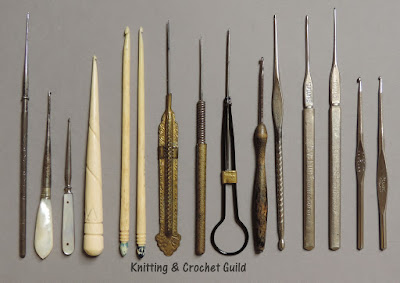 Many of these hooks are late 19th or early 20th century - I've been looking at Nancy Nehring's website here, which gives a lot of information on the history of crochet hooks.

First is a 19th century hook (rather rusty, as early steel hooks are liable to be).  It has a patent number (4439) on the sheath.  I can't trace the patent, though Nancy Nehring dates it to 1888.  I imagine that the patent was for the idea of including a tubular sheath (top) that can fit over the hook to protect it, when it is not being used, and otherwise can fit over the other end to form a handle.

Another early hook also has a tubular sheath - brass in this case.  There are two hooks of different sizes, and the sheath can fit over either to form a handle.  Nehring attributes this hook to John Shrimpton and Son (here).

In the next one, the hook is attached to a flower-shaped slider so that it can be retracted into the handle.  (But there is nothing to hold the slider in place, when the hook is in use, so this may not have been a very successful design in practice.)

The next, with a handle made from a loop of wire, is hook by another Shrimpton, Z Shrimpton & Co.  It has two hooks of different sizes, that can pivot in the middle.  The brass slider can be moved (to the left, in the photo) to hold the hook that's not being used within the handle.

And here are two later hooks - the design was patented in 1911.  They look identical, but one is called the "Evelyne" and the other the "Eclipse".  They are like a flattened version of the first hook I described - there is a sheath that either fits over the hook (top), or can form a handle (bottom).  By this time, the idea of having a flattened grip had been introduced, and very quickly seems to have become almost universal for metal crochet hooks.

There are three hooks in the donation that aren't steel.   Two are bone, and the same design. One of them is marked 'Bates' - an American company that still makes crochet hooks.  I think the different coloured ends are to show at a glance the size of the hook (at least once you know that dark blue means size 1 and light blue means size 5).

And finally, I think that the hook below might be ivory.  It is a very uniform colour, whereas bone tends to develop brown marks with age, and it feels much smoother and denser than the bone hooks.

Altogether, it's a diverse and fascinating collection, just by itself.  Thanks very much, Debbie.
Posted by Barbara at 20:21 2 comments: 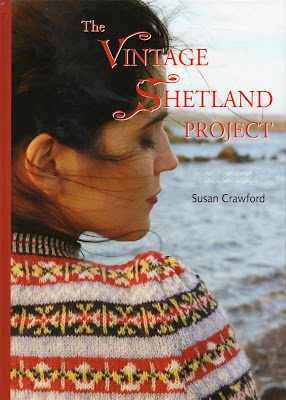 Since I last  wrote, we have been on holiday in Spain -  visiting Seville, Cordoba and Granada, and several other smaller places too.   We had a very good holiday, saw lots of historic sites (Roman and Moorish, mainly), ate lots of delicious food,...  But I had a few days of not feeling very well after we got back, so stayed in mostly, not eating much.  The weather was awful, so staying in wasn't much of a problem, and I did get quite a lot of knitting done.  The final part of the On the Other Foot socks Mystery Knit Along was published just before we went away, so I had the first sock to finish, and hadn't started the second sock.  And now they are finished. 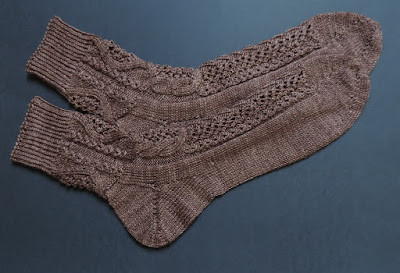 I am very pleased with them - they fit very well and are the most luxurious socks I have ever worn (wool and silk!). Though I should maybe take a better photo on a lighter background.

I did make a couple of modifications to the pattern.  The cables and lace option I chose for the ankle part had a few bobbles in it, but I have a strong aversion to knitting bobbles, and didn't like the idea of bobbles on my socks, so I left them off.  (Sorry, Ann and Sarah, but they are my socks.)   And the options for the cuff sounded interesting, but were quite narrow. I like a deeper stretchy cuff, so I knitted mine in a twisted rib instead. (My socks.)

I guessed that the lace and cables options I had chosen were those designed by Sarah, mainly because the socks I knitted for Susie for Christmas (described here) to Sarah's pattern The Chain featured one of the stitch patterns used in On the Other Foot.  But I saw Ann at the Huddersfield Knitting & Crochet Guild meeting last week, and she told me that I had actually chosen the options that she designed - the colour work options were those designed by Sarah.  You can see two pairs of socks, one using Ann's options and the other using Sarah's, on Ann's blog here.  The colour work socks look very good, too - and several of the projects on Ravelry have mixed the cables & lace options with the colour work options, and that also works well.

And just to prove that we have been to Spain, here's a photo of me looking in the window of a yarn shop in Seville.  (I didn't go in, though.) 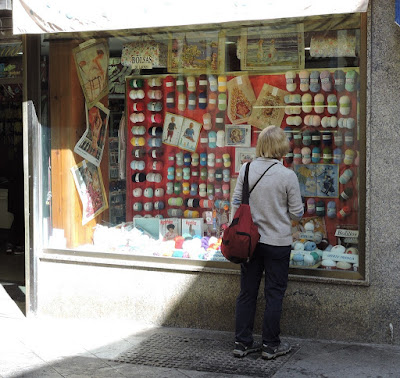