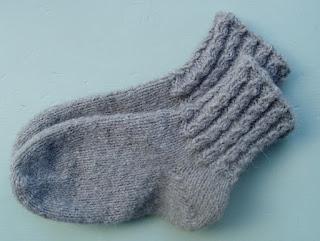 I have finished my second pair of toe-up socks - this time they are intended to be bed-socks, and the yarn is a soft, slightly fluffy yarn with a good proportion of wool and alpaca with acrylic (Wendy Osprey).   It is an aran-weight yarn and I used 4 mm needles to give quite a dense fabric. I have 30g left out of the 100g that I bought, so almost enough for another sock.

I have changed my sock-knitting technique a little bit.  At the dyeing workshop two weeks ago, someone told me about Judy's magic cast-on. It really is an amazing method - you cast on the number of stitches that you need for the narrowest part of the toe, and then start knitting in rounds straightaway, increasing at both sides of the toe until you have the number of stitches you need for the main part of the sock. And the most amazing part is that the casting on is invisible - there is no detectable break in the knitting over the end of the toe.  Magic!

This is a lot easier, to my mind, than the short-row method I used for my first pair of toe-up socks, which started with a provisional cast-on and used short rows to shape the toe-cap. Unpicking the provisional cast-on is a bit fiddly, and there is the slight disadvantage that you end up with one fewer stitch than you cast on in the first place.

By the time I had got the the end of the first sock, someone else told me about Jeny's Surprisingly Stretchy Bind-off (cast-off in British English). Another really useful invention.  I had been intending to use a sewn cast-off for these socks, to keep the top stretchy, but thought it might be tricky given such a fluffy yarn. Jeny's Surprisingly Stretchy Bind-off is a variation on the usual cast-off method with two needles.  It is very easy, and indeed surprisingly stretchy.

Next.... another pair of toe-up socks with the skein of sock yarn I dyed at the workshop.
Posted by Barbara at 20:32