Last weekend  I was at the University of Cardiff for a Knitting and Crochet Guild meeting.  There was a day of workshops on Saturday, and the AGM on Sunday morning, as well as lots of talking, knitting and crocheting in between.  On Friday evening I gave a talk on the Lee Mills periodicals collection, or at least the part of it that deals with hand-knitting.  It was an interesting challenge to tell a coherent story about hand-knitting in this country since World War I, just based on the magazines that I have catalogued so far.  I talked about women's magazines as well as the more specialised knitting and needlecraft magazines.  Lots of pictures, of course, of magazine covers, and a few knitting patterns from the magazines, some that still look quite attractive and some that you could only wear to a fancy dress party. 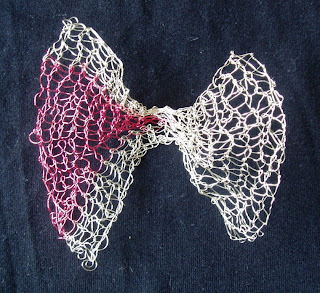 There were three workshop sessions on Saturday, but I only went to one of them - a workshop on knitting with wire, given by Mary Graham.  It was fascinating.  I thought beforehand that it would be quite hard work to knit with wire, but it is not.  Mary provided us with very fine wire in a range colours, and ordinary metal knitting needles.  An advantage is that you don't have to bother about tension, and the final shape of what you make depends a lot on how you tweak the piece afterwards, so there aren't too many rules.  I was really pleased with the piece that I made.  I didn't have any plan in mind when I started - I was just knitting a rectangle to get used to the material, and then incorporated a dart (in pink) using short rows, which was one of Mary's suggestions for starting to make a three-dimensional shape, and another in the silver wire.   Then I bent it into a 3-d shape  - a butterfly? a bow? - and I think it's rather pretty, and wore it as a brooch.    Of course, it's technically very inept compared to the pieces that Mary showed us - her knitting is much more even and they look as though they were meant to turn out the way that they did, unlike mine. She has made some beautifully shaped pieces - I especially liked one that she showed us in which she used rapid increasing to make a ruffle.  But I'm pleased with my first attempt, and I plan to do more. 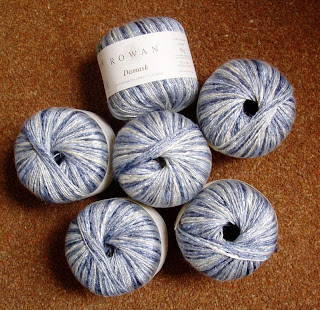 For giving the talk on Friday, I got a voucher from the Guild to spend at the traders' stalls, and exchanged it for some beautiful laceweight yarn.  So the next lacy scarf I knit might be for me.  I also did very well out of the raffle - I won  6 balls of Rowan Damask in a pretty pale blue colourway and a book - Contemporary Classics by Jean Moss, signed by the author (one of the Guild's patrons).

Altogether it was a very successful weekend. It was great to meet so many enthusiastic, knowledgeable and expert knitters and crocheters.  A disappointment was that we didn't have much time to see Cardiff, apart from a couple of hours at the castle at St Fagans - must go back.
Posted by Barbara at 18:39