The Guild collection at In the Loop

I'm told that work is still in progress on the recordings of the talks at the In the Loop conference in July, so in the meantime, I will write a post based on my talk.

It was a short talk (20 minutes) on a huge collection, so I could only give an outline of what there is. Brief summary: knitted and crocheted items, tools and gadgets, yarn samples and shade cards, publications of all kinds (books, magazines, pattern leaflets and booklets).  Lots of everything.  At the conference, after outlining what's in the collection I talked about how we choose what to present in a trunk show - a suitcase full of selected highlights.  We have been doing trunk shows for a few years as a way of making the collection accessible to groups around the country - the first one was at Sheffield in 2014.  (I wrote about it here.)

When we choose a piece for a trunk show, we have to be able to say something interesting about it.  Ideally, we would like to be able to tell its story: who made it, when, what pattern did they use, who was it made for, and so on.  We no longer accept new donations of knitted or crocheted items unless they come with a story like this, but many of the items already in the collection have no story of that kind.

Sometimes, lack of a story doesn't matter - some of the pieces in the collection are such fine examples of craft that they speak for themselves.

Here is a Victorian pincushion cover that I have shown before on this blog, because it's an example of my favourite leaf and trellis pattern (aka print o' the wave) - I showed it here. Like many of the older items in the collection, it was bought at an antique textiles fair, and had no provenance.  We have no idea who made it and no way of finding out.  But it's a beautiful piece of work.  We don't know when it was made, but I'm sure it's Victorian.   It's possible that it was made to a specific pattern for a pincushion, in which case we might find the pattern one day, but the knitter might equally well have put together the leaf and trellis stitch pattern, and a pattern for a knitted edging (of which there were lots).   Either way, it's a very fine piece of work.

A theme of my talk was that we can sometimes identify the pattern that was used to make a piece, and that this can either provide a 'story' for it, or add to the story that we already have.  And the fact that the collection has so many publications alongside all the knitted and crocheted items helps us match pieces with patterns.

Occasionally, finding the pattern that was used to make an item casts some doubt on its story.  A piece that has often featured in a trunk show is a tea-cloth with a filet crochet edging, which has 'Welcome Home' worked into each side. 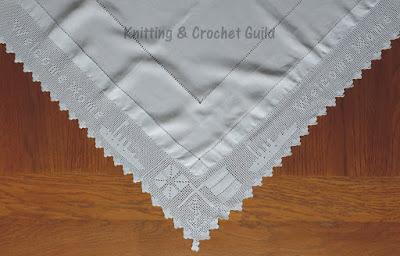 As the collection got more organised, it eventually turned out that there are three 'Welcome Home' tea-cloths, one of them with a detailed story.  It had been donated, along with a note of its history, by the daughter of the woman who made it.  The maker, Ethel Booth, was born in 1897, learnt to crochet at the age of 12, and made the tea-cloth for her father who was in the Army during the Boer War, "little knowing there would be the Great War".  That implied that the tea-cloth was made before the First World War (i.e. the Great War), but when I first saw it, before knowing this story, I was sure that it was a First World War design.  And in fact the story doesn't really hang together - the Boer War, or South African War, ended in 1902, before Ethel learnt to crochet.  And the First World War origin was confirmed when we found the pattern for the edging, in a magazine published in 1915.


The design is called 'L'Entente', and was presumably intended to celebrate the alliance between Britain and France, shown by the British and French flags in the corners.  (Though I must say that filet crochet in white cotton is really not ideal for representing red, white and blue flags.)  The design was evidently a popular one, and I'm sure that the appeal was nothing to do with the alliance, but rather the 'Welcome Home' message.  Someone at home could make it in the hope that their father, brother, sweetheart,.... would come home from the war.

All this happened before Ethel's daughter was born, and family stories often get slightly garbled in transmission, but she knew the final part of the story at first-hand, and I'm sure it's true: the last time the cloth was used was for Ethel's 90th birthday. 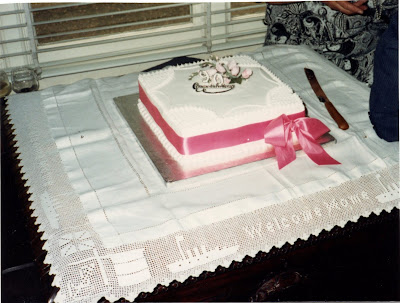 Another item I talked about at In The Loop came with no story at all - it was bought from a charity shop. 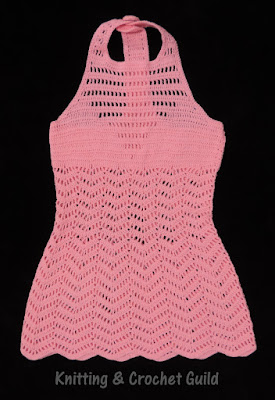 It is a remarkably short crocheted dress.  When I first saw it, I mentally labelled it as a beach dress, on the grounds that a beach would be the only possible place to wear it.  But then we found the pattern:


And it is not a beach dress at all.  The leaflets describes it thus: "Swingy little discotheque dress which longs to go dancing.  Prettily crocheted in a trendy yarn, with a short flirty skirt and a mini top."  (Did you know that 'disco' was originally short for 'discotheque'?  It's true.)

Because it’s a Patons pattern, and we have the Patons pattern leaflet archive in the collection, we have the master copy of this leaflet, that gives the original date of publication: October 1969.  The one I have shown is a later reissue from the early 1970s. 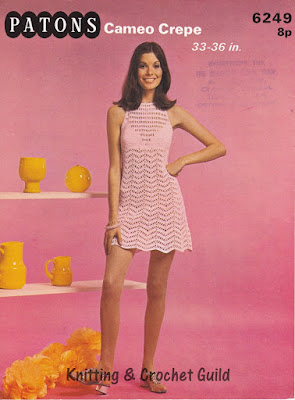 I'm not sure what you were supposed to wear underneath the dress.  The pattern calls for a pair of 'bra cups' to sew into the dress as a final stage in making up.  (Our dress doesn't have them.)  So you wouldn't need a separate bra.  But as the skirt is see-through (as well as very short) you would need underwear of some kind.  In fact, our dress is even shorter than the one shown in the leaflet - it has 5 fewer pattern repeats in the skirt.  Hopefully, the person who wore it was much shorter than the model.  Or else extremely daring.

Finding the published pattern to match our dress allows us to say a lot more about it than we could just from looking at it - we now have a story to go with it.  I finished my 'In the Loop' talk by showing a piece from the collection that is still in need of a story. 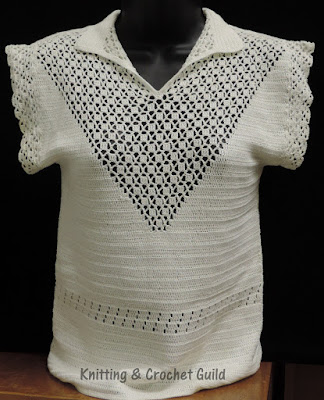 Like the pink disco dress, it was bought for the collection in a charity shop.  It is beautifully made in fine cotton.  But we don't know any more about it - it's difficult even to estimate when it was made.  If pushed, I would guess 1930s, but it seems too long for that date, or for the 1940s or 1950s.  And the work seems too fine for the 1960s or later.  It was very probably made to a published pattern and if so, we can hope to find the pattern one day - and then we will be able to give it an approximate date, and maybe say what it was intended for (a tennis shirt, I would guess).  So if you see a pattern for a shirt like this, please let us know - we would love to be able to include it in a trunk show and tell a story about it.

I'll say more about the Guild collection in future posts.
Posted by Barbara at 10:25