I got back on Saturday from the In the Loop at 10 conference at Winchester School of Art, home of the Knitting Reference Library.   "At 10", because the first In the Loop conference was held in 2008 (also in Winchester).

The conference was on Thursday and Friday, and I gave a talk on the Knitting & Crochet Guild collection on Thursday morning.  Unfortunately, most of the conference (except for the keynote talks) was in two parallel sessions.  At the same time as my talk, there was a talk on the Knitting Reference Library from Catherine Polley, the School of Art Librarian.  So a lot of people missed my talk, and I (and a lot of other people) missed Catherine's.  But the talks were recorded, we were told, and so hopefully we will be able to catch up with the talks we missed later.  (If that doesn't happen, I may post some of the content of my talk here.)

Because of the parallel sessions, I missed a lot of talks that I would have liked to hear.  (Alex Franklin's talk, for one, on 'Unravelling Miss Marple', i.e. Miss Marple's knitting as a reflection of her problem-solving and detective abilities.)  So I hope that the recordings will allow me to catch up later.  For now, here are a very few selected highlights.

Linda Newington, who has now retired to Shetland from the School of Art library, gave a keynote talk on the some of her favourite things from the Knitting Reference Library, and the history of the In the Loop conferences.

The second keynote talk was from Ingun Grimstad Klepp - an entertaining talk on the history of knitting in Norway and her work on promoting the use of Norwegian wool, and the role of wool in sustainability.  The history part of the talk was fascinating, with lots of images of Norwegians wearing their traditional knitted jacket (kofte) - keeping them, and wearing them, for years. She showed a familiar image - the Marius sweater, designed in 1953 and still very popular. 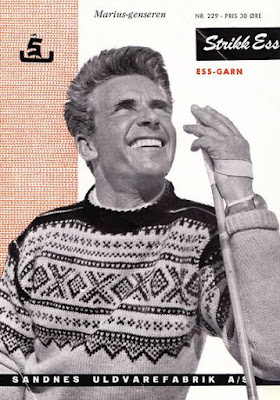 She also talked about sustainability and the importance of taking lifetime use into account when considering the impact of garments made from different fibres - a recent paper of hers on this work is 'Does use matter?'  Ingun is also leading the KRUS project to promote Norwegian wool.  A lot of wool is produced in Norway, from a lot of different sheep breeds, but there is also a lot of imported wool. (She pointed out that if yarn has to advertise itself with a Norwegian flag, it's probably not Norwegian wool.)

The third keynote talk was from Jessica Hemmings, who presented the work of artists who are using knitting to make challenge conventional ideas.  But also, she made some uncomfortable points about unconsciously adopting conventional ideas ourselves - she referred here to the talk by Lorna Hamilton-Brown, challenging the idea that "Black People Don't Knit".   And she pointed out the temptation for academic researchers to claim too much for knitting and other crafts - because if you make smaller, but more realistic, claims, that won't impress the academic world.

Below are mentions of a few of the other talks I heard, in random order.

Danielle Sprecher, curator of the University of Westminster Menswear Archive, presented some of the knitwear that has been collected.  Some designers have donated pieces from their own archive, such as Peter Jensen and his brontosaurus sweater, but Danielle said that a lot has been bought on eBay.

Freddie Robins talked about "Someone Else's Dream", a recent exhibition. She collected picture sweaters with designs of landscapes (on eBay), and Swiss darned onto them, to create a much more disturbing image.  One landscape featuring an isolated tree has the body of a man hanging from a branch.  Another sweater was knitted from a Woman's Weekly leaflet, before Freddie subverted it.

Here is the front of the very charming Woman's Weekly sweater:

Freddie also mentioned an earlier exhibition, Knitted Homes of Crime. She made knitted versions of the homes of female killers or the houses where they committed their crimes.  They are creepily like the knitted 'country cottage' tea cosies.

Clare Sams talked about her career as a textile artist, beginning with knitted panels based on scenes and events in Hackney.  I had seen one of her pieces before, at the Harrogate Knitting & Stitching Show in 2014 - a pigeon with a crisp packet.  She said that the pigeon is part of a much larger installation based on a pond near her home which looks idyllic and picturesque, but on close inspection also has litter, supermarket trolleys, rats,....

She described a recent piece she has done with her husband based on the enormous fatberg that was found in a London sewer - the piece was exhibited in Great Yarmouth at the end of last year, and reported in the local paper here.  A 9m. long tunnel represented the sewer, and strips of fabric the fatberg - no smell though.

I caught just the tail-end of Adrienne Sloane's talk on knitting and craftivism.  When I got there, she was talking about her piece The Unravelling, a knitted American flag that she is gradually unravelling.  Here's a YouTube video of Adrienne doing some of the unravelling (with a lot of background noise, unfortunately).

There were several talks on knitting history.  Jane Malcolm Davies who talked about the Knitting in Early Modern Europe https://kemeresearch.com/ research project which has built up an online collection of what Jane called 'cowpat caps' (because that's what they look like if they come from an archaeological site, i.e. have been buried for several hundred years). Similar caps feature in portraits of men like Erasmus and Luther - they were 'the headgear of choice for big brains', as Jane put it.   Creating the database has shown the need for an agreed terminology to describe knitted fabric - and sometimes the fabric is just a fragment rather than a complete garment, so there may be little clue about how it was made.  Terms such as purl, stitch, row or round describe the process of knitting, not the resulting fabric, so the project is instead using terms like loop, wale, course, ...

Sandy Black gave a talk on British designer knitters of the 1970s and 80s - from personal experience, as she was one of them.  I was a fan of Patricia Roberts' designs at the time, and was aware of a few other designers, too, and I remember that knitting seemed much more exciting then than previously. Sandy's insider knowledge gave a broader view, from someone who was making a living by designing and so knew the publishers, the spinners, fellow designers, ...

Frances Casey is researching knitting for the troops in the First World War, and disputes the view that the knitted comforts sent to troops at the Front were badly knitted and that too many were sent. She pointed out that this view is almost entirely based on Punch cartoons from the first few months of the war, and that by the end of 1915 the supply of knitted comforts was being organised to help to fill a huge demand.

Susan Strawn talked about 'Finding Virginia Woods Bellamy' - a woman who invented a modular knitting system and wrote a book about it, which is now almost unobtainable.  (Though many of her designs are listed in Ravelry.)  Susan has a copy of the book and has knitted many of the designs. They are very light, stretchy and resilient, and she produced about a dozen of them, one by one, from a tiny bag - like Mary Poppins' portmanteau.

It was a very full programme - there were a lot more talks that I could mention, and more that I hope to catch up on when the recordings become available.  I fitted in a visit to Winchester Cathedral, too, and paid my respects to Jane Austen, who is buried there,. And on the way home on Saturday, I spent a few hours in the British Library - but that's another story.