I recently found a copy of The Handknitter's Handbook by Montse Stanley in our local Oxfam shop (£3.99 - a bargain). I hadn't heard of it, but it is an excellent book,  that covers everything you can think of in amazing detail, and is also entertaining. (Not sure if it's still in print - it was first published in 1986, and later reissued as just The Knitter's Handbook. There is a book that seems to be doing a similar job by the same author called Simply Fabulous Knitting  - much shorter (164 pages v. 318), but definitely in print (and cheap too).)  Now that I am knitting again, I thought that I should go back to basics and make sure that I am doing things properly.

I've been casting on for years and years in the way I was originally taught, although at some time I adopted a variant of that method, and I have always considered that my method was just the way to do casting on. It turns out that there are dozens of casting-on methods listed in the Handbook - the method I use is called (by Montse Stanley anyway) cable cast-on, and she says of it: "A firm, cord-like edge. Not very elastic." Hmmm. She makes still more disparaging remarks about using cable cast-on with single rib: "It would be acceptable on aesthetic grounds if a definite edge was required, but functionally it is a disaster." I have been using a disastrous cast-on all this time! I didn't read this in time to use a different method for the back and fronts of my cardigan, but I have tried one for the sleeves. She says that alternate cable cast-on is better for single rib (and I think for moss stitch for the same reasons) and it does indeed give a neat and elastic edge. Essentially, while with cable cast-on you create a new stitch by knitting into the last stitch, with alternate cable you alternately knit and purl (and then on the first row, you knit where you created a stitch by knitting and purl otherwise).

As she says, cable makes a very definite edge of both sides of the work (though the two sides are different), and it is relatively inelastic;  with single rib, alternate cable is much less obvious and both sides look the same.  (For the samples, I used some nasty cheap acrylic yarn I bought at the yarn stall in the local covered market - £1.20 for 100 g./300m.  I bought it specifically for knitting samples and  I will never ever knit a garment in it.)

Montse Stanley is not entirely dismissive of cable cast-on - she lists it as a method for "ordinary edges".  My next project (a shoulder bag) has a cast-on edge to stocking stitch, so it will be fine for that, I think.

I've also been reading The Best of Vogue Knitting (borrrowed from the local library), a fascinating collection of articles from Vogue Knitting (American edition), published in 2007 to celebrate its 25th anniversary. 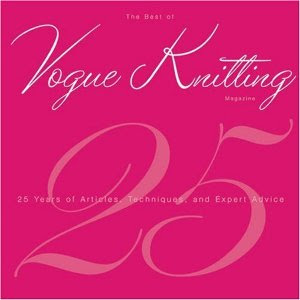 There are several articles on casting on, including one by Meg Swansen that describes both methods that I have used in the past as the two versions of Knitted-On Cast On. And I learnt something new from that article too. She says: "When you have achieved the wanted number of stitches, you may be displeased with the way the final cast-on stitch slants to the right on the needle and how the bottom of it merges with the penultimate stitch." Well frankly, I had never thought about it, but she's quite right: where you start casting on creates a nice right angled corner eventually, but the other end is rounded off rather than square. She suggests a simple remedy. Just before you put the last stitch that you cast on onto the left needle, you bring the yarn to the front (so that it emerges between the last two stitches). And it works! It's amazing how much there can be to learn about the simplest things.
Posted by Barbara at 10:52