We have several crocheted aprons in the Knitting & Crochet Guild collection - all quite similar in design, and presumably all the same vintage (1950s, I think).  Several of them have stripes of colour on an ecru background - the stripes emphasis the chevrons in the design. 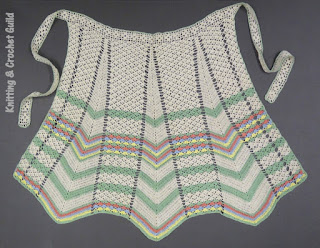 The white one is unusual (as far as the collection is concerned) in being just one colour, ... 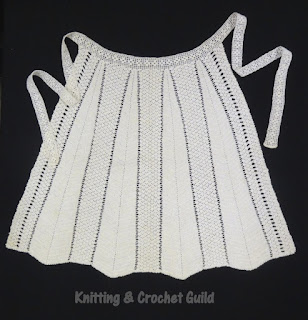 ...and we have one in a random-dyed crochet cotton. 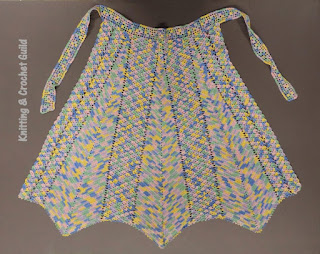 They are of course not much use in protecting your clothes from food spillages, which is what I use an apron for. But I think they were to wear when you had guests for afternoon tea - the apron was your badge of office as the hostess.

Aprons without bibs are technically known as half-aprons, apparently.   I think that even workaday aprons in the 1950s were half-aprons - my mother always wore one for housework and cooking. Personally, I think they pretty useless as a practical garment - if I spill anything it's generally on my top half.  I remember (I think) that in the late 1960s, the Habitat shop on Tottenham Court Road in London had butcher's aprons, in navy with white stripes, with bibs, and they seemed a great novelty - very practical, and just what the cool cook should be wearing.

However, back to our hostess aprons.  Being in charge of the publications in the collection, I've been trying to find a pattern for the aprons.  They look very similar, so I thought at first that they must have been made to the same pattern, only varying in the number and placement of stripes.  But in fact there are more differences  - the two coloured aprons look very similar indeed, but they are slightly different in detail.  So there must have been several similar patterns around in the 1950s, but I haven't been able to find any pattern that could be the original of one of our aprons.

I have found a few patterns for hostess aprons, but none of them match the actual aprons in the collection.


One of the aprons on the Arderns leaflet is quite like our aprons, though with a ribbon threaded through the waist band - but it's not a match.

Maybe aprons like ours were all made commercially?   That seems a bit unlikely - surely the 1950s housewife should make her own?  But if they were made at home, where are the patterns? If anyone  knows any more about these aprons, or knows of any patterns I've missed, I'd be delighted to hear about it.