On Thursday, we had the first Huddersfield KCG branch meeting of 2016.  The plan for the year is to tour the world in knitting, and we began the tour with a workshop on Bavarian Twisted Stitch patterns.  Marie had devised several small projects for us to try, from fairly simple to quite complicated - the end result of each is a phone case.

I had already knitted something using Bavarian Twisted Stitches, it turned out - the Baht 'At mittens from Ann Kingstone's Born and Bred book.   So I decided I should try the most complicated project - which was a bit daft.  I should know by now that in a workshop I'm not usually at my best - I'm not as careful as I should be, I make mistakes.  I should choose something simple. But I've done some more work since the workshop (corrected a couple of mistakes) and now I'm making better progress. 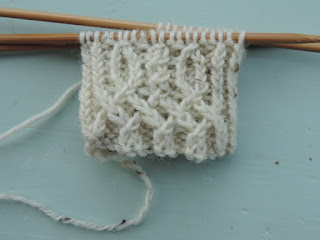 I did at least make the sensible decision not to attempt Judy's magic cast on - I've done it before, but I can't remember how to do it, and it would have taken most of the evening by itself.  So the bottom of the case is open, and I'll need to sew it up to finish it.

My stitches aren't as neat as they should be (having to correct mistakes doesn't help), but they are getting better, and twisting the stitches does have a remarkably neatening effect anyway.   Many of the Bavarian Twisted Stitch motifs have evocative names like "Clover Leaf" or "Ear of Wheat", but this one is apparently called "Large Chain with Twisted Bands".  So far I've done one pattern repeat, and I think it's looking good.

Next month's meeting is on British Ganseys, and further ahead I am doing a workshop on Swedish twined knitting.  At the time this was planned, I knew almost nothing about Swedish twined knitting, but some progress has been made - a friend has lent me a book on it, and I'm going to start practising.
Posted by Barbara at 10:15