Last week we were staying at Auchinleck House in Ayrshire, a historic country house restored by the Landmark Trust.  I suppose it's quite small by stately home standards, but it housed 13 of us (+ dog) very comfortably. 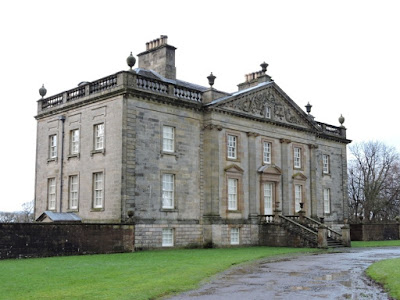 We deliberately chose last week because Monday was Burns Night - 25th January - so we had our Burns Night supper in grand Scottish surroundings. 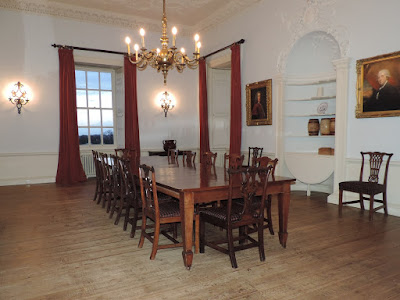 As is traditional, we had haggis, tatties, neeps and whisky sauce, followed by cranachan.  The haggis was piped in (though with an accordion rather than bagpipes) and Burns' poem Address to a Haggis was read while one of the party ceremoniously cut the haggis open.   Between courses, we recited Tam O' Shanter, taking turns to read a few verses each - not easy for the English, like me, who need a translation for lines like:


...ilka carlin swat and reekit,
And coost her duddies to the wark,
And linket at it in her sark!

After dinner we had more poems - William McGonagall as well as Burns.  And a certain amount of whisky was drunk.

The weather was fairly miserable the whole week - wet and windy, with occasional short sunny spells when the wind blew the clouds away.  But it was quite mild, so could have been much worse.  We went to Ayr and to Alloway, Burns' birthplace.  There you can visit the 'Robert Burns Birthplace Museum'; the Brig o' Doon; the old ruined church of Alloway, which features in Tam O' Shanter; the monument erected in memory of Burns; and the cottage where he was born.  (And for people who like that sort of thing, e.g. John, there are two exciting mort-safes inside the old church - used to protect newly-buried bodies from the anatomists.)

Until we went to Alloway, I hadn't known that Burns was so revered so early - he died in 1796, and the tradition of Burns suppers to remember him started only five years later.  The huge Burns monument in Alloway dates from 1820, and just below the monument is a collection of life-size stone sculptures of characters from the poem Tam O' Shanter, which were created in 1828. 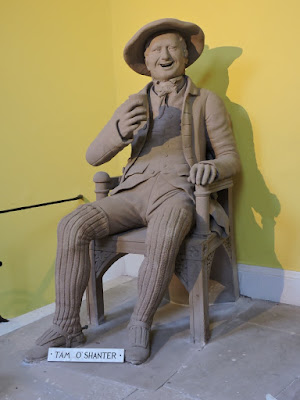 Tam O' Shanter is, of course, wearing the 'guid blue bonnet' mentioned in the poem - and a pair of knitted leggings, too.  I wondered when tam o' shanter became applied to a particular style of head-gear. Again, it was surprisingly early: in the 1830s, Tam O' Shanter bonnets were advertised in Scottish newspapers as a type of headgear - specifically for men at that time.

Back to Auchinleck.  Because of the weather, and the fact that it was getting dark by 4 in the afternoon, we spent a lot of time in the house. That was no hardship - it allowed us to enjoy the house and the company of friends.  The house was built for the father of James Boswell, the friend and biographer of Samuel Johnson.  The Landmark Trust has put a collection of books relating to Johnson and Boswell in the library - another grand but very comfortable room, with open fires at each end, and a pleasant place to sit and read (or knit).

I don't think I have ever looked at a copy of Johnson's Dictionary before, so I decided  to see what he says about knitting.   He defines 'to knit' as 'to weave without a loom', so I don't think he was a knitter.  But the entry for 'knitting needle' is interesting - Johnson's was the first English dictionary to use quotations to illustrate the use of words.  For knitting needle, he gives: "He gave her a cuff on the ear, she would prick him with her knitting needle."  It makes you wonder what the rest of this scene of domestic discord involved.  The Oxford English Dictionary (which adopted the idea of using quotations) uses the same quote, and dates it to 1712. 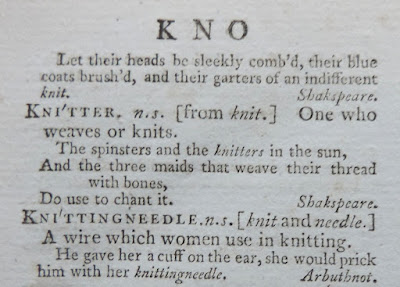 And I did some knitting, by the fire in the library or at the dining table after dinner.  I mentioned in my last post that I need to practise Swedish twined knitting for a workshop in a few months' time.  Last week I had a go, and knitted a little sampler of different stitches. 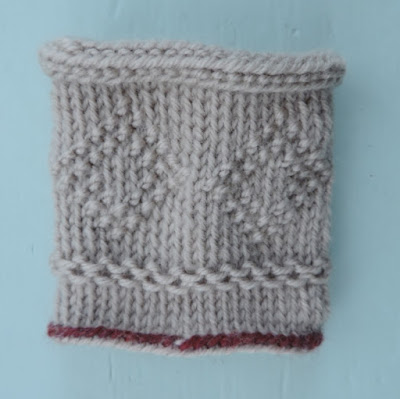 It's turned out very well, I think.  Amazingly, it's very like the illustrations in the book!  I was using two strands of the putty-coloured yarn (apart from the casting on where I used a bit of another colour).  The inside is also very neat - you can see how the two strands of yarn are twisted over each other. . 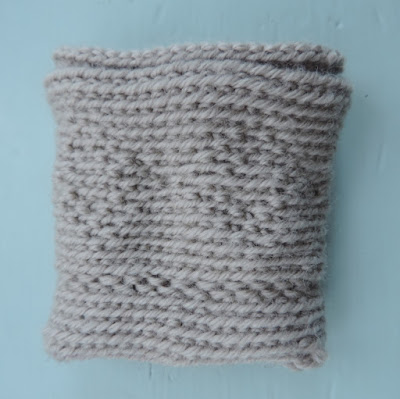 I do need to practise some more, but I'm really pleased that I've managed to produce something that looks like it's supposed to.

It was a very good week altogether - awful weather, but a beautiful and comfortable place to stay, and good company.