Last weekend, I went to Blackpool for a knitting weekend with eight friends from the Huddersfield branch of the Knitting & Crochet Guild.  It was great - we had a wonderful time.   Lots of knitting , lots of chatting,  and we were really well looked after by Paula Chew at the Westcliffe Hotel.   (Not to be confused with the Westcliff Hotel, Blackpool, which proclaims "we welcome stag and hen parties".)

Paula runs knitting holidays where she provides workshops, yarn shopping trips and other knitty activities, but we did our own workshops.  Marie led a workshop on brioche knitting (a re-run of the one she did at the Guild Convention in July, since none of the rest of us had been to that one).  We worked through a small brioche project - either a cup-holder or a wrist-warmer.  Mine's going to be a wrist-warmer.


Margaret taught us how to do entrelac, which I have not tried before. The project Margaret set us was a small pouch (for stitch holders, or whatever), though I haven't got mine finished.  I'm glad to have tried entrelac - I hadn't realised before that the individual rectangles are not square.  In the pattern we were following, they are 10 stitches by 10 rows, but stocking stitch is wider than it is long.  So the woven effect is partly because the rectangles don't want to lie flat.  Not a very profound observation, but something I didn't know until I tried it.


I did the third workshop, on slip-stitch patterns.  I had swatches of 8 or 9 stitch patterns, some in just one colour and some in two colours, swapping after every two rows, so that people could try any that they liked the look of. I had borrowed a linen stitch scarf from my friend Steph, with the colour changing every row, which looks wonderful. But although linen stitch can look very good, it is a lot of work - it is very compact and dense.


I also took my Old Moor sweater that I knitted four years ago, to show the bands of Woven Transverse Herringbone - another stitch that is a lot of work, but can look very good.


Some of the other stitch patterns I had found give a lovely thick soft fabric, and there are some nice effects in two colours.  Marie made a little bag (for her car keys?) in Slip Stitch Honeycomb - a very pretty pattern in two colours.


Slip-Stitch Honeycomb is one of my favourites, too - I wrote last week  about a test piece for a cushion, which in fact uses both sides of the stitch pattern.   One side looks better in two colours, but the other side looks better if you're only using one.  And I've made a lot of progress with the full-size cushion:


So we sat in Paula's lounge and knitted and chatted and were offered tea, coffee and food regularly.  And there are current knitting magazines to read, and knitting books everywhere. And Paula has a little shop at the front of the hotel, so that if you haven't got the right needles or need some nicer ones, or run out of yarn, they are right there for you.  (Four members of the party spent a lot of time discussing the Opal Yarns Advent Calendar in the shop, and finally devised an incredibly complicated way of sharing it, involving drawing lots for the individual days, setting up a Facebook group, and rendez-vous every week during December to pass it on.)

And to get the full sea-side experience, Paula sent us off to a fish-and-chip restaurant on Saturday night, Seniors in Thornton, which won "Best Fish and Chip Shop in the U.K." in 2012.   (I don't actually like fish-and-chips, but it does other fish dishes too which are very good.)

We didn't see very much of the sea, although the sea front is only 100 yards from the Westcliffe, but I did go for a walk along the promenade on Friday afternoon, and set foot on the beach - if you 're at the sea-side, you ought to go on the beach if you can.  It was almost empty, apart from a man fishing at the water's edge. 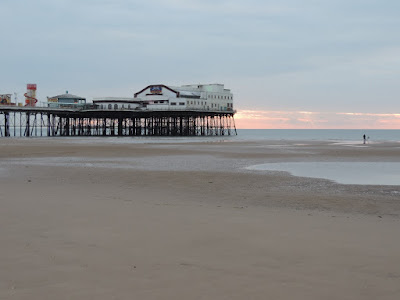 And of course, the Blackpool Illuminations were on.  They have been an annual event for a long, long time - I remember seeing them when  I was a child.  There are 6 miles of them along the sea front, though I only saw a short stretch near the hotel, with some of the tableaux  - moving images made by light bulbs going on and off.  Some of them seem similar in style to the ones I saw decades ago, though I remember them being all in white, rather than colour. 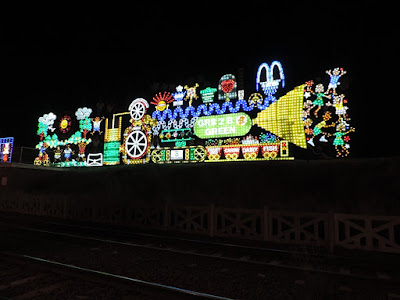 The Blackpool trams run along the sea-front, next to the tableaux, and one or two of the trams are also illuminated.


It's a very popular event  - quite odd, in these days of amazing CGI effects.  There are slow-moving cars driving along the promenade all evening, as well as people in the trams and walking.  (Although most of our party preferred to stay in the hotel with a bottle of wine, knitting.)


Altogether, it was a really good weekend.  We are already planning next year's Knitway at the Westcliffe.  Thanks very much, Paula.
Posted by Barbara at 11:37