Stitchcraft was a monthly magazine published by Patons & Baldwins that first appeared in October 1932.  In the first few years, the magazine had a Paris correspondent, Ann Talbot, who wrote every month about the hand-knitting and crochet in the models designed by the Paris fashion houses. (Not just sweaters and accessories - evidently a lot of the dresses were hand-knitted in the 1930s.)  I have been looking through her articles in the early issues of Stitchcraft in the Guild collection, for a piece I am writing for the Guild magazine.  In the May 1933 issue, a paragraph  on what Ann Talbot calls cotton-reel knitting caught my eye - it's what I used to call French knitting and we now call i-cord:


Old-fashioned tubular cotton-reel "knitting" is being enthusiastically revived in Paris at the moment. Charming accents of colour are achieved by trimming with this original handwork. Quite a brisk, military air is given to a navy woollen frock by the epaulette trimming of two rows of cotton-reel tubing, one red, the other white, along the top of each shoulder. Wool fringe in red and white is frayed out at each outer end of the tubes. Cuffs and necklines are effectively trimmed in this way, and belts of varying widths, depending upon the diameter and number of tubes used, give an unusual touch to sport coats and frocks. Striped and plaid effects are frequently worked into a tube, for both stripes and plaids are very much to the fore in the new collections.

And here is Ann Talbot's drawing of two of the outfits, including the frock with epaulettes that she describes: 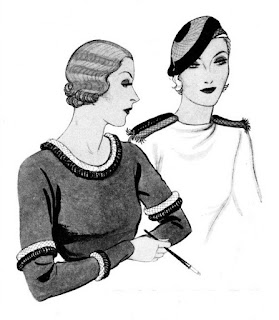 I think that the two rows of tubing above the elbow look a bit daft, actually, but never mind.

I explained here how we used to do French knitting using a cotton reel.  It's interesting that Ann Talbot calls it old-fashioned - and I wonder when it started to be called French knitting.  I-cord, which is instead knitted on a pair of double-pointed needles, produces the same effect (more quickly). Elizabeth Zimmermann gave it the name i-cord (for idiot cord, because it is easy to do).  She always claimed to have 'unvented' or re-discovered any apparently new technique (not because she knew of an earlier source, I think, but because she thought that it was impossible to invent an entirely new idea in knitting).   Several websites suggest that she did invent the technique of producing a cord on two needles, but Jean Greenhowe tracked down an early description in a book printed in 1856, in an account of how to knit stay-laces - see here.  So EZ did unvent the i-cord technique, rather than inventing it.

Anyway, back to Paris in the 1930s.  I imagine that the cords decorating the two models illustrated are sewn in place.  These days, if we used i-cord around a neckline, it would more likely be knitted in place, e.g. by picking up stitches around the edge and knitting them into the i-cord.   For instance, Ann Kingstone's Wetwang sweater has applied i-cord at the top and bottom edges of the yoke.   In  spite of Elizabeth Zimmermann's nothing-new-in-knitting theory, I do suspect that someone invented applied i-cord, fairly recently - don't know who or when though. Any information gratefully received.
Posted by Barbara at 10:50