This has been a busy week, including two days at the Knitting & Crochet Guild store, working on sorting out the magazines, and more work on them at home. The main store is currently more or less empty - most of the items that were not water damaged by the burst pipe just after Christmas have been moved out, so that the building can be dried out. But that is nearly done.  The dehumidifiers are about to be removed and the contents will be moved back shortly - there's a lot of work still to be done. So no blog posts this week. I know that lots of people work full-time and still manage to write their blogs - I just don't know how, that's all. 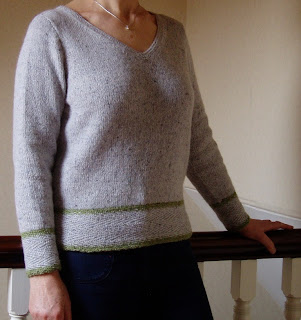 But I have also managed to finish my Old Moor jumper. It had its first outing on Tuesday at Knit Night. I'm very pleased with it - it fits well and the tweedy yarn looks good in the herringbone stitch and the stocking stitch too.  I like the way the neckline is shaped and finished off - the edging is just a few rows of garter stitch, but it all looks very tailored and neat.  I worked the shoulder seams using short row shaping and Russian grafting, of course - practise what you preach.  And I am very proud of the neatness of the armhole seams.  Those were the only seams I had to sew, as I knitted the body and sleeves in the round. 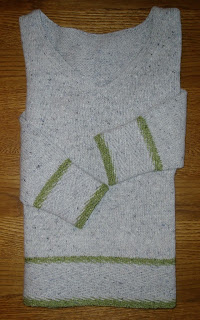 I made some changes to the pattern that I didn't mention before.  It is supposed to have a V-neck  at the back as well as the front, but I don't like having a draught down the back of my neck so I filled it in.  Also, the yarn is not soft enough to wear next to the skin, so  I will be wearing another layer underneath (except for modelling purposes) and a V at the back would make that difficult.

Another change is that I reduced the diameter of the cuff, because I wanted it to be close-fitting.  The herringbone stitch is not at all stretchy, so it is now quite a tight fit over my hand.  The pattern has a looser cuff and then a wider sleeve, but I have staged the sleeve increases evenly so that the sleeve is a closer fit overall - I thought that a loose cuff and sleeve would just be very annoying.

I have started another project to replace this.  It is a lacy scarf in Kid Silk Haze, for a friend who is 60 in April. She asked for a sort of plum/damson/berry red colour, so I am using Liqueur - a lovely rich dark red.  And now I shan't say any more about it until after her birthday.
Posted by Barbara at 20:58