This post is quite a technical one about knitting, so for any non-knitters who happen to see this - I wouldn't bother reading it.

I recently borrowed a copy of The Principles of Knitting, by June Hemmons Hiatt - a wonderful book.  I learnt such a lot from it, even about simple things that I thought I knew all about. It's unfortunately out of print and secondhand copies are very expensive - I have heard that Simon and Schuster, who published it, have been planning to reissue it, and I wish they would.   It is so useful - she has thought about every little detail involved in knitting, from the basic principles onwards. One of the many, many things that have caught my attention in the book is in the chapter on short rows, where she says that one application of short rows is to make the slope for a shoulder seam, and that it gives a much smoother line than the usual method of casting off in stages.  That seemed an intriguing idea so I have knitted a sample to try it out.

I'm going to describe the technique here, mainly for my own future benefit - I shall forget if I don't write it down. It might be useful to other people too, though of course it's easy to find tutorials on short rows.

I knitted a small sample with 21 stitches, and I'm pretending that the left edge is the armhole edge and the right edge is the neck edge.

Using short rows, we start shaping instead at the neck edge, and knit the first 7 stitches. Then we turn, without knitting the rest of the row. To avoid creating a hole between the 7th and 8th stitches, I use the wrapped method, as described by Hiatt. The yarn is taken round the 8th (unworked) stitch before turning the work to purl the 7 stitches at the neck edge. 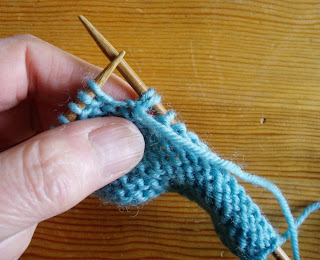 Once the work is turned, the first purl stitch should be pulled tightly so that it is as close as possible to the wrapped stitch. 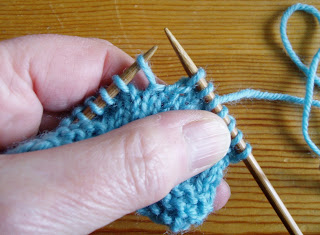 Then purl to the end of the row (the neck edge) and turn to work the next (knit) row.  This time, I am going to knit the first 14 stitches.  But I need to do something about the loop of yarn that is still wrapped around the 8th stitch. 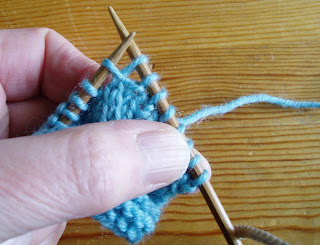 The aim is to hide the extra loop on the inside of the work.  It will be treated as an extra stitch that will be eliminated by a decrease. The 8th stitch is slipped temporarily onto the right needle, and the wrap loop is picked up with the left needle. 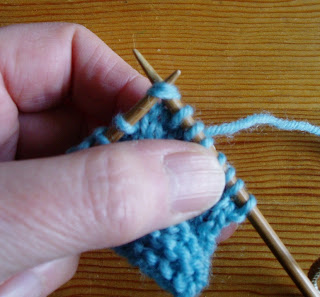 
On this row, I turn after knitting 14 stitches, again wrapping the yarn around the next (15th) stitch to avoid leaving a hole, and then turn to purl these 14 stitches. Finally, the next (knit) row is worked over all 21 stitches, again dealing with the loop of wrapped yarn by picking it up and hiding it on the inside of the work. The final result is that since the start of the shoulder shaping,  I have worked 1 row over the leftmost 7 stitches, 3 rows over the middle 7, and 5 rows over the rightmost 7.   So this is an equivalent slope to the casting-off-in-stages method, but much smoother (and of course, I haven't yet cast off). The places where I turned after working part of the row are hardly visible. 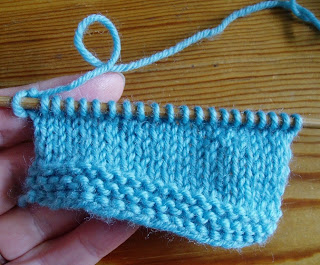 The corresponding shoulder slope that will be joined to this one is done in much the same way except that the wrapping and  subsequent picking up of the wrap loop are both done on a purl row.  To hide the wrap loop on the inside, the wrapped stitch has to be twisted first by slipping it knitwise, and then the loop and the stitch are purled together through the backs of the loops.  ( I can't remember all that  - I just stare at the two stitches that have to be purled together and think about which one has to be in front and then work out how to do it. Sometimes by trial and error. Of course, if you were doing reverse stocking stitch, you would want to hide the wraps on the 'knit' side, so the number of variant rules in quite large.)

Finally, we have two smooth shoulder slopes to be seamed together somehow.   Of course, you could cast off, front and back, and sew the two pieces together, and the result would be neater than the usual method. But why do that?  Much better to either cast them both off together, using what Hiatt calls a joinery cast-off, or to join them by grafting. Since I found out about Russian grafting, I have been using that technique whenever I can, so I'm going to use it to join my shoulder seams. I'll write about that in the next post, because the way I do it is slightly different to the method in the tutorials I have seen.
Posted by Barbara at 14:45