Last weekend we were visiting friends in London. We went by train and I got quite a lot of knitting done, going there and back, and on the train from our friends' house into central London over the weekend. I was working on the scarf I am making in Kid Silk Haze for a birthday present - I started on the second ball (of two) over the weekend, so it is going well. 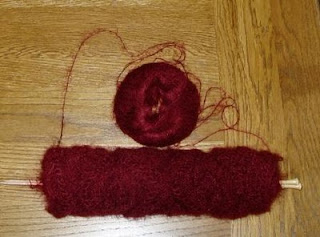 We had a very cultural weekend, visiting museums and art galleries, as well as two cemeteries. (J likes cemeteries a lot, though it was a very cold weekend and walking slowly round a cemetery is really not a good way to keep warm.) 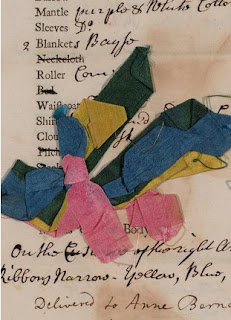 We visited the museum in the Foundling Hospital, set up in the 18th century to take in abandoned babies. There are many other things of interest in the museum,  but the main attraction just now is the Threads of Feeling exhibition (running until March 6th).  When a child was taken into the Hospital,  it was given a new name, but the hospital wanted to provide for the possibility that the mother might one day be able to look after her child and come back to reclaim it. (In reality, that very rarely happened.)   So the Hospital recorded what the child was dressed in, and sometimes pinned to the record a sample of the cloth - or sometimes the mother attached a knot of ribbons, or some other token, to distinguish her child. The fabric samples are apparently very important as the best surviving evidence for the type of cloth that ordinary poor people wore at that time, but mainly when you see the exhibition you think of the people involved, and how hard it must have been for the mothers to give up their children. It is very touching to see the records and the scraps of cloth. (A good article on the exhibition was published in The Guardian.)

The same day, we also went to the Wellcome Collection, which is a free museum containing an extremely  diverse collection of objects to do with  medicine, anatomy and more or less anything to do with being human, I'd say. Or to quote the web site "it explores the connections between medicine, life and art in the past, present and future".  It is very peculiar.

And (on another day) we were going to visit Westminster Abbey but were put off by the long queue, and the fact that photography is not allowed. Why not? I can understand that lots of people taking flash photographs would be annoying for other visitors, but why is photography without flash banned? They say in mitigation that "Postcards showing the interior of the Abbey are available to buy in the Abbey shop", but in fact there is only a small selection. 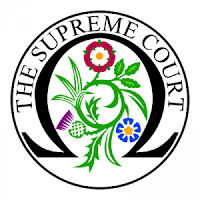 So instead we went to see our new Supreme Court, just across the road.  (The building isn't new - it's been recycled from the former Middlesex Guildhall, a neo-gothic, early 20th century building, but the institution is.) Entry is free and the staff were all very friendly. There was a case in progress, and we picked up an information sheet about it - it was an incomprehensible matter to do with tax. Slightly disappointing that it wasn't some important human rights matter, but it was still impressive to see the court in action and gratifying that any member of the public can see knotty points of law being worked out in accordance with our constitution. (Even though we haven't got one.)

From there we went to the Courtauld Institute Gallery, which has a wonderful collection of Impressionist and Post Impressionist paintings, amongst others.  As usual, we all picked the ones we'd like to take home with us. I chose a Monet of the river at Argenteuil, all orange and blue, and a Cezanne of trees near his family home in the South of France.  The leaves are painted with short parallel brush strokes, which give a really lively effect of a breeze blowing through the branches.  I was going to buy a postcard of it, but its character is completely lost on such a small scale. I was also taken by some William Nicholson linocuts, and the shop had a print of one of them.  I bought that, in lieu of the original Monet and Cezanne.  Easier to live with, probably.

And we took the bus several times - a splendid way to see London, especially from the front of the top deck.   Altogether we had a great weekend, and it was really good to spend time with our friends.
Posted by Barbara at 21:08

Labels: holiday, in progress, not knitting