I came across Russian Grafting in a post by Fiona on her blog and it immediately struck me as a really neat way of joining two pieces of knitting.  I have seen a couple of other tutorials too, since then: for instance, there are two on YouTube, one here that uses a crochet hook, and another here that uses a pair of knitting needles, as in Fiona's tutorial. When I tried following Fiona's tutorial, it seemed to me that the method could be simplified a bit. With the existing methods that I have seen that use a pair of knitting needles, you have to pull one stitch through another, which I find a bit awkward - the advantage (if you think it is an advantage) is that most of the work is done by the right needle.  If you are happy to work with the left needle on stitches that are on the right needle, as well as v.v., I think the method I describe here is simpler.

So suppose you have two pieces of knitting to join together, with the same number of stitches in each. (My two pieces are the samples I was using to practise sloping shoulders in my last post.) You first need to arrange them on the needles so that the  free ends of yarn are at the outside edges, away from the needle points.  (Strictly, you only need one of the yarn ends to be there.)  Because of the free ends, the last stitches on the needles can get very loose as you are working, so I think it is helpful to prevent that by making a slip-knot in each free end, as close as possible to the last stitch. 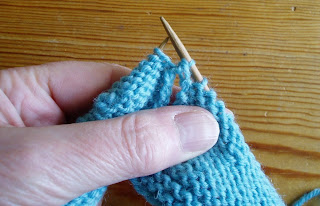 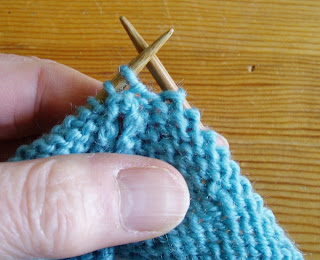 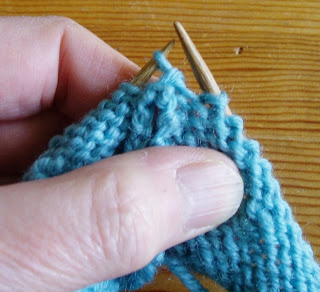 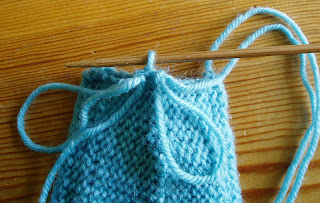 Repeat these two steps until only one stitch is left. 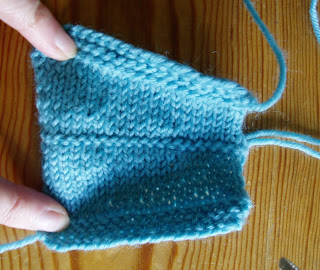 Then undo the slip-knots and secure the graft by threading one or both free ends of yarn through the final stitch. And the graft, finally, is a neat row of zigzagging, interlocking stitches. 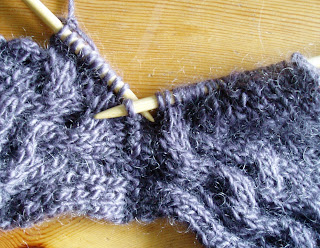 You can see that in the shoulder seam of a cardigan I am just finishing, and will write about later. The complete graft is again very neat, I think. 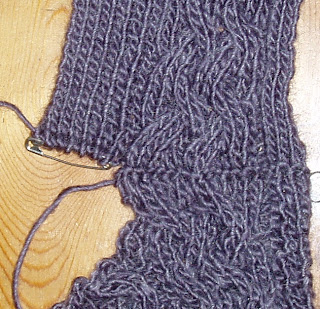 (The rest of it is not very neat yet - I'm knitting a built-in button band, that is not yet finished.)

I'm really converted to Russian grafting - it gives very good results on many different stitch patterns.  I used it to join together the two halves of the moss stitch collar on my Textured Cardigan. It's much easier than grafting using Kitchener stitch, which I think would be quite tricky on moss stitch. The seam is not at all bulky or stiff, like a sewn seam can be. And you don't need to worry about getting the right tension - it's all taken care of by the knitting you have already done. 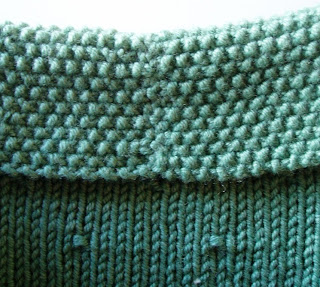 Following my last post, minniemoll commented that she had tried grafting shoulder seams, but found that the join wasn't strong enough and so the sleeves stretched under their own weight. I can imagine that that would happen with Kitchener stitch grafting, because it is meant to look and behave exactly like another row of knitting. Russian grafting won't be so elastic, I think. Anyway I shall try it in the cardigan I am finishing, and report back.
Posted by Barbara at 16:37