My textured jacket from Classic Knits for Real Women has been finished for a while.  I have worn it several times and before that it was hanging around (literally) for a week or so, waiting for me to sew it together. So I should write about it.  It's proved quite difficult to get good photos of it that show its proper rich green colour - often, the photos show it as a washed out grey-blue. 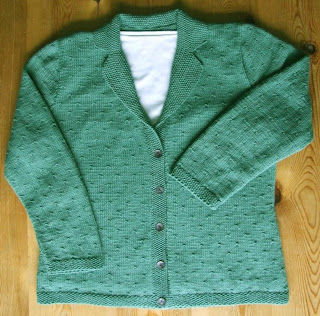 It's nice to wear - soft, not too warm,  just right for autumn weather.  And I like the collar.  I must admit that knitting all that moss stitch got rather tedious, but it was worthwhile in the end.

I made a couple of minor changes  to the pattern.  I made the purl stitches closer together (every 8th stitch instead of evey 10th stitch) so that they are the same distance apart horizontally and vertically.  And there are supposed to be 6 buttons rather than 5  - in fact I made 6 buttonholes, but then decided that the top button wouldn't look good,  given the way that the collar lies. Fortunately, the extra buttonhole is hidden behind the fold of the collar.  In hindsight, I should have attached  the left buttonband and collar to see where to place the buttons, before starting to knit the right buttonband, rather than just putting the buttonholes where I was told.    I'll remember that in future. 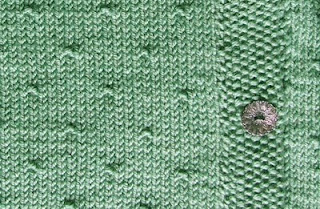 It has turned out rather larger than I anticipated - not really sure why.  I knit the smallest size (36 in.) and although there was quite a lot of ease built into the pattern, it has turned out even wider.  I checked my tension and it still seems to be OK, so it's a mystery.  Still, it's fine - a bit roomy, but fine.
Another puzzle is that I have quite a lot of yarn left over.  I used Rowan wool-cotton rather than the recommended  yarn, but they are both DK weight, and I calculated the yardage and then the number of balls I needed.  I bought 15 balls and have 4 left over, plus some oddments.  That's a big discrepancy (and it's not my calculations that are wrong, I'm sure) - and annoying, given the price of good yarn.
Posted by Barbara at 13:45