I have an old hand-knitted jumper of my mother's that I have kept because of all the time and effort that  clearly went into it.  I recently realised that I also have the pattern for it.  It is in a book that she was given  for her birthday in 1947, Practical Family Knitting Illustrated, by Margaret Murray and Jane Koster.

The caption is: "Here is a lightweight jumper that is delightful to wear under a tailored suit.  The ribbed effect of the open-work panels and the cable stitch produces a slim-fitting line, while the scalloped edging gives an attractive finish to the waist and short sleeves."

The photo looks very 1940s, mainly because of the very square shoulders, but they are at least partly due to shoulder pads.  (And if you wore the jumper under a suit as suggested, with a coat on top if it was winter-time, you could easily be wearing a stack of three shoulder pads on each side.  I  remember that from the 1980s, when shoulder pads were again commonly worn.  Bad idea.)


Mother's version has a more natural shoulder line.  I'm not sure if she adjusted the shaping at the top of the sleeve, or whether it's just the lack of shoulder pads.  She did change the pattern to make the jumper bigger - the instructions in the book are only for a 34 in. bust size, and she inserted an extra cable and lace panel, front and back, and made the neck opening larger at the same time. 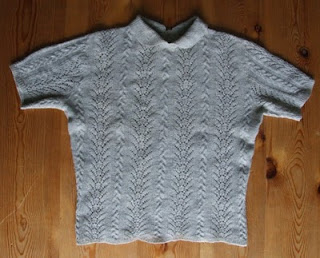 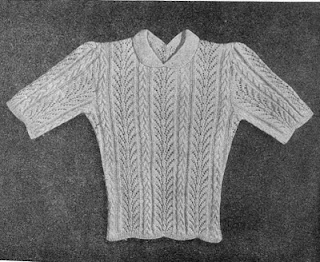 It is a very pretty stitch pattern.  The lace part is called Fountain Lace in one of  Barbara Walker's   Treasury of Knitting Patterns books, apparently - I guess it is a traditional pattern. 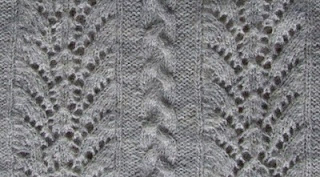 I don't remember Mother wearing it, but it is well-worn.  I think you would probably keep a jumper like that even if you were no longer wearing it - it must have been quite time-consuming to make.  My sister thinks that she knitted it around about 1980, when she acquired some very fine knitting wool from somewhere. At that time she mostly did simpler knitting that she could do while reading or watching TV in the evenings, with her feet up on the sofa.

In fact, there are quite a few mistakes in both the lace and the cables, if you examine it closely.  I think that's partly because the book doesn't give charts.  Whoever invented knitting charts did a great service to knitters. (Although Mary Thomas used charts in her 1943 Book of Knitting Patterns, so they seem to have already been invented before Practical Family Knitting Illustrated was published.)    I have knitted a test swatch and it is very difficult to follow instructions like:

spread over several lines like that.  Even worse when the page with the colour photo comes in the middle of the instructions for the row.  Evidently, Mother didn't copy out the instructions but worked from the book - there is a large tea stain on the first page; the colour photo page has fallen out, been taped back in and fallen out again; and the spine is giving way at that point in the book.  "Well-thumbed" doesn't really do justice to the amount of wear this poor book has had.

But as a birthday present it was very successful - Mother used it over many years, and I still have it.  I'm sure that this pattern could be updated to be wearable today and I plan to do it. My mother's friend who gave her the book later became my godmother, and re-knitting Mother's jumper seems a good way of remembering her as well.
Posted by Barbara at 17:55