In an earlier post,  I described seeing Steve Plummer knitting Girl with a Pearl Earring  using Illusion Knitting.  There was a follow-up post  by Knitting Before Knitting was Cool on her blog, which mentioned Vivian Høxbro's book, Shadow Knitting.   Same technique, different name.   Her book has some very desirable cardigans, with stripes and other simple geometrical shapes appearing and disappearing, as you move.  In a good colour combination, they look very attractive.

I found it very hard to grasp how shadow knitting/ illusion knitting works, either  from seeing Steve Plummer's handiwork, or from the description in  Høxbro's book. (Though her account makes perfect sense now that I do understand it, so I cannot blame  her description.)  The only thing to do was to try it, so I chose one of the smallest pieces in the book, a small bag with a heart shape on each side.  The pink/orange yarn is left over from my Zigzag top; the contrast yarn is plain navy blue. 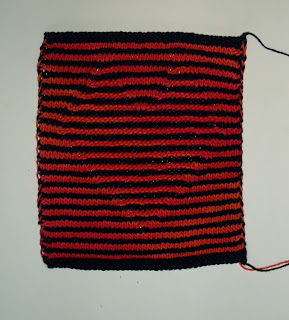 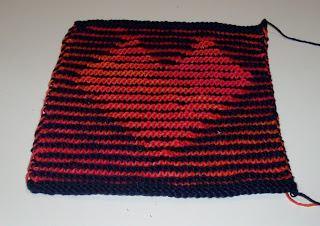 I knit the first side on a hot and crowded train journey to Scotland a couple of weeks ago, and was grateful for the distraction.  I made a couple of changes to the pattern.  The original has a different pair of colours for the top and bottom half of each side of the bag, but that seems to me unnecessarily fussy for such a small piece.  And the heart is outlined in buttons (the pattern is called "Button Heart Bag", in fact), but I think that would spoil the effect of only being able to see the heart clearly from some angles.
Last weekend, we visited friends whom we have not seen for years, and had a lovely weekend even though it rained.  (A lot.)  Christine is a knitter and knows the Shadow Knitting book and has knitted one of the sweaters for her husband, who modelled it for me.    The shadow stripe effect is very subtle in that pattern, maybe too subtle.  Because the garter stitch ridges are horizontal, the stripes are not very  visible except on the shoulders, where you are looking across the rows, though that's not so clear from the photo in the book.  We decided that it would be preferable to have the ridges running vertically. The cardigans I like best are like that, in fact; they are knitted sideways from cuff to cuff.