On Saturday, the UK Knitting and Crochet Guild had an Open Day at their base at Scholes, near Holmfirth.  I went along to see what was going on.  J. had the car for the day, so I got the bus from Huddersfield to Scholes (with my free bus pass). Scholes is a small place in the hilly country above Holmfirth and I would not like to be a bus driver taking a double-decker bus along some of the narrow, steep, winding lanes that the bus route follows.

I had a wonderful day.  The Guild is selling off duplicates from their library and I got several books published between the 1930s and the 1980s, which I may write about in a later post.  There was a talk about the Guild's collection of vintage knitted and/or crocheted garments by Liz Gillett, who looks after the collection. Some of the garments are very old, and need to be protected from too much handling, so we all wore white cotton gloves to examine some items that Liz had brought out to show us.  There were several amazingly intricate examples of crocheted lace, some horrible knitted swimsuits (knitted swimsuits are just inherently horrible, no matter what they look like),  and some more recent items, such as a Patricia Roberts jumper (which I have the pattern for, and remember when it was new and exciting) - many other fascinating things too.

There was a display elsewhere in the building of more items from the collection.  One room featured modern designers such as Elizabeth Zimmerman. This room had some knitwear designed (and in one case made) by Kaffe Fassett, that he gave to the Guild. It was fascinating to see actual garments rather than just photographs in books. 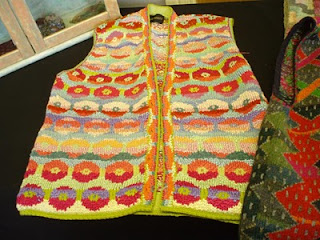 Another room showed underwear (which made me glad of Marks and Spencers and modern heating).


I met lots of people during the day, including Pat Ashforth and Steve Plummer of Woolly Thoughts.  By coincidence I had come across their  Illusion Knitting web page only the day before (following a link from Ann Kingstone's blog). Illusion knits look like a striped piece of garter stitch when you look at them straight on, but when you look from an oblique angle, a picture emerges. So when I saw Steve knitting a striped piece of garter stitch, I guessed immediately that it was an illusion knit.  Odd to recognise the knitting and not the knitter.   The picture he was knitting was Girl with a Pearl Earring (though rather a long way after Vermeer, of course, being in only two colours and stripy).  It is an amazing technique - the picture is just not visible until you view it at the right angle, and then it becomes very obvious.  But it disappears again when you go back to looking straight on - it is not like an optical illusion where your brain is being fooled and you can persuade it not to be.  Very intriguing. 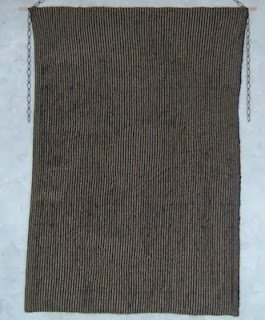 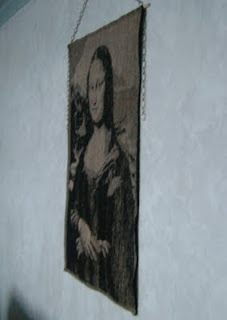 It reminds me a bit of Bob Bosch's work - he teaches at Oberlin College in the US and uses maths to create art.  One strand of that is Domino Art, using double-nine dominoes to create pixellated pictures, e.g. the Mona Lisa.

The Knitting and Crochet Guild also sells yarn (and other things) through its trading company, and although I didn't  intend to buy any, some of it was so lovely that I couldn't resist.  It is Fiddlesticks lace weight in a silk/merino blend.    The colour is beautiful and rich - a sort of dark blueberry colour, I would say.   I have a vague idea of what I might use it for - until then, I will just enjoy how fantastically soft it is. 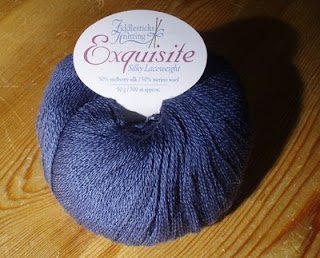