At the Knitting & Crochet Guild convention a month ago, one of the members donated a little holder for a ball of crochet cotton to the Guild collection.


To give it its proper name, it's a Crochet Cotton Casket - a metal box, beautifully decorated, which separates into two halves in the middle, and has a hole in the top for the cotton thread to emerge from. 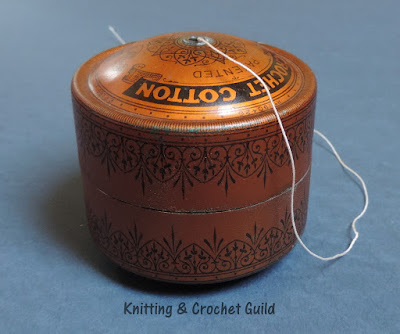 It says on the top that it's patented (though I can't find a patent) and registered - that is, the design was registered, and in fact it has two registration numbers on the top, 189723 and 190426, which are both 1892 registrations.  (Though our box could have been made later than that.)  The box itself is a very functional design that could easily be used now - the size and shape of balls of crochet cotton seem not to have changed much for well over a hundred years.

There is also a manufacturer's name on the box - Jahncke.  Information from the National Archives website is that the company made tin boxes at Canonbury Works, Dorset Street, Islington (London).  It was founded in 1873 by Ernest Jahncke.

I remembered when I saw the name that there is another metal container made by Jahncke in the collection - a knitting pin case, the Mitrailleuse.  It's a cylindrical tube, ornately decorated in blue and gold. 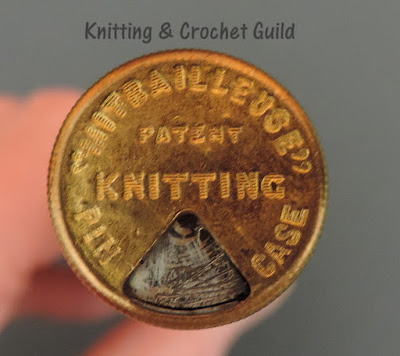 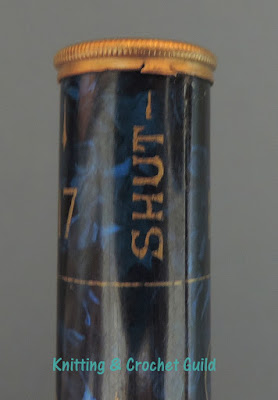 ... or it coincides with one of the open sectors, allowing the needles in that sector to come out. 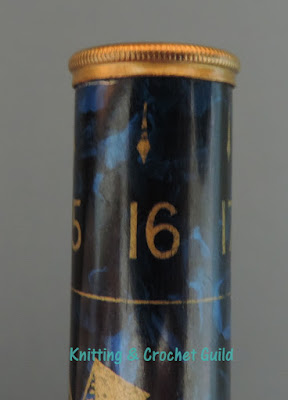 Our case only has needles in the size 15 compartment, in fact - but they are a set of four, and so possibly the original needles.

It's a very clever design - an ideal way to store several sets of needles and keep each size separate.

And why 'Mitrailleuse'?  A mitrailleuse was a type of early machine gun with several barrels, that could fire the barrels simultaneously or in rapid succession (says Wikipedia).  I  suppose the separate compartments in the needle case reminded someone (with a vivid imagination) of the barrels of a mitrailleuse.  And perhaps tipping the needles out of a compartment of the case seemed a bit like bullets being fired out of it?  A very vivid imagination.