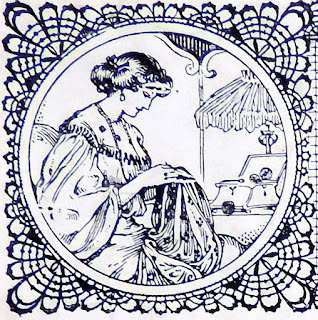 Over 150 numbers of the Fancy Needlework Illustrated magazine were published before the Second World War.  The Knitting & Crochet Guild collection has about 75% of them, including the very first number (though it's a bit tatty).


I've been assigning a date to each number - they don't have publication dates on them, but fortunately there is enough other evidence to work out when they were published. (And if you want to get straight to the dates, there's a table at the bottom of this post.)

One helpful clue is that the magazine ran regular needlework competitions, and many of our copies still have an entry coupon inside.  The closing date for entries to the competition gives a rough idea of when the coupon (and so the magazine) was printed.  That was all the information I had for a long time.  But then I noticed that the early numbers have a "To Our Readers" introductory piece that sometimes said when the next number would be published.   (Yes, I do occasionally read some of the publications in the collection, as well as sorting and listing them.)

From June 1908, the magazine was published quarterly, on February March 1st, June 1st, September 1st and December 1st.   It seems that the first few numbers were published less frequently, to test the market, but they must have sold well enough to commit to publishing more often.

Although the first number listed knitting as one of the crafts covered by Fancy Needlework Illustrated, the early numbers focus mainly on embroidery and crochet, with very little knitting. But fashions were changing, with sports coats for women becoming popular around 1910.  Fancy Needlework Illustrated followed the trend, and showed a sports coat on the cover of number 24 in December 1912.
In the 1920s, jumpers for women became very fashionable, and the covers of the magazine often showed several jumper designs, like number 59, published in September 1921.

One of the cover jumpers from no. 59 appeared in a newspaper ad the following month (so confirming the date).  The ad promoted the competition run by the magazine: "Every needlewoman in the country should put her skill to the test by entering for this Great Competition. It is open to all, and has appeal for those practically minded as well as for those of more artistic ideas. For your Jumper, or for your Embroidery, you may receive a prize of £20."  The ad was apparently placed by Ardern's, a cotton spinning company that seems to have been one of the backers of Fancy Needlework Illustrated. 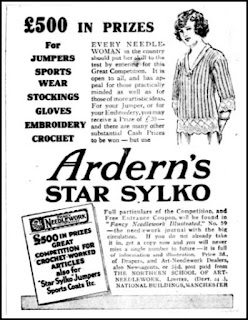 In 1923, colour was introduced for the cover of the magazine.  The first colour number was either 65 (which we don't have) or 66. 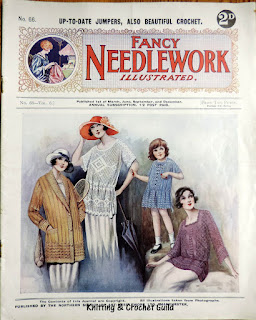 The colour covers are very attractive - they show an idealised view of some of the designs featured inside. The patterns themselves are illustrated with black-and-white photographs, so the models are real women and not the attenuated creatures on the cover.  (As with the Bexhill jumper from no. 75.)

From 1929, the magazine was published 6 times a year, in January, March, May, July, September and November.  The new dates in fact began with no. 88, which was published on 1st November 1928, rather than 1st December.

In the 1930s, the magazine focused much more on embroidery, with little crochet and less knitting, so the contents are less interesting for the Guild, and quite a few of the numbers are missing from the collection.  No. 134 (from July 1936) is unusual for that period in having knitted and crocheted garments pictured on the cover, below.  Fancy Needlework Illustrated was still backed by cotton spinning companies, and so the 1930s fashion for knitted woollies was passing it by.  No. 134 is headed "Smart Designs for Knitted & Crocheted Summer Garments" - clearly cotton is more suited to summer than winter clothes.

The restriction to cotton changed shortly afterwards when Weldon's took over the magazine.  They changed the design of the cover and started to include designs for other fibres, particularly wool.  No. 139 (below) is a Weldon's number, published in May 1937 at the time of George VI's coronation.

So now, if you have a copy of Fancy Needlework Illustrated, you can date it exactly - except for numbers 1, 2 and 4 where I'm sure of the year of publication but not the month.  The table below lists the numbers published in each year.  You're welcome.