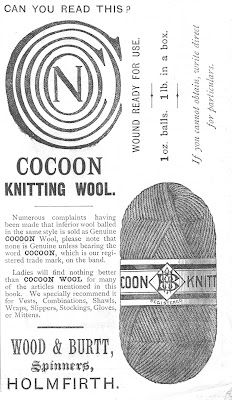 This ad for Cocoon Knitting Wool appeared in issue 3 of The Fancy Work Basket in 1885 or 1886  - see below for the front cover of the magazine.  It's a striking ad, with the logo made from the letters of 'cocoon' - it also caught my attention because the spinners' address was Holmfirth, only a few miles from here.

Most knitting yarn was sold in skeins at that time, and so the fact that Cocoon was 'wound ready for use' was its main selling point - wound into the shape of a silkworm's cocoon, in fact.   Perhaps Wood & Burtt were the first spinners to sell ready-wound wool?  Certainly, in this ad, they warn that other spinners have been copying the idea:  "Numerous complaints having been made that inferior wool balled in the same style is sold as Genuine COCOON wool, please note that none is Genuine unless bearing the word COCOON, which is our registered trade mark, on the band."

I had not heard of Wood & Burtt, so did some research into the business, via the online newspapers accessible at findmypast.  For one thing, I wanted to find out where the mill was: in fact, it was not in Holmfirth itself, but a few miles away, on Fearnley Lane, near the hamlet of Totties.

I did not expect to find out what had ultimately happened to the company, but the information was there in the newspapers.  In 1900, the spinners J. & J. Baldwin of Halifax became a public company, in association with several other spinners, including Wood & Burtt.  The name of the new company was J. & J. Baldwin and Partners Limited - the 'and Partners' referring to the associated businesses.  Edward Burtt, a partner in Wood & Burtt, became a director of the new company, and in 1920, when the company merged with Patons of Alloa, a director of Patons and Baldwins.

Back to Cocoon wool.  The only mentions of it that I found in the newspapers were in 1883: a flurry of small ads from yarn shops and wholesalers saying that they had Cocoon wool in stock, and the following description.  I think it would now be labelled "Advertisement Feature" in small print, i.e. it is meant to look as though it was written by a reporter, but is actually an ad:


GOOD KNITTING WOOL.--Knitters who have any difficulty in obtaining really good wool, would do well to try the cocoon knitting wool. The yarn is made from wools that  are specially selected with a view to their wearing well, and will not shrink, if the articles made of it are washed according to the directions issued with each ball.  It is very smooth and even, thus being very pleasant to knit with, and as it is sold ready wound in balls the worker is saved much trouble. The winding is so artistically managed that the threads are alternately interlaced with each other, so that the wool neither becomes stretched nor readily entangled.  Half the secret of the uncomfortable shrinking of knitted articles lies in the stretching of the the wool in winding.  When it is washed, it naturally returns to its original dimensions. thus causing the shrinking. With the beautifully wound "cocoon" wool this is impossible.

We don't usually think of the artistic merits of a ready-wound ball, but I suppose that when it was introduced, it must have been quite striking.   The notion that ready-wound wool will be unshrinkable is a bit fanciful, though.

Was Cocoon Wool only sold for a brief period, in the 1880s?  I have not (yet) found any references to it after 1886.  Perhaps it did not catch on at that time.  Wood & Burtt clearly made other yarns as well - the business was established in 1855, and they were described as worsted spinners.  Knitting yarns may have been only a small part of their production, so they could have dropped Cocoon wool if it failed to sell.  But they must have had a machine to wind the yarn, and maybe the idea, and the machine, was revived by the new company of J. & J. Baldwin and Partners.  We know that, somehow or other, selling knitting wool in balls instead of skeins eventually became commonplace, and perhaps Wood & Burtt's innovation directly led to that. 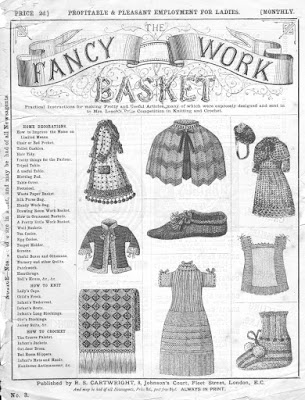