Tea at the Vicarage

At the Knitting and Stitching Show in Harrogate, I bought a copy of Stitchcraft from September 1934.  Amongst other things, it has several knitting patterns, almost all for clothes for (young, slim) women. There's one outfit for a toddler, but otherwise no men or children to be seen. The fashion then was to wear a close-fitting top with a long slender skirt, and many of the knitting patterns for jumpers look almost wearable today, except that they are probably too short for most of us - they are only 18 in. long. 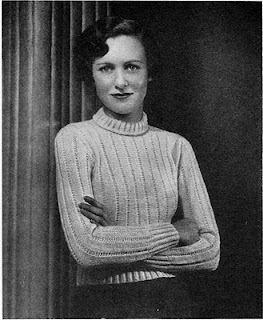 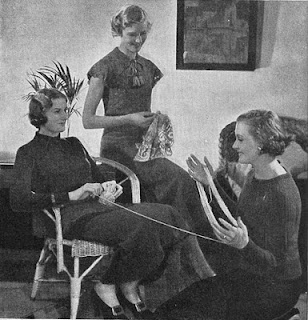 There is also a charming ad for Patons and Baldwins knitting wools, entitled "Heard at the Vicarage sewing party". Alison, Janet and Enid are discussing the jumpers they are wearing. (It's a Knit and Natter session, in fact.)
They are obviously intended to look (to a 1934 reader) young and fashionable, as they admire each other's handiwork, as well as the Patons and Baldwins' patterns and yarns.


Janet: ..... Patons & Baldwins never design stodgy styles. How do you like the bright idea I'm wearing now?
Alison: Lovely, dear. What pretty little cape sleeves! But you know I'm all for cosiness, so this long-sleeved style is more suitable for me.
Janet:  Well, the squiggly white hairs all over do make it attractive.

And so on...  (No idea what the "squiggly white hairs" are - the yarn is called Kempy.) 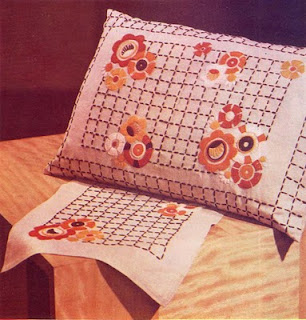 I think that the whole magazine is aimed at young women aspiring to be fashionable, though it's a bit difficult to grasp that the styles they feature were once the latest thing.  For instance, it's suggested that you could make a dressing table set with the free embroidery transfer, and it is just the sort of thing that would have appealed to my Grandma. 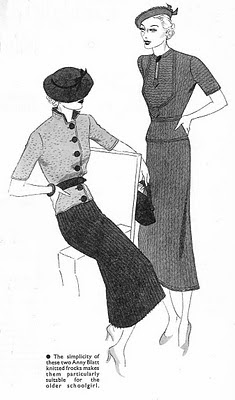 And elsewhere there is a puzzling piece about what an "older schoolgirl" could wear, by the magazine's Paris Correspondent. (Stitchcraft had a Paris Correspondent!)     "With the older school-girl in mind, I asked Anny Blatt to choose two models from her collection of knitted frocks".  The suggested outfits look very smart, though you wouldn't think of them as suitable for a teenager (especially as most girls then left school at 14).
Posted by Barbara at 10:29