On Thursday, I went to the first day of the Knitting & Stitching Show in Harrogate, which runs until tomorrow. It was held in the International Centre, which is huge, and the train to Harrogate was full of (mainly) women who were obviously heading for the show. I had not been before and just wanted to see what was happening, rather than buying much - though a lot of buying was going on. It was very busy - in some parts of the exhibition halls, there were just TOO MANY PEOPLE, and I remembered that I really don't like situations where there are too many people trying to move around. Fortunately, there were other areas that were a bit quieter.

Some random things I saw:

At the Habu Textiles stand, there was a jumper made of some kind of stiff but very fine yarn. I asked about the yarn, and it is silk and stainless steel. Could be fun to try, though impossible to unravel if you made a mistake.


I did buy a small amount of yarn, from a stand selling cashmere and camel yarns imported from Mongolia. It's a small new company called Noos, which is apparently the Mongolian for 'wool'. The yarn I have is laceweight - they had some beautiful scarves on display which I shall try to emulate. 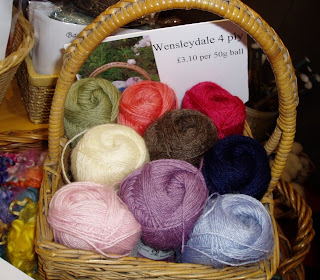 Much nearer to home, the Wensleydale Longwool Sheepshop had a stand, with some beautiful yarns. It's very soft and lustrous, in some lovely colours. I was tempted by the 4 ply in a soft red. Didn't buy any though. (I'm still practising not buying yarn, even though I didn't succeed altogether.) 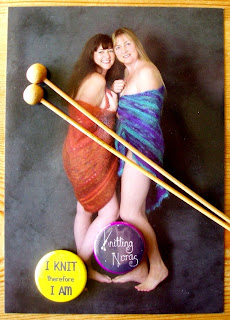 The most fun was the Knitting Noras stand.  They are a knitting group in Bolton, Lancashire, who raise money for charity in various ingenious ways, as well as meeting to knit and chat.  They produced a Naked Knitting calendar, maybe last year, and this year are selling Naked Knitting postcards, featuring members of the group. The one I bought features two of the women members wearing just strategically draped shawls - another has a couple wearing just a pair of socks each. From the same stall, I bought two pin badges and a pair of 2mm. wooden needles (to replace a bamboo pair that broke - they are quite fragile).

Note for overseas readers:  once upon a time, not very long ago in fact, schools had a regular programme of inspecting children for  head lice. The woman who did the inspections was called the nit nurse, known to the children as Nitty Nora (or even Nitty Nora the Bug Explorer). Doesn't happen any more, though of course head lice haven't gone away. And the nit nurse is, I assume, commemorated by the Knitting Noras.
Posted by Barbara at 15:52