When we were in London two weeks ago, I spent a few hours in the British Library (one of my favourite places).  I had ordered some periodicals in advance, including Leach's Sixpenny Knitting series from 1923, partly to help with dating some issues of the Sixpenny Knitting Series that we have in the Knitting & Crochet Guild collection. Now I know that numbers 25 to 38 were published in 1923.  But, much more exciting, I also recognised a jumper shown on the front cover of number 38. 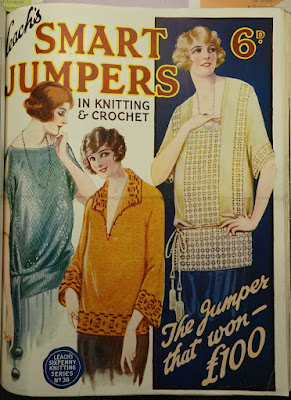 The jumper on the right is clearly the original of a jumper in art silk (or rayon) that we have in the KCG collection. 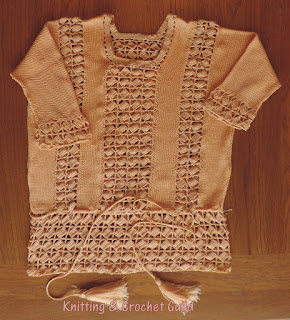 What's more, it was "The Jumper That Won £100".  The pattern instructions inside give more information: 'This lovely model won the first prize in a recent competition. You can copy it for less than twenty four shillings!'   The competition was organised by the manufacturers of Celanese artificial silk (rayon).  In an earlier issue of the Sixpenny Knitting Series, there was an ad for the competition: 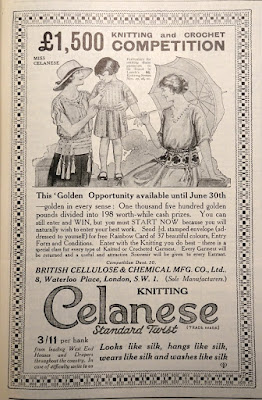 The ad shows three garments, with references to where the patterns could be found (in the Sixpenny Knitting Series, again).  So it appears that the entries to the competition were to be judged on the quality of the knitting and crochet, not the originality of the design.  But printing the pattern for a prize-winning jumper does suggest that the winner might have designed the jumper, as well as making it to a very high standard.  Either way, the prize of £100 is an astonishing amount of money, worth over £6000 now.  The total prize money on offer would be worth over £90,000, and the ad promises that "Every Garment will be returned, and a useful and attractive Souvenir will be given to every Entrant" - the costs of sending the garments back would also be borne by the company, I assume.  Of course, all entries had to be made in Celanese art silk, so the manufacturers must have been confident that the additional sales resulting from knitters wanting to enter the competition would be worth more than the prize money.

I also found a piece in the Sevenoaks Chronicle in August 1923, announcing a local winner:

£50 KNITTING PRIZE
Mrs Shoveller, of Boxmoor, Weald View-road, Tonbridge, is to be congratulated on having won the first prize in Class "D" of the Celanese Knitting Competition, the results of which were published on Tuesday.  Mrs. Shoveller, who was most surprised at this unexpected good fortune, entered a set of baby clothing, comprising coat, bonnet and gloves.  These were made with the loop stitch, one of her own invention.  The value of the prize was £50, and considering the enormous number of entries, which came from all parts of the United Kingdom, it was undoubtedly a well-earned reward......   Miss Ethel M. Curtis, of the Royal School of Needlework, acted as the judge.

I guess that Class "D" was for a baby outfit, and it appears that Mrs. Shoveller designed her prize-winning outfit herself.

Back to the pattern.  Alongside the instructions are photographs of a model wearing the jumper, which give a much better idea of what it should look like.  (Thought the lighting wasn't very good for taking photos, I'm afraid.)

It is partly knitted, in stocking stitch, and partly crocheted.  It is a very simple construction, with no shaping at all: it's made in 11 rectangular pieces, 7 crocheted and 4 knitted, which are then sewn together.  One crocheted piece is the basque, which goes around the hips, below the belt.  Here's a diagram showing how the other pieces fit together, with the opening for the neck in the middle. 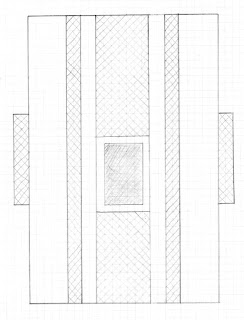 Once the 10 pieces are sewn together as shown, the result is folded in half, top to bottom, and the side seams are sewn up, and the sleeve seams, which are just 2 inch seams in the crochet strips at the sides. Then the basque is attached to the body.  The final steps are to crochet around the square neck and to make the tasseled belt.

The jumper is intended to be very loosely fitting: the circumference of the body of the jumper is 50 inches (127cm.).  The cover drawing and the photograph show the jumper with sleeves ending just above the elbow, but actually most of the 'sleeve' is a dropped shoulder.  The loose fit is not unusual for early 1920s jumpers, for instance, the 'Egyptian' jumper, which appeared in Woman's Weekly, also in 1923,  is 46 inches (117cm.) around the body.  (And it has a similar construction, being a rectangle of knitting, with a neck opening in the middle, and a rectangle for each sleeve.)

The basque of the prize jumper, however, is only 40in. (102cm.) around.  The instructions for joining it to a much wider body are: "Pleat the wide strips of knitting [at the sides] towards the side seams both at front and back (these pleats can be plainly seen in the illustrations) and gather the rest of the jumper edge. Then sew jumper and basque together, putting seam of basque to one of the side seams."  Evidently, the jumper was intended to fit someone much slimmer than the 50 inch bust measurement suggests. The 40 inch hip measurement has to allow for skirt, petticoat, etc., so the person inside would have had to be perhaps a modern UK size 8, or 10 at most.

Let's look at the jumper in the collection again.  Although I'm confident that the maker followed this pattern, she did not make it as loose, or as long, as intended. (I'm assuming a woman made it.) The central crocheted panel is narrower, the jumper is shorter from shoulder to waist, and the basque is not as deep.  A bigger change is in the side panels of stocking stitch; instead of having a rectangle which extends part way down the upper arm, she has made this piece much narrower in the body, and added on extra stitches to make a well-defined sleeve.  Consequently, the upper body and the basque have the same circumference - there is no need for pleats and gathers as described in the pattern.

We have no provenance for this jumper, so we have no idea why she made these changes.  We don't even know when the jumper was made, except that we now know it must have been in 1923 or later.  Maybe she made it several years later, when the fashionable silhouette was more close fitting.  Maybe she just didn't like very loose jumpers.  Or she might have been influenced by another photo, showing a back view of the jumper:

This appears to show the jumper with a proper sleeve - in fact, since it doesn't have a sleeve, I don't know how the photo could have been staged.  I think it's possible that our maker saw this photo and liked that shape, and then found that she had to modify the pattern to achieve it.  That's pure speculation, of course.  But I'm very pleased that I have found the pattern - and that the original jumper won a very large prize in a national competition.  I think our jumper inherits some of that glory.
Posted by Barbara at 15:41