A Chic Jumper in an Egyptian Design

There is a free knit-along in progress on Facebook at the moment (here), hosted by Ellie Reed (@drelliereed on Instagram). She has been working on the Knitting & Crochet Guild collection for the past year, scanning and cataloguing the knitting and crochet patterns in the pre-1950 domestic magazines.  As part of the project, she is running the knit-along, based on a pattern in a 1923 Woman's Weekly. The pattern is for a jumper with a band of camels, pyramids and palm trees in stranded knitting.  It's described as "A Chic Jumper Worked in a New Egyptian Design", and it was probably inspired by the discovery of Tutankhamun's tomb in November 1922, which sparked a huge interest in Egypt and its antiquities.  Ellie has knitted it already, for herself, and very successfully, and she is now knitting another for the knit-along.

The construction of the camel jumper is very simple.  The front and back are knitted in one piece, starting at the front with the colour-work band.  There are no shoulder seams: the front is split either side of the V neck, and at shoulder level the two pieces are rejoined, casting on stitches in the centre for the back neck.  There is no shaping for the waist and armholes: apart from the V neck, the front and back are just a long rectangular piece.  Each sleeve is also a rectangle.  It was common in the 1920s to make the back and front in one piece, and often the sleeves would be worked at the same time as the front and back, so that the only seams would be the side and under arm seams. For instance, here I showed a quite elaborate knit and crochet jumper pattern with that construction.

The way in which the colour work is incorporated is also unsophisticated, to an extent that would be unacceptable now (certainly, I don't like it).   The most obvious thing that I think needs changing is that the band of camels and pyramids is not centred:  the pattern repeat is 46 stitches, and you cast on 110 stitches for the body, which means that in each band, front and back, you get two complete repeats and part of the third, finishing part way through the pyramids.  To fix that, the number of stitches will have to be a multiple of 46, which is a bit tricky to manage.....

Another issue concerns the edges  - the lower edge, the sleeve cuffs and the neck band. The jumper is knitted in stocking stitch, which of course will curl, given the chance.  In the original pattern, there are 4 rows of garter stitch at the lower edge, front and back.  In my experience, that's not enough to stop stocking stitch curling up.  So I plan to make a hem at the lower edge. I have so far knitted a swatch to try it, and to see what the camels, pyramids and palm trees look like.

I decided to use something like a 4-ply, and a more usual needle size for that weight.  The yarn I have used is Rowan Felted Tweed in Ginger (a rusty orange), left over from the tam I knitted for Piecework.  The main colour is a silver grey, which I thought was also Felted Tweed, left over from knitting Louisa Harding's Old Moor design. But actually, it's Brooklyn Tweed Loft, left over from my very favourite Boardwalk pullover.  (I like silver grey a lot.)

Here's my swatch for the camel band.  It was knitted in the round, with a steek - the first time I have cut a steek.  I made a picot edge to the hem, also a first.  I'm pleased with how neat it looks.  And the hem lies perfectly flat.  (John points out that Egyptian camels have one hump and not two, but never mind.) 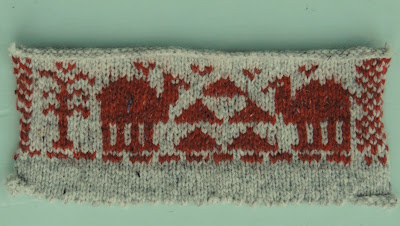 There are narrow bands of stranded knitting around the V neck, on the sleeve cuffs and along the tops of the pockets.  I think the sleeves and pockets will also need hems to make them lie flat.  The band either side of the V neck on the front is especially problematic.  The contrast colour is joined in for the 7 stitches either side of the opening, and Ellie found that it's difficult to make the colour work  neat. And apart from that, the edge will curl - she bound the inside of the neck opening with petersham ribbon to make it lie flat.  I'd rather change the pattern so that the knitting behaves itself without the aid of petersham.  So I knitted a swatch to try out making the bands separately and sewing them either side of the front neck opening.  The colour work could be a bit neater - I'll change it a bit next time. That may seem like a lot of changes to the pattern, but they are all in the spirit of the original design, I'd say.  I'm not going to knit the jumper for the knit-along, because I've got too many projects already (on the needles, or yarn and pattern all ready to go).  But I do plan to knit it some time soon.   And I shall look exactly like the sketch in the magazine. 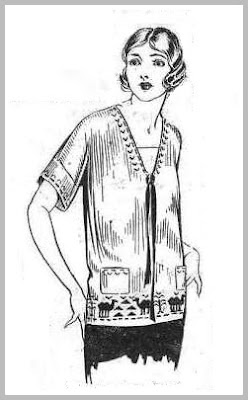