I haven't posted anything here for a while, so I'll try to catch up a bit in the next week or so.  I have been busy over on Instagram, though, where I have been showing some of my favourite patterns from the Knitting & Crochet Guild collection.  There's a lot of choice - over 50,000 pattern leaflets, not to mention booklets, magazines, etc.   So I don't think I need to restrict myself to just one favourite or just a few - I can have lots, why not.

I wrote an earlier post about similar Copley's leaflets here - the designs are quite appealing, but what I really like is the fashion advice on the front of the leaflet from one of two "fashion advisers", Lady Georgiana Curzon and later the Countess of Chester. In leaflet 331, Lady Georgiana tells you why you should knit this cardigan:

COPLEY'S FASHION ADVISER says : "Our old and tried friend the cardigan .. how could we live without it ? On the golf course or the moors, in the car or on foot, smart women still cling to that classic style. It modifies slightly with fashion; it raises or lowers its vague indication of a waistline, it alters the number of its buttons, or its length. And it still remains the smartest and most comfortable sports woollie of all. Here is to-day's version; simple, subtle, in a stitch that gives a fascinating check and a Copley wool that will stand up to endless wear and washing. No matter what colour your skirt, you'll find the most perfect match or the smartest contrast among the superlative range of Copley colours."

All of which still applies, though I suspect that even then golf was a minority interest for women - but it had the right upper class ring to it.  And I think that when Lady Georgiana mentions the moors, she has in mind grouse shooting.

I was intrigued by her description of  "a stitch that gives a fascinating check", because in the photo of the cardigan, it looks like some sort of rib.  So I looked at the instructions, and it's not any sort of rib, or any stitch pattern I have met before.  I knitted a swatch to see what it looks like: 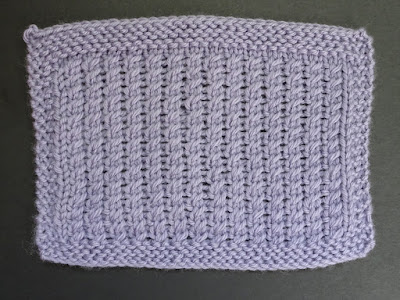 Here are the instructions (not exactly as they appeared in the pattern - I've rewritten them in a way that makes more sense to me).


So it's much more like stocking stitch than a rib. The yarn-overs make little ladders separating the columns of pairs of stitches twisted together.

I found it a bit tricky to knit, especially at first. The knit rows are easy, but purling the second stitch on the left needle was quite difficult, especially as I was knitting with my vintage Double Century needles which have rounded tips.  I switched to a sharper KnitPro needle for the purl rows part way through, and that was much easier. I also found that I needed a lot of left-elbow room for that step, so it wouldn't be suitable knitting for a train journey.  (I never need much right-elbow room when I'm knitting with straight needles, because I have the right needle tucked under my arm.)

I wouldn't describe it as a check pattern, but it gives a very nice effect.  It's quite loose - for me, it's looser than stocking stitch, so you would have to be careful of gauge.

The swatch also gave me an opportunity to try out a ball of Yarn Stories 100% merino DK.  It's a worsted-spun yarn, spun in Yorkshire (in fact, in Slaithwaite, where the Knitting & Crochet Guild collection is now based).  So it's very smooth and gives great stitch definition, ideal for a swatch like this.  And it feels gorgeously soft.  I'll be planning a project to use it some time soon, I'm sure.
Posted by Barbara at 12:33