Yesterday, a packet arrived through the post with three copies of the current (Winter 2018) issue of Piecework magazine.  If you don't know it, Piecework is an American magazine, published by Interweave, that covers the history of needlecrafts.


I was sent the copies because I have an article in this issue.  Earlier this year there was a call for articles on needlecraft magazines, so I decided to write about Fancy Needlework Illustrated.  It is one of the magazines in the collection of the Knitting & Crochet Guild, and a favourite of mine (I have written posts about it several times, e.g. here).  I especially like the covers of the 1920s issues which have charming colour illustrations.

As well as the magazines themselves, we have several pieces of filet crochet in the Guild collection that were made to FNI designs, so there was plenty to write about.  I have written a few times in this blog about the "Welcome Home" tea-cloth pattern appeared in 1915 - evidently a design that appealed strongly to women left at home when their men joined the armed forces.  We also have several examples of the "Dresden" tea-cloth, a very popular design from FNI that is featured in the article - and appearing here in an ad for Ardern's Crochet Cotton that shows a guest at afternoon tea admiring her hostess's handiwork: 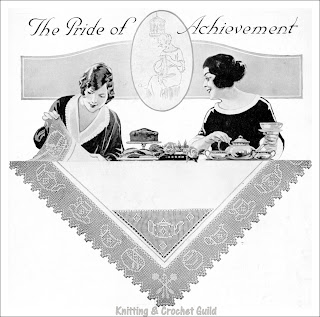 There is also a project to accompany the article, to knit a very pretty 'Tea Rose Scarf', designed by Katrina King. 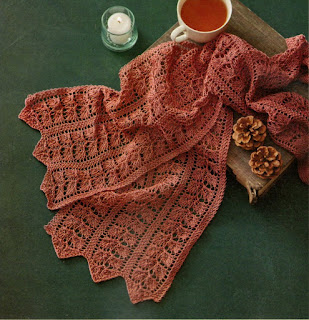 I sent photos of several pretty jumper designs from 1920s issues of Fancy Needlework Illustrated as possible sources for projects, and this is the one that inspired Katrina:

I think the jumper itself is pretty, if a bit shapeless.  In the usual 1920s knitted jumper style, the sleeves are made in one piece with the front and back.  Often in 1920s patterns the whole jumper is knitted in one piece, but in this case because the lace pattern has a definite direction, the back and front are knitted separately in two T shapes, finishing with several rows of moss stitch (to match the panels of moss stitch between the rose leaf panels).  Then the moss stitch edges are grafted together on the shoulders.   Katrina's scarf also has a graft in the middle, for the same reason - so that the lace pattern is going in the same direction at both ends of the scarf.  All the designs in Fancy Needlework Illustrated are for cotton yarns, as I explain in the article, and the tea rose scarf is also knitted in cotton, so it represents the magazine very well.

There are some fascinating articles elsewhere in the issue, including several others on needlecraft magazines. or on novels featuring needlecrafts (including a knitted fichu inspired by illustrations to Louisa M. Alcott's Little Women).  Another knitting project that I like very much is a pair of lace fingerless mitts in cotton, based on traditional Russian festival costume.  (Do I have a suitable festival coming up where I could wear white cotton lacy mitts?)  I'm proud of my article and very pleased that the issue is full of other interesting content too.
Posted by Barbara at 14:35