I said last month that I was knitting a pair of fingerless mitts in twined knitting - all inspired originally by somehow volunteering to do a workshop in twined knitting for the Huddersfield Knitting & Crochet Guild.  (I think I might have been hypnotised.)  I finished those mitts, which I intended to be for me, but then someone asked me to write the pattern, and I decided that if I was going to do that, I'd like to change it a bit.  So I gave the first pair to my daughter, and made another pair for me.

The wristlets I designed as the workshop project were knitted in two colours - you switch colours for (almost) every stitch, twisting the yarns each time.  For the mitts, I used two strands of the same colour, again alternating the strands for each stitch.  (That's the original use of twined knitting, I believe - it's called two-end knitting in Swedish, and  you can use both ends of one ball of yarn.)

Here are my second pair of twined knitting mitts: 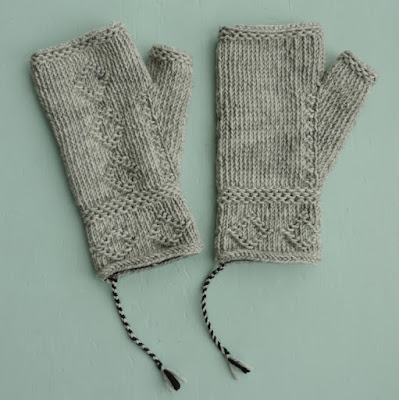 I'm calling the design Aspen, because the diamonds on the back of the hand and the cuff reminded me of the diamond shapes on the bark of aspen trees at Harlow Carr garden in the autumn - and aspen trees grow in Sweden, where twined knitting also comes from.

Twined knitting gives a very nice texture.  Apart from the areas of pattern, it looks similar to stocking stitch on the right side, but actually it feels slightly ridged.  (Taking one strand across the back as you knit a stitch with the other strand pulls the fabric in a bit and makes the right side of each stitch tighter than the left.  At least that's what happens when I do it.) 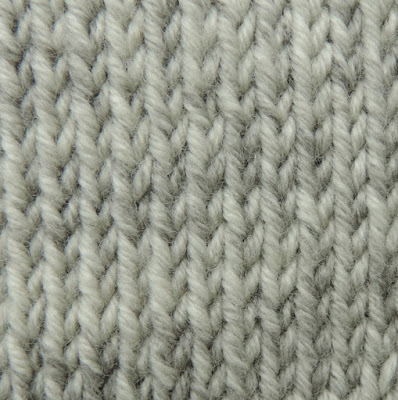 And the wrong side looks very different to stocking stitch: 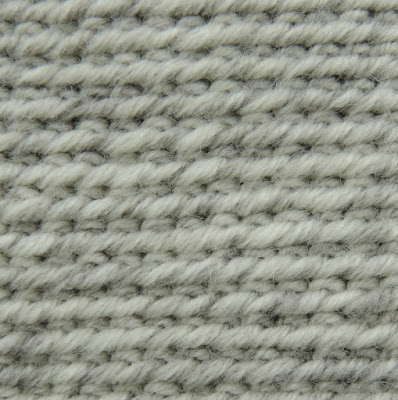 Susie's mitts are only slightly different to mine: 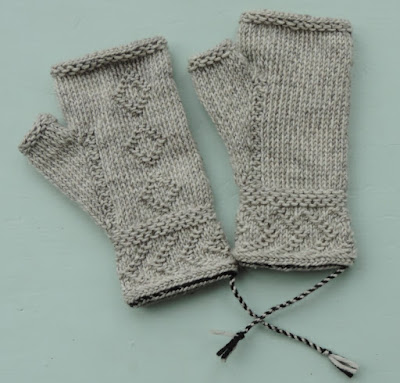 They have chevrons on the cuff, and the border to the thumb gussets is a bit different.  I've taken the elements of the designs from the book by Birgitta Dandanell and Ulla Danielsson, Twined Knitting - A Swedish Folkcraft Technique, which is full of photos of original garments of all kinds. The English translation was published by Interweave Press in 1989, and is out of print, but I've been able to borrow a copy from a friend.

The yarn for both pairs of mitts is Debbie Bliss Rialto Heathers, which is a beautifully soft merino DK. The colour is Pebble - a lovely silver-grey, very like aspen bark. (There's also a little bit of black for the cast-on, and the plaited braid.)  Twined knitting in DK yarn gives a very thick fabric - these mitts are very warm and cosy.

I've now knitted two pairs of mitts and two and a half pairs of wristlets in twined knitting.  (I wrote about the 'half pair' here.)   I made one pair of wristlets for the workshop - a refinement of a previous pair, which I haven't shown.  Here it is: 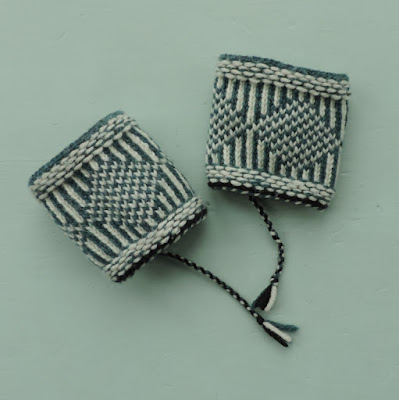 I have a cardigan in the same dark teal colour, so I've worn these wristlets quite a lot - they really help to keep you warm.  For the workshop pair, I dropped the third colour for the cast-on edge, and the plait - I wanted to keep casting on as simple as possible. 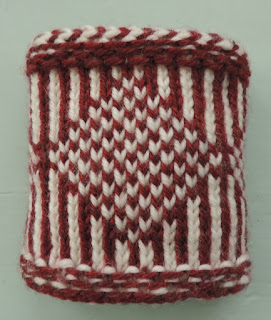 I think I've done enough twined knitting for now.   I like the effect very much, but it's slow to do (because you have to keep stopping to untwist the yarn) and you don't always want your knitting to be thick and wind-proof.  I'm doing the workshop for the Birmingham branch in April, so that might inspire me to take it up again, but at least until then, that's it for twined knitting.
Posted by Barbara at 13:30