It's been an exciting week at the Knitting & Crochet Guild collection.  I had accepted two donations of publications and they arrived though the post.  One is a wonderful collection of booklets and leaflets, published around 1920 - most of them I have never seen before.  Here is a selection: 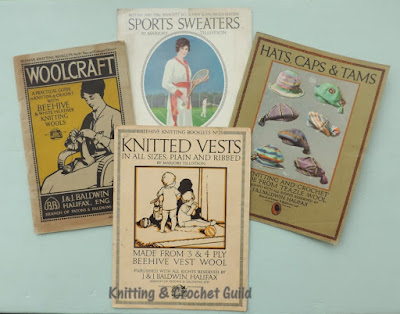 We already have copies of that edition of Woolcraft, but not in such good condition - the other booklets are entirely new.  But this donation deserves a post to itself (later).

The other donation consisted mainly of collections of crochet samples, bound into notebooks.  I will perhaps write more about those in another post as well  (although crochet is not my thing, especially fine cotton crochet of the kind in the notebooks.)  An unexpected bonus with this donation were some very old magazines, including copies of Fancy Needlework Illustrated and Weldon's Practical Needlework.


Fancy Needlework Illustrated is awkward to scan - the printed area is larger than A4.  So the ilustration below is just part of the front cover.  Evidently it was also an awkward size for readers, too - this copy has been kept folded across the middle for a long time. Issue No. 64 is from the early 1920s, I guess.  (They aren't dated.)  Knitted or crocheted dresses often featured in the needlecraft magazines of that time - like the one on the left, with the model soulfully examining a rose. The dresses are so shapeless and droopy - not at all attractive to my mind.  It's amazing that only ten years previously, women were tightly corseted into the very structured Edwardian gowns - now they appear not to be wearing any corsets at all (although I'm sure they must have been).


We think of 20s fashion as a very straight slim silhouette - but I think that's more typical of the later 20s.  At the time of this magazine, dresses seem to have been quite roomy on the hips (it looks as though the models might have been wearing quite bulky petticoats).   I don't think it works - if you're going to have no bust and no waist, you have to have slim hips too.

But as well as dresses, there were jumpers, and these are more successful, I think - they often have a belt, for one thing.  Here are two from the same magazine.

The Clovelly jumper is a T-shape,  in stocking stitch with panels of filet crochet.  The Wingrove jumper also has knitted sections, in stocking stitch with a regular pattern of eyelets.  The crochet pieces are done in a sort of large-scale Irish crochet, in a design of leaves and bunches of grapes.  The drawstring waist was very common in jumpers of that time - and at least it did give you a waist.

In the same parcel was an issue of Weldon's Practical Crochet - no. 77 in the Practical Needlework series.  Our copy has several ads for knitting comforts for the troops, and so must have been printed during the First World War, but Weldon's kept these magazines in print for a long time, and I think it may have been originally published earlier than that.  (A note on the first page of the magazine says "Over 360 Numbers now ready, and always in print.")


It is subtitled "How to Crochet Useful Garments and Articles for Ladies and Children."  It has patterns for babies' and children's clothes, including 'bootikins'  (which made me smile, because that's Mary Beard's translation of Caligula).  There are a couple of household items - antimacassars and coverlets - but no women's clothes except underclothes. And there are patterns for toys, including the very charming elephant on the front cover. And a toy lamb, too - though I don't think that's as successful.  Perhaps better in reality, in white wool, than in the engraving. 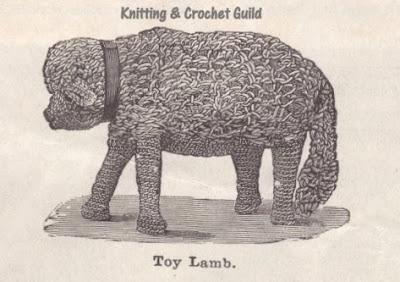 Some of the clothes for babies and children seem needlessly complicated.  Here's a child's dress in tricot (Tunisian crochet?) and crochet.  Not a garment to encourage active play - more suitable to sitting quietly to read an improving book. 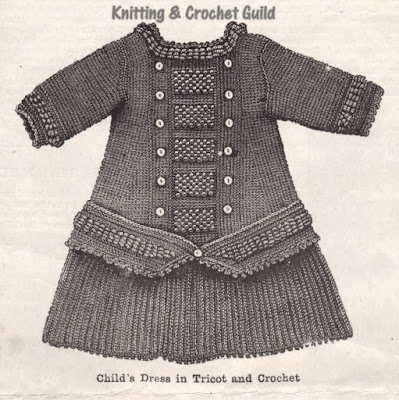 This dress and other patterns in the magazine make me think it's much earlier than the First World War.  The Practical Needlework series started in 1888, it was published monthly, and No. 77 is part of Volume 7, so I think it might have been first published in 1895 or thereabouts.  (Which is very inconsiderate to someone like me who is trying to assign a date to a publication and might be seriously misled by the ads.)

More later on the other publications that arrived this week.
Posted by Barbara at 13:10