I'm doing a workshop on the Shetland lace pattern, Print o' the Wave, next week, and so I've been looking into its history.  I first saw the pattern at the In the Loop conference  in Winchester in 2012, when someone showed a photo of a garden fence on Shetland knitted in garden twine, I think, in Print o' the Wave - it looked wonderful.  (I wanted to buy some twine immediately to knit one too.)


I wrote earlier about the Shetland Museum's Study Day on “Authenticity in 'Shetland'Lace Knitting”. Part of the project looked at 19th century knitting patterns that claimed to be based on Shetland lace patterns.  The online material on the project says “Edinburgh-based Jane Gaugain published the earliest knitting books in Victorian Britain.  Her patterns are also the most authentically Shetland.”

Mrs Gaugain says of this pattern “This Shawl is exactly in appearance like the Shetland Shawls, only the centre stitch is more novel than any of them I have ever seen” - the centre stitch is Print o’ the Wave.  Her instructions specify that alternate (wrong side) rows are purled, but she goes on to say “all the pearl rows, like the Shetland Shawls, may be worked as plain rows”, i.e. you can knit the wrong side rows rather than purling them.  It’s not clear whether the version with knit rows instead of purl rows already existed as a Shetland lace pattern - she claims that the version she is presenting is novel, but there may already have been a similar stitch used by Shetland knitters.

When I first looked at her pattern, I could not understand how anyone could look at it and identify Print o' the Wave - there is no illustration in the book.  But then I found another volume in the Winchester School of Art library, an Accompaniment to The Lady's Assistant, published in 1845, with illustrations of the patterns.  It had an illustration of the shawl that shows the Print o' the Wave pattern clearly (even though it's printed upside-down). 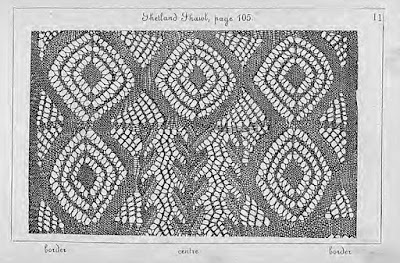 The shawl has a 52-row border to begin with (shown at the top of the illustration), and Print o' the Wave then starts in row 53, with a different pattern at each side.

It's not easy to disentangle Print o' the Wave pattern from these instructions.  The abbreviations are not the problem, though they look a bit intimidating - you just have to translate P (for Plain) as knit, T (for Take in) as knit 2 together, and O (for Over) as yarn over.  But you have to figure out which are the edge stitches and where Print o' the Wave begins (and ends).  After some puzzling, I managed to extract the relevant part of the pattern and knit a swatch (see above).

The only difference between Mrs Gaugain's Print o' the Wave and modern versions is that all her decreases are done by 'T' or knit 2 together, i.e. a right-leaning decrease.  These days, the pattern is made more symmetrical by using right- or left-leaning decreases as appropriate.  (Though actually the difference is not as obvious as I expected.)    It must have been her deliberate choice to use the same decrease throughout the pattern, because else where in the book she uses  both kinds of decrease. Probably she just used knit 2 together because that was what Shetland knitters were doing at the time.

I found a later published version of Print o' the Wave from the 1880s in Mrs Leach's Fancy Work Basket.  (We have a copy in the Knitting & Crochet Guild collection, though it's also available online.)   The pattern there is called "Leaf and Trellis Pattern for Curtains".  Like Mrs Gaugain's pattern, all the decreases are done by knitting 2 together, so quite possibly, it was based directly on her book.  (Though it doesn't of course credit her, or mention Shetland.) 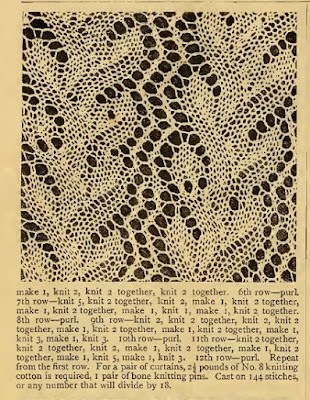 Again, the illustration is upside down. But what's especially notable about it is that the sample is full of mistakes.  It's recognisably Print o' the Wave, but with extra holes added.  I think the instructions might be correct (I haven't checked) because the mistakes are random. It's atrocious.  You'd think that someone could knit a small swatch for publication without mistakes - it wouldn't encourage a reader to knit a whole curtain otherwise.  But Mrs Leach obviously needed a lot of material to fill her magazine, and this pattern is only a few column inches, so  perhaps there wasn't time to worry too much about accuracy.

Mrs Gaugain did not call the pattern Print o' the Wave. (She didn't call it anything.)  But I guess that the pattern continued to be used by Shetland knitters, and it acquired the name at some time.  I don't know when, but certainly it was certainly before 1938, when it was named and illustrated in Mary Thomas’s Knitting Book.  It is claimed there to be one of only ten ‘truly native’ Shetland patterns.  (The others include Old Shale.)

I've now knitted several swatches of different versions of Print o' the Wave for the workshop, and I still think it is a beautiful pattern.  I'll have to knit something larger than a swatch next.
Posted by Barbara at 23:07