At the Guild Convention

I'm just catching up after last weekend away at the Knitting & Crochet Guild's annual Convention.  As last year, we were in Sheffield at Endcliffe Village.  This week is also busy, so I don't have time for a very detailed account, but I must mention a couple of the highlights.  On Friday evening, Susan Crawford gave the after-dinner talk, about The Vintage Shetland Project, her new book (due mid August).  She has recreated hand-knitted pieces in the Shetland Museum collection, and the patterns will be published in the book.  On Friday, she brought several of the recreated knits, and they are wonderful.  All in fine yarn - mostly wool, but there is also a pullover in fine silk which is especially beautiful.   I am so looking forward to seeing the finished book.

We had two workshop sessions during the weekend, led by Guild members.  On Saturday afternoon, I went to one on Victorian knitting patterns, led by Lesley O'Connell Edwards.  She had brought copies of several patterns that she had knitted herself, including a very pretty bag in many different shades of green and red/orange/yellow/cream.  (The colour in the photo is not very accurate, I'm afraid.) 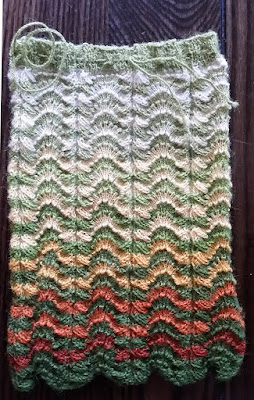 The pattern is "Shell Knitting for  Bag, in German Wool", from Exercises in Knitting by Cornelia Mee (1847).  Lesley went through the pattern with us, to show that Victorian knitting patterns have to be used with caution, because they are often wrong.   In this case, the  number of stitches to cast on is wrong - not easy to correct, because the instructions for the first round are also wrong, so it's hard to figure out how many stitches there are in each pattern repeat and she doesn't say how many pattern repeat there are.   And the number of stitches in a pattern repeat changes in every round, for the five rows of the pattern.  And to make it still more difficult, there is no illustration to go with the pattern, so you have can't go by what it's meant to look like.  So I'm amazed that Lesley managed to work out what Cornelia Mee meant to say, and knit a very pretty little bag.  (It's in very fine wool, on tiny needles.) 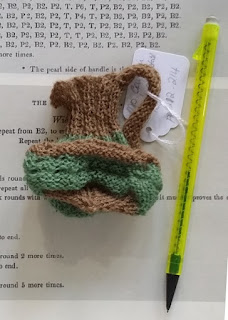 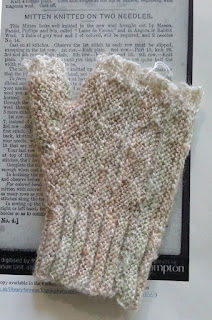 She provided us with three colours of fine wool, and we had brought 2mm needles, so that we could try one of the patterns. 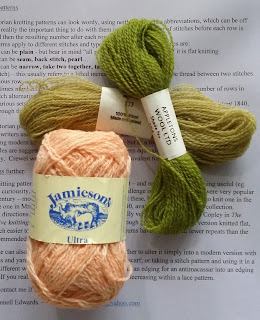 I chose Cornelia Mee's (corrected) shell pattern, but only did three pattern repeats instead of the eight needed for the bag.  And one of the other workshop participants gave me one of her skeins of Appletons crewel wool, because she was knitting the pence jug and so only needed two of hers.  Now I have a very pretty little wristlet in four colours. 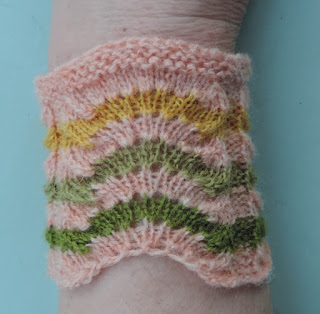 Really, it's a swatch knitted in the round, but I'm knitting a lot of wristlets lately, and it fits my wrist, so I'm thinking of it as a wristlet.

It was fascinating to see how the patterns turned out in practice.  We did wonder how ladies in 1847 managed to understand Cornelia Mee's pattern and correct her mistakes.  Perhaps they got together in knit-and-natter groups to pool their ideas?
Posted by Barbara at 15:18