At the Fashion Museum

A bit late, but still...  Last Saturday, I did a trunk show for the Bath branch of the Knitting & Crochet Guild, which meets at the Fashion Museum in Bath.  John came with me, and we spent a few days in Somerset, staying near Bath and visiting Wells, Frome, several lovely little villages, an exciting cemetery in Bristol (Arnos Vale), as well as Bath itself.

A trunk show is an excuse to get out some of my favourite things from the Guild collection.  Here is a one that I have only recently linked up with its pattern - a beautiful crochet blouse designed in the early 1950s.  The original blouse won a first prize in the 1951 Daily Mail Knitting Contest, and the pattern was published in a supplement presenting the winners in the various categories.   I am really not a crocheter, but when I see such fine work as this, I want  to try it myself.  I'm sure it would end in tears, though. 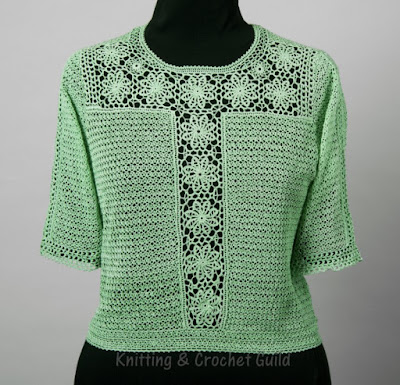 And here is Rosemary, Fashion Museum manager, helping to display the 1950s waistcoat I wrote about in an earlier post. 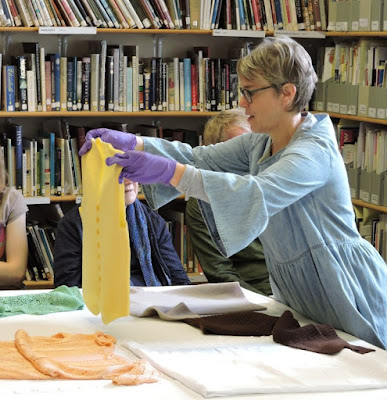 Since I wrote that post, we know a little more about the waistcoat. The knitter made it for her husband-to-be in 1953.  He wore it at work, over a coloured shirt - very unusual for the 1950s.

On Saturday afternoon, after the trunk show, we visited the current exhibition at the Fashion Museum, A History of Fashion in 100 Objects.  As well as showing the developments of fashions through time, the exhibition showed some wonderful garments. I was on the look-out, too, for  knitting and crochet, and there were three examples on show.  One was a white crochet blouse, made in the 1950s to a Coats pattern. 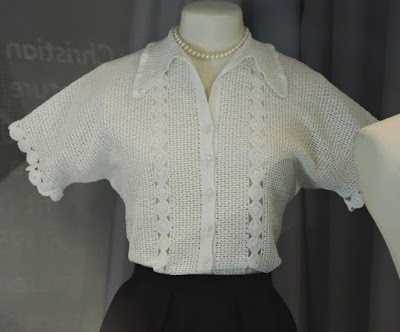 The model is Patricia Squires, looking even more elegant than she usually did.

The only knitting that I saw was a jumper in red, white and navy, that I also recognised - partly because it was knitted in the same colours as in the pattern. 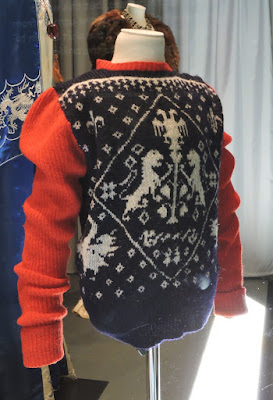 It's  a striking design, though a very long way from traditional Fair Isles.

Finally, there was a crocheted beach outfit from the late 1960s. 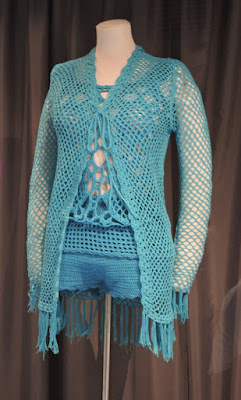 The label said that the original outfit had been shown in Nova magazine, and was copied from the photo for the woman who wore it (and eventually gave it to the museum) by a woman in Athens.  Hopefully, it was worn over a bikini top, though then the outfit might have been too hot for a Greek beach in summer. (See-through tops weren't new in the 1960s, in fact - as you can see from the Coats crochet blouse pattern.)

We had a very good short break in Somerset - but no more knitting or crochet was involved after the Fashion Museum, and I shan't report on all the not-knitting we did.
Posted by Barbara at 21:45