[This was written, apart from minor tweaks, before I broke my wrists. As John said in the last post, I shan't be doing any  knitting for a while.  I might be able to write posts about one or two of the pieces in the Guild collection, but I'll see how it goes.  Broken bones are quite tiring, apparently.  Now read on....]

In an earlier post, I wrote about the Hope family of Ramsgate:  Isaac Hope, his wife Margaret and their son George Curling: they kept a fancy goods store in Ramsgate in the 1840s, that also sold Berlin wool and other needlework supplies.

Mrs Hope and George Curling Hope between them wrote or edited several books on knitting and crochet in the 1840s, one of them being The Knitter's Friend, which was first published in 1844, but ran to several editions.  It was promoted in The Knitter's Casket, a later book by Mrs Hope:  "This book has an unprecedented popularity;  it is the clearest book on its subject, and is welcomed as a 'friend' by every knitter." (But she would say that, wouldn't she?)

My copy (illustrated) is one of the later editions - it dates from 1847. 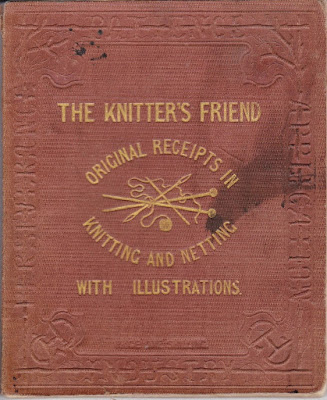 The title page says that it was edited by Mrs. Hope.  I don't know what editing involved precisely, but  a notice at the end of The Knitter's Casket says:


"In return for an original receipt in knitting or netting forwarded to the editress for publication, she will be happy to send free to any part of the kingdom a copy of the volume in which it appears.
None can be accepted which are not original, and a small specimen would be an advantage."

So I guess that the books edited by Mrs Hope were compilations of patterns that she had collected.  A free copy of one of her books (price 1 shilling, or 5p) doesn't seem a great reward in exchange for a pattern, but presumably the scheme of asking for patterns from readers worked.  It couldn't have been used for The Knitter's Friend, being Mrs Hope's first book, but perhaps in that case the 'receipts' were solicited from her customers in Ramsgate.

Mr Hope's role in  The Knitter's Friend is clear: he was the publisher.   He also used the book, in my edition, as a platform to promote another enterprise of his, Hope's Protective Labels. 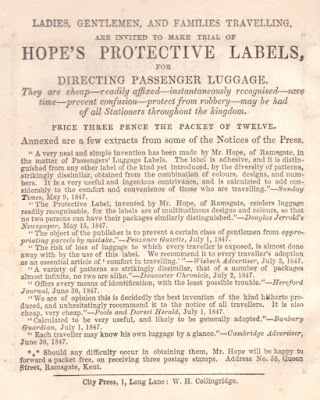 (Click on the image for a larger view).  Some of the text is below:


LADIES, GENTLEMEN, AND FAMILIES TRAVELLING,
ARE INVITED TO MAKE TRIAL OF
HOPE'S PROTECTIVE LABELS,
FOR DIRECTING PASSENGER LUGGAGE.
They are cheap—readily affixed—instantaneously recognised—save time—prevent confusion--protect from robbery—may be had of all Stationers throughout the kingdom.
PRICE THREE PENCE THE PACKET OF TWELVE.

Annexed are a few extracts from some of the Notices of the Press, "A very neat and simple invention has been made by Mr. Hope, of Ramsgate, in the matter of Passengers' Luggage Labels. The label is adhesive, and it is distinguished from any other label of the kind yet introduced, by the diversity of patterns, strikingly dissimilar, obtained from the combination of colours, designs, and numbers. It is a very useful and ingenious contrivance, and is calculated to add considerably to the comfort and convenience of those who are travelling."—Sunday Times, May 9, 1847.
"The Protective Label, invented by Mr. Hope, of Ramsgate, renders luggage readily recognisable, for the labels are of multitudinous designs and colours, so that no two persons can have their packages similarly distinguished."—Douglas Jerrold's Newspaper, May 15, 1847.
"The object of the publisher is to prevent a certain class of gentlemen from appropriating parcels by mistake."—Penzance Gazette, July 1, 1847.

Passenger rail travel had become increasingly popular in the 1840s, as the network of railways spread across the country, and these luggage labels were evidently addressing a problem that had arisen, though I'm not sure whether the main problem was that passengers couldn't recognise their own luggage, or that it was getting stolen.  And was the luggage unaccompanied, or travelling with the passengers but in the luggage van?  I can't imagine what the labels looked like - I'd love to know.  But I think that they can't have been very successful - I have seen no later mention of them.

So that's Margaret (editress) and Isaac (publisher and advertiser).  What of George Curling Hope?  He used The Knitter's Friend to advertise his Cornucopia knitting needle gauge.  I think that he also did at least two of the illustrations that accompanied the receipts in the book, because they are signed with his initials, G C H, though in both cases his initials are followed by something illegible.


If he did draw these, I think he might have drawn other illustrations too, because the captions look to be in the same hand-writing.

George Curling Hope probably designed the covers of both The Knitter's Friend and The Knitter's Casket as well, because his monogram appears in the bottom corners of the back and front covers - the same monogram as on the Cornucopia gauge, though with added plant tendrils to fit in with the rest of the design. 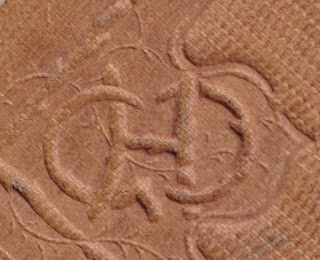 So The Knitter's Friend (and later The Knitter's Casket) was not just Mrs Hope's work, but a Hope family enterprise.  Both can be downloaded from the Richard Rutt collection in the Winchester School of Art library here and here.  I'll talk about the other works produced by Mrs Hope and George Curling Hope in the 1840s in a later post.