I haven't written for a while - I just haven't been in the mood.  Sorry about that.

But I've been knitting, of course.  What I'm knitting at the moment is a birthday present, so I can't write about that.  I'll write instead about a couple of things I finished a little while ago that were practice pieces for a workshop I am doing next month on Swedish Twined Knitting.  I wanted to design something small that would show the techniques and a few different stitches.  Twined knitting is traditionally worked in the round (and I think is better done that way), but for people at the workshop who would prefer to knit flat I have devised a small sampler that might be construed as a coaster - I'll show that later, maybe.  And the smallest useful thing I could think of that's knitted in the round, and would show off the fact that twined knitting is dense and warm, is a cuff or wristlet.   So here's the one I've made: 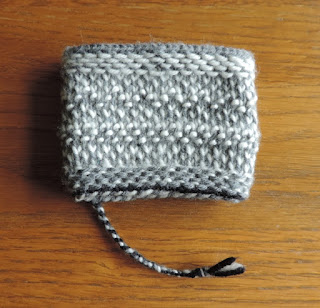 In twined knitting, you knit with two strands of wool, alternating after every stitch.  My first practice pieces had both strands in the same colour, but for the cuff I was experimenting with two different colours. It's also, I've read, traditional to use a contrast colour for the cast-on, and then to make a braid with the cast-on ends rather than sewing them in, so I've done that too.

You can make patterns if you're knitting with two strands of the same colour with purl stitches on a stocking stitch background, and I tried that in my cuff.  Oddly, although the white purl bumps show up reasonably well on the grey/white background, grey purl bumps don't at all - having tried that, I unravelled it.

The inside is very neat, and shows how you always take one strand over another in the same direction, which gives twined knitting its thickness and stretch - and results in the two strands getting twisted (or twined) together, so that you have to keep stopping to untwine them. 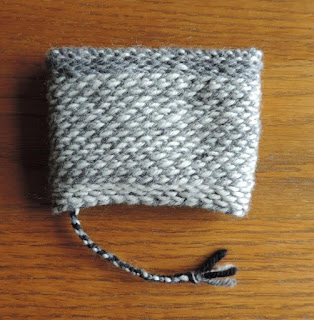 And here's a slightly strange shot of an upside-down cuff, showing the cast-on edge, with black yarn. 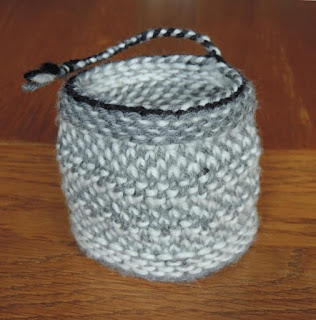 Do cuffs normally come in pairs? Perhaps they should, but I'd get a severe case of  'second sock syndrome' if I knitted another one of these.  I like it very much, but it was intended partly as an experiment to see what twined knitting looks like in two colours, and I don't want to repeat it.  But I have a good reason for only knitting one:  I have a sweater I bought this winter that I like very much, and a cuff (one cuff) is just the thing to go with it. 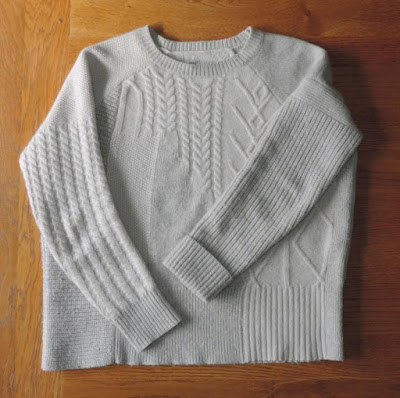 It's an asymmetric design, with seams in odd places, and pieces knitted sideways, and you can see that the cable pattern on the front is asymmetric.  One sleeve is cabled, with a moss stitch top, and the other is in fisherman's rib with a stocking stitch top.   It's so asymmetric that one sleeve is longer than the other. (I'm not sure if that's intentional, but I've decided that it's a design feature.)  I've been wearing the longer sleeve turned up, to even them out - and now I can wear my one cuff on the other sleeve.