I wrote in November here that I had been browsing around for patterns like the flame stitch I had seen on a shawl in the Chanel to Westwood exhibition, and found Xandy Peters' Petal Cowl pattern. I finished it a while ago, so it's about time I wrote about it.

The pattern is designed to show off a self-striping yarn (4-ply), and Lydia at my local yarn shop in Huddersfield stocks some very nice ones.  I chose Louisa Harding's Amitola, a delectable wool/silk mix.  The colour is called Gothic, don't know why, and it's not turned out as stripy as I expected - it's more a blend of shades of grey and dark purple, with an occasional flash of red.  But never mind - I love the effect. 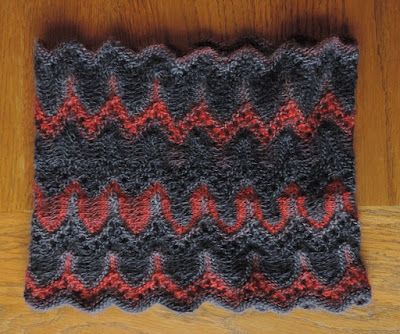 I reduced the diameter by a third.   This was my first attempt at a cowl and I thought I would feel more comfortable wearing something smaller. Also, the pattern tells you to cast on 300 stitches, increasing to 550, and I didn't feel up to tackling a complicated pattern over that many stitches.   So I reduced the starting number of stitches to 180.

I should also point out that I wear it upside down - the cast-on edge is at the top.  That's because I think it looks better with a red stripe close to the lower edge, rather than a lot of grey.

It is a complicated pattern, and there were a couple of rows in the pattern repeat when I just had to plod through the instructions over and over.  But towards the end I felt I understood more what was going on.  It took me that long because I didn't do a test swatch - I decided that tension wasn't going to be that crucial, and knitting a test swatch in the round just to try out the pattern seemed like a waste of time.  I may have been wrong about that - it did feel when I had finished that really the whole cowl had been a test swatch, and I ought to knit it again now that I understand how it works.  And I must confess that there are a few mistakes in the knitting. Once or twice I purled a round instead of knitting, through misreading the pattern, and decided to live with it rather than going back.  (On reflection, it's ridiculous that the mistakes are on the plain rounds where you just knit every stitch, rather than on the really complicated rounds, where you have to keep counting stitches.)

Now it's finished, I love it. It's warm, it's soft, the colours work really well with the design, the stitch pattern is absolutely fascinating.   I'm quite converted to wearing a cowl - I shall have to knit some more.   And it was, in spite of the trickiness of the stitch pattern, a quick knit - I finished it in two or three weeks. 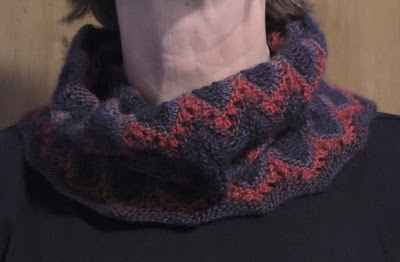 I have thought about knitting Xandy Peters' Fox Paws pattern  ('recommended for the adventurous') as a follow up, but I'm not sure I'm feeling adventurous enough.  And I've read Yarn Harlot's blog posts about knitting Fox Paws, particularly this one, and I'm not sure I want to have to concentrate      that much on what I'm knitting. Not just now.
Posted by Barbara at 22:23